I doubt I'd have been able to discuss The Echo Maker if I hadn't found something I thought was wrong with it. It's almost too daunting. "You stagger out of Powers’s novel happy to find yourself, like Scrooge the morning after, grasping your own bedpost, saying 'There’s no place like home,'" says Margaret Atwood in The New York Review of Books, "and hoping you still have a chance to set things right."
And Patrick Ness in The Guardian: "His books seem wrought rather than written, and try as he might, he can't help but make you feel just that little bit stupid." 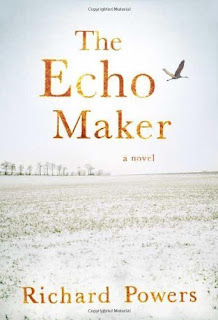 I feel a little bit like Homer Simpson would trying to write about Finnegan's Wake, but I’m too stubborn to shirk making an effort, if only just to stitch together some of the erudite observations by vastly more sophisticated readers who dared to step forward and put them on the record. The Echo Maker, after all, is a must read for anyone busy being born, not busy dying (to steal shamelessly from a Nobel laureate).
And for those readers perched on the edge of their seats eagerly seeking an opening to accuse me of oversimplification with my observations, I hereby address their indubitably accurate assessment right here and now: The core notion in both Richard Powers novels I've read—The Echo Maker and The Overstory—condemns the human species as having evolved too far for its own good. We've come to know too much about too little, and too little about too much. In even simpler terms, because our lizard brains continue to call the shots despite what our higher intellect knows to be true, we are doomed. Powers brings the humility to us more delicately with this quote from Loren Eiseley's The Immense Journey:


As for men, those myriad little detached ponds with their own swarming corpuscular life, what were they but a way that water has of going about beyond the reach of rivers?


Be assured, Powers is a preacher. A preacher in the mold of those 18th century Boston Unitarian pulpiteers whose eloquent oratory nudged statesmen, merchants, and the general citizenry to set their sights a tad higher than base appetite and self-servitude. Morality for the sake of a civil society was the impetus then. It was good for everyone for each to be good. Not enough anymore, Powers contends. In fact it's likely way too late for good by anyone to do most anyone any good beyond the short-term illusion. As someone in the Bible must have said or at least pondered, we've pretty much sealed our fate.


[MOMENTARY INTERMISSION FOR WEEPING, EXCHANGING HUGS, BLOWING NOSES, AND RETURNING TO SEATS TO LEARN WHAT RICHARD POWERS DID WRONG IN THE ECHO MAKER]


Yes, I am most grateful to have found something to carp about in this incredibly, brilliantly overwhelming novel. It has to do with neither plot, science, philosophy, conjecture, or fluidity of thought, all of which contribute to the overall disquieting effect of The Echo Maker. My quibble is with the humble element of the writer's craft, about which I will have more to say after a brief synopsis/discussion of the astonishing features alluded to in the previous sentence. I probably shouldn't have said "brief," as I doubt I can be as concise as I, and you, most certainly would prefer. But please bear with me. I shall try, we shall see.
Powers brings his scenario of doom to us in the guise of several seemingly disparate narrative rivulets, each engaging us in its own way as it meanders through crises of purpose and identity edging incrementally closer to the others with a momentum toward confluence in a larger, more portentous story. A key to Powers's power is a storytelling gift that enables him to deliver conclusions from his boundless intellect in a palatable embrace accessible to curious muddlers like me. And Powers understands the importance of story, most likely more keenly than I, who without question would stumble pitiably off the foot bridge to understanding his wizardry without the rope of story to hold onto to steady my nerves. One of the principal characters in The Echo Maker, a cognitive neurologist, emphasizes its fundamental importance:


Consciousness works by telling a story, one that is whole, continuous, and stable. When that story breaks, consciousness rewrites it. Each revised draft claims to be the original. And so, when disease or accident interrupts us, we’re often the last to know.


The novel’s plot unfolds in the minds of three individuals besides the cognitive neurologist: a young man with brain damage who believes his sister is an imposter; the sister, who tries mightily to convince him she’s real, and Powers, constantly looking over everyone’s shoulder explaining what they see and are thinking, And there’s the irritation for me: too much ‘splaining and not enough showing. His kibitzing intrudes needlessly, tediously, and, as one professional reviewer put it, the prose lacks levity. Powers’s voice here brings to mind the brightest kid in class forever displaying his superior knowledge. The kind eager to explain in minute detail, without himself laughing, why a joke is funny. Possibly the only aspect of human cognizance Powers either doesn’t get or is blind to for its narrative value is subtlety.
Yet these shortcomings are mere nit specks in the extraordinary tapestry he has woven for us to make his point that we just might yet have a miniscule chance of getting our shit together in time to avoid flushing ourselves down the toilet of extinction. 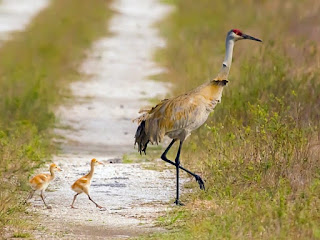 He uses as an analogy the marvelously mysterious sandhill crane, known by the very earliest Americans as “echo makers” for their unearthly cries. “All the humans revered Crane, the great orator,” Powers explains. “Where cranes gathered, their speech carried miles. The Aztecs called themselves the Crane People. One of the Anishinaabe clans was named the Cranes—Ajijak or Businassee—the Echo Makers. The Cranes were leaders, voices that called all people together. Crow and Cheyenne carved cranes’ leg bones into hollow flutes, echoing the echo maker.
“Tecumseh tried to unite the scattered nations under the banner of Crane Power,’ Powers tells us, “but the Hopi mark for the crane’s foot became the world’s peace symbol. The crane’s foot—pie de grue—became that genealogist’s mark of branching descent, pedigree.”
These long-legged, graceful dancing birds land by the hundreds of thousands every year in a Nebraska marsh on their seasonal migrations. Two former lovers of the brain-damaged man’s sister are adversaries over disposition of the wetlands that host these legendary birds. One is a preservationist, the other a developer scheming to build a tourist facility to celebrate the birds in an ironic twist destroying their habitat. 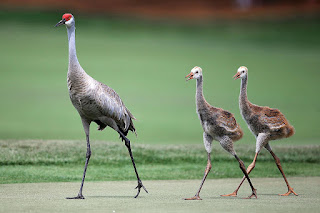 “One million species heading toward extinction,” says Daniel, one of the sister’s lovers. “We can’t be too choosy about our private paths.”
The sister muses, “Something in Daniel mourned more than the cranes. He needed humans to rise to their station: conscious and godlike, nature’s one shot at knowing and preserving itself. Instead, the one aware animal in creation had torched the place.”
One might think these details thicken the plot enough already. One would be wrong. It gets plenty thicker. Much of The Echo Maker has to do with the brain, of humans and others. My Homer Simpson wisdom ventures a guess that what Powers is doing with his dazzling exposition of cutting-edge neurological science is to show us how fractured we are, how amorphous and shifting is our sense of who we are and what we are, and how terribly wee we are in the cosmic scheme of it all.
Powers gives us science so mind-blitzing we can’t help but wonder at its veracity, yet we know from others who’ve done their Googling that it’s real. Anecdotes of people whose lives have been horribly deranged by injury or changes in their brain chemistry are enough to make me consider wearing a football helmet everywhere, even to bed.
Alright now here’s something that if it isn’t true Powers ought to be tarred and covered with crane feathers and made to get a better haircut. The following whacked me especially hard upside the head because I had exactly the described experience back in the day, although it wasn’t induced in the same way. No stream of electrodes was employed; mine came with the so-called illegal smile. Here’s the one with the juice (big words be damned):

Consider autoscopy and out-of-body experience. Neuroscientists in Geneva concluded that the events resulted from paroxysmal cerebral dysfunctions of the temporoparietal junction. A little electrical current to the proper spot in the right parietal cortex, and anyone could be made to float up to the ceiling and gaze back down on their abandoned body.


Wondering now if maybe that smile of mine (or its motivator) didn’t generate a certain mellow sort of buzz in my right parietal cortex. As it happened, I’d been watching Sam Ervin on TV gently interrogating White House Special Counsel John Dean.
In addition to the exhausting mystery of our brain, a more mundane question hovers over one of the narrative threads in The Echo Maker. Mark, the brain-damaged man, doesn’t remember how he came to flip his truck on a straightaway (albeit while driving some 80 m.p.h. at night) leaving him trapped under the three tons of steel in a marsh during the migrating sandhill crane layover. Author Powers gradually feeds us random clues, which, as all good mystery yarns should, merely awaken new questions and speculations as momentum builds to the solution, which, I daresay, is a lollapalooza.
Did I say there was no humor in The Echo Maker? I trust I didn’t put it quite like that. Something did give me a pretty good laugh, before a sudden lump in my throat made the verbal mirth sound a tad hollow. Here’s what caused the confusion:
“This is it. Carhenge,” says the brain scientist to his female companion. (They’re on a Nebraska road trip.) The huge gray stones turn into automobiles. Three dozen spray-painted junkers stood on end or draped as lintels across one another. A perfect replica. They are out of the car, walking around the standing circle. He manages a pained imitation of mirth. Here it is: the ideal memorial for the blinding skyrocket of humans, natural selection’s brief experiment with awareness. And everywhere, thousands of sparrows nest in the rusted axles.