Shutter Island is so deviously, darkly ingenious it's haunted me ever since I first read it a dozen years ago. The film by Martin Scorsese, starring Leonardo DeCaprio, was pretty spooky, too. But it's the book, not the movie, that haunts me, and maybe that's because it was the book that stole my innocence with its deviously ingenious plot, scaring me damned near into a coma. The plot of Shutter Island is so ingeniously devious it fascinated and horrified me when I read it again, last week. It has one of those endings you like to think of as an aberration, that somehow you missed something important the first time around and you’ll see it now and thank goodness it will end the way your heart would like it to. 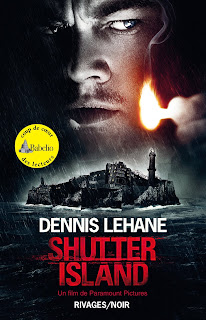 It didn’t. It wasn’t as startling as the first time, but it crawled just as deeply into my psyche and left me almost as shaken and bereft. Maybe were I to read it once a week eventually it would injure me no more, but then I’d likely end up as a mental patient myself. I’d be better off putting a sticker on my library card that says in red letters, “Please don’t let me check out Shutter Island ever again!”
The story seems simple enough. Two U.S. marshals arrive at Ashecliffe Hospital, a federal institution for the criminally insane secluded on Shutter Island, one of a string of islands off the coast of Boston. Their assignment is to help authorities there find an escaped patient. We’ve already learned on the ferry bringing them to the island that the approach of a “huge” storm is apt to complicate their mission. It does, of course, but so does an incremental accumulation of odd occurrences the marshals encounter in this ancient fortress-like hospital that had served as a Civil War POW camp. We come to realize the story’s not nearly so simple as at first we thought.
There are only sixty-six patients, who, the marshals are told, are the most dangerous in the entire prison system—essentially five-and-a-half dozen Hannibal Lecters--which the marshals understandably keep calling “prisoners” and are continually corrected by the medical staff. And the medical staff? Umm...yes. Dr. Cawley, the head shrink, lives in residence so massive and expensive the Union Army commandant who’d had it built, was relieved of his command when he submitted the construction bill. The head shrink’s chief assistant comes on like a Nazi who missed the boat to Argentina with Dr. Mengele. Here’s how he greets the marshals in the “Great Room” of the head shrink’s house:
The stranger looked up at them. “You don’t indulge in alcohol?”
Teddy looked down at the guy. A small red head perched like a cherry on top of a chunky body. There was something pervasively delicate about him, a sense Teddy got that he spent far too much time in the bathroom every morning pampering himself with talcs and scented oils.
“And you are?” Teddy said.
“My colleague,” Cawley said. “Dr. Jeremiah Naehring.”
The man blinked in acknowledgment but didn’t offer his hand, so neither did Teddy or Chuck.
“I’m curious,” Naehring said as Teddy and Chuck took the two seats that curved away from Naehring’s left side.
“That’s swell,” Teddy said.
“Why you don’t drink alcohol. Isn’t it common for men in your profession to imbibe?”
Cawley handed him his drink and Teddy stood and crossed to the bookshelves to the right of the hearth. “Common enough,” he said. “And yours?”
“Excuse me?”
“Your profession,” Teddy said. “I’ve always heard it’s overrun with boozers.”
“Not that I’ve noticed.”
“Haven’t looked too hard, then, huh?”
“I’m not sure I follow.”
“That’s, what, cold tea in your glass?”
Teddy turned from the books, watched Naehring glance at his glass, a silkworm of a smile twitching his soft mouth. “Excellent, Marshal. You possess outstanding defense mechanisms. I assume you’re quite adept at interrogation.”
Heh heh, ve haff our vays…
And then there’s young doctor Sheehan, who suspiciously left the island when the marshals arrived, leading the marshals to speculate whether Sheehan ran off with the beautiful prisoner/patient after helping her escape from her locked cell despite a gauntlet of guards she’d have to have gotten past. Sheehan’s supposedly taken a long-awaited vacation, but, alas, the phones and radios are down, presumably because of the pending storm, and cannot be reached.
We learn the marshals have their own private agenda for visiting Ashecliffe, to gather evidence for a U.S. Senator of illegal experiments reputedly being conducted on the prisoners...er, patients of the sort Nazis conducted on Jews during WWII.
Another doctor, hiding in a cave on the island, claiming to be the alleged escaped patient, describes to one of the marshals the experiments being conducted in the island’s heavily guarded lighthouse, which is supposedly being used as a sewage treatment facility. The experiments are intended to create a man that “doesn’t need sleep, doesn’t feel pain,” she tells him. “Or love. Or sympathy. A man who can’t be interrogated because his memory banks are wiped clean...they’re creating ghosts here, Marshal. Ghosts to go out into the world and do ghostly work.”
One of the marshals vanishes after the hurricane hits Shutter Island with 150 m.p.h. winds. The surviving marshal, Teddy Daniels, figures his partner’s been murdered and that he, Daniels, is next. His access to the ferry, the only way off the island, is blocked. Determined now to find out what’s going on in the lighthouse, he overpowers a guard, grabs his rifle, and storms into the tower and up the spiraling stairs. I...I can’t go on. I simply can’t tell you what happens next. I...can’t. My fingers have weakened, hands trembling, my heart...oh, mercy!