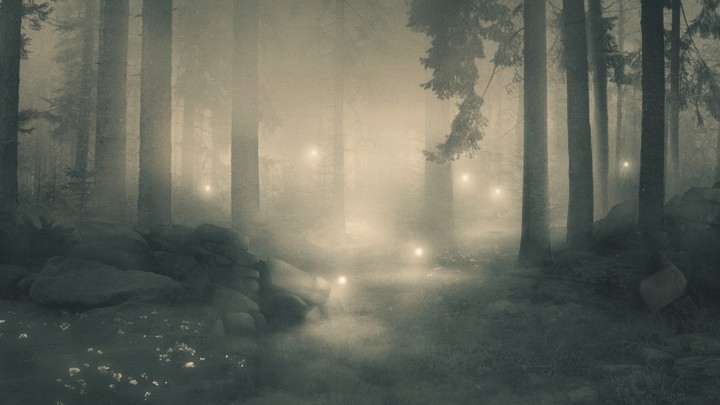 I approached The Overstory with the kind of wavering curiosity those apes in 2001: A Space Odyssey had for the mysterious, shiny black monolith, only without the momentous "Also sprach Zarathustra" lurking in the background (no doubt it could have been, by sheer random coincidence, but I don't listen to the radio anymore).
What snagged a pause during my maiden flip-through of The Atlantic's June issue was Polish artist Dawid Planeta's spooky photo illustration with a book review by Nathaniel Rich titled "Rhapsody in Green." It was the subtitle that pulled me closer: "The dark optimism of Richard Powers's climate-themed, tree-mad novel." In retrospect, the oxymoronic sense of "dark optimism" is what led me into the review itself—that and the two pull-out quotes. The first: "The Tree of Life will fall again, collapse into a stump of invertebrates, tough ground cover, and bacteria." And on the next page: "The best way to cure man's 'suicidal appetite' for growth is to hasten the inevitable suicide." 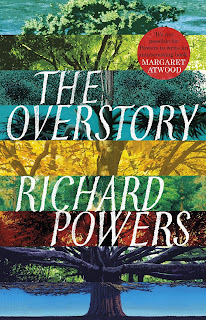 My brain gasped. Those two quotes summoned synapse connections I’d been toying with more and more frequently of late. YES!! I wanted to shout, but suppressed the urge knowing the hair stylist next door might well have jumped and spilled a bottle of rainbow dye on some elderly client's wispy white coiffure. I read the review, and the review persuaded me to consider The Overstory as my next weekly contribution to the Friday's Forgotten Books blogging group. I had to consider that a new release hardly qualified as a "forgotten book," yet I rationalized it might be one of those books that easily could slip into neglect because of its uncomfortable subject and behemoth length—502 pages, a veritable sequoia compared to the usual elms and maples of noveldom. It probably needs to become a classic among the dedicated literati before less trendy sensibilities feel compelled to crack the cover and find out what it is all a-bout (It took me decades of false starts before finally groaning into a life jacket and rowing through the entire gauntlet of esoteria, biblicalia, symbolism, and soaring poetry in the leviathan Melville reputedly had a whale of a time finding a publisher for back in the day). 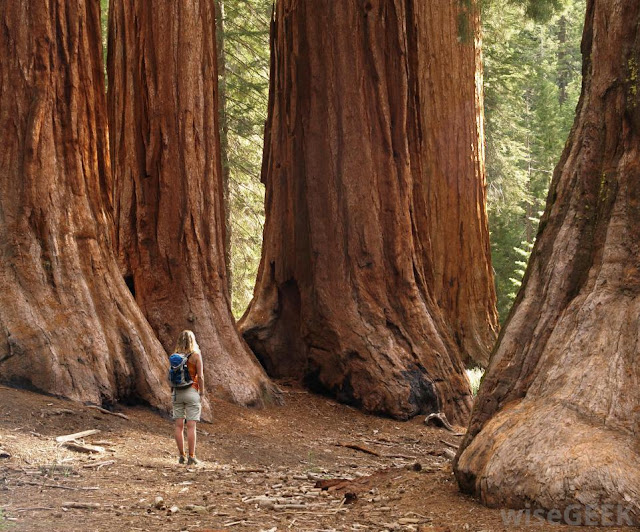 Richard Powers, whom I confess I’d not known of, was already well established in the halls of literary recognition when he gave us The Overstory. To avoid the tedium of listing his creds, I’ll simply give you a link to the bio on his website. I will say this, the guy is no one to sneeze at in so many fields I’m embarrassed at my dearth of life accomplishments by comparison. But I was ignorant of this as my finger hovered over the one-click-download button on Amazon.
I still had to reconcile the book’s oddness and newness with the Friday folks’ expectations. Our weekly assemblage is eclectic enough, offering a range of tastes that includes speculative fiction, fantasy, western, mystery, thriller, horror, noir, and the occasional nonfiction work. Again, I think the descriptions “dark optimism” and “suicidal appetite” were the deciders, and I clicked the button and watched The Overstory load onto my laptop’s Kindle app. 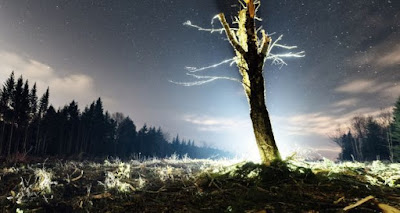 Soon into the reading I could see it touched several of the expected Friday categories. My biggest concern at first was to determine if the fiction was fantasy or based on factual knowledge, because if the latter then it most definitely exemplifies the adage “truth is stranger than fiction.”
Turns out it’s a blend, with the ambiguity set at the git-go as a mystical, poetic introduction to the first of the book’s four architectural divisions:


...in a park above a western city after dusk, the air is raining messages.
A woman sits on the ground, leaning against a pine. Its bark presses hard against her back, as hard as life. Its needles scent the air and a force hums in the heart of the wood. Her ears tune down to the lowest frequencies. The tree is saying things, in words before words…
All the ways you imagine us— bewitched mangroves up on stilts, a nutmeg’s inverted spade, gnarled baja elephant trunks, the straight-up missile of a sal— are always amputations. Your kind never sees us whole. You miss the half of it, and more. There’s always as much belowground as above.
That’s the trouble with people, their root problem. Life runs alongside them, unseen. Right here, right next. Creating the soil. Cycling water. Trading in nutrients. Making weather. Building atmosphere. Feeding and curing and sheltering more kinds of creatures than people know how to count.
A chorus of living wood sings to the woman: If your mind were only a slightly greener thing, we’d drown you in meaning.
The pine she leans against says: Listen. There’s something you need to hear.


Nice, but I’m not a fantasy buff. A little in a poem or a prologue like this, maybe, but not for a whole novel. My skepticism got serious when one of the characters, a scientist, speaks as if trees have an intelligence most of us have never dreamed of. “Trees know when we’re close by,” she said. “The chemistry of their roots and the perfumes their leaves pump out change when we’re near...When you feel good after a walk in the woods, it may be that certain species are bribing you. So many wonder drugs have come from trees, and we haven’t yet scratched the surface of the offerings. Trees have long been trying to reach us. But they speak on frequencies too low for people to hear.”
Needing to know more, to find out if this was just Powers carrying his misty dream from poetry into prose, I paused awhile and started Googling to see what real science might be saying about these things. I wasn’t the only one. Barbara Kinsolver writes in The New York Times, “The major players number more than a dozen, all invested with touching humanity, and they arrive with such convincing, fully formed résumés, it’s hard to resist Googling a couple of them to see if they’re real people. (They aren’t.) This is a gigantic fable of genuine truths held together by a connective tissue of tender exchange between fictional friends, lovers, parents and children.” And, one might add, “leaves, branches, trunks, and roots.” 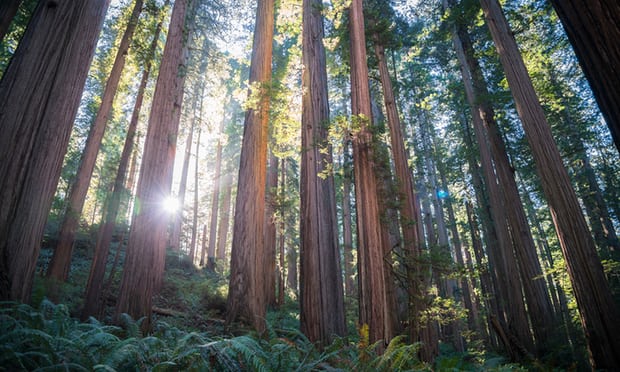 Reading deeper into the forest primeval and its human friends, my curiosity craving more facts, I even looked up what one character, who reminded me of Jeff Bridges’s "Dude" in The Big Lebowski, describes as his experience in what I learned was the controversial Stanford Prison Experiment.
And when another character, called “Maidenhair,” lives for over a year on a platform two-hundred feet high in a giant Redwood tree to save if from loggers, my Googling found Julia“Butterfly” Hill, an American forest activist who lived on such a platform in California for nearly two years.
The Overstory was not just a fascinating read for me, friends, it was an education. And as a fledgling student in this brand new field, for me, I am in no way qualified to give anyone a traditional “review” of the book. What I’m doing instead is providing links to professional reviewers in the hope they might persuade you to read The Overstory yourself, and form your own opinions on its subject matter and merits.
Here’s John Dominee in The Sewanee Review: “Breadth like this is a departure for Powers, though roving among different points of view is his usual MO. Still, he’s never been so Tolstoyan, plucking dreams from so many heads. A reviewer faces a steep challenge trying to show how things come together...
“Happy endings, in the ordinary sense, have no place in a text that renounces ordinary notions of human progress.
“...this is a novel founded on the notion of our lives as short stories.”

Eoin McNamee in The Irish Times: The Overstory might be a good book, and it might be a bad book. It might be a novel that reaches out for the unattainable and falls short of it, or a novel that overshoots its own good intentions. You can’t say it works as a piece of prose and you can’t say that it doesn’t work. You don’t know whether you should read it transfixed by the shadow of the fall of man, or throw it at the wall and run screaming into the forest...
“He dazzles and sandbags you with messianic end-of-time prose and then you’re ankle-deep in the corporate sleight of hand involved in the delivery of old-growth forests to logging interests, or looking at the legal structures required to grant actual rights to trees...
“Borges is there along with ambrosia beetles. Kant. You’re in the middle of a storm of thought which has been wrestled into the shape of a novel by a writer’s act of will. A neuron blast of high-mindedness. You get to the brink of whimsy then you’re hauled back: “Reefs bleach and wetlands dry. Things are going lost that have not yet been found.”
And, finally, Nathaniel Rich in The Atlantic, which sold me on the book. This from the second paragraph of his review:
“A former computer programmer and English major at the University of Illinois at Urbana-Champaign, Powers has written novels about the history of photography, artificial intelligence, nuclear warfare, race and miscegenation, the Holocaust, neuroscience, virtual reality, the chemical industry, and genetic engineering. It was only a matter of time before he took on the greatest existential crisis human civilization faces: the destruction of the natural conditions necessary for our own survival.”
Amen.