KILLERS OF THE FLOWER MOON: THE OSAGE MURDERS AND THE BIRTH OF THE FBI – David Grann

With a title like Killers of the Flower Moon: the Osage Murders and the Birth of the FBI, all that's left to tell, when you think about it, are the details. But, oh mercy, those details.
It's a tragically true story peppered with fiction: the lies one race of people consistently told another race. And we already know which was the lying race, considering we're looking once again at our history of "forked tongue" in the conquering and settling of the American West by a land-hungry nation of Bible-toting fortune seekers. We already know plenty of blood was spilled by both races in this struggle between appetite and survival. This book rips away the fig leaf of public innocence that concealed just how catastrophically evil the hungry ones became when they deemed Oklahoma's Osage Indians nothing more than speed bumps in the stampede to the feeding trough. 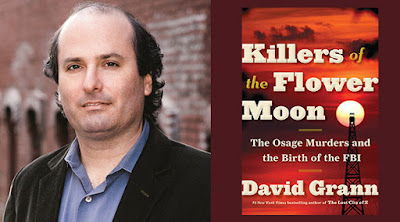