THE CASE OF THE GILDED FLY – Edmund Crispin

Robert Bruce Montgomery, aka Edmund Crispin did something seventy-four years ago that made a fool of me yesterday. I'll probably forgive him, posthumously (he died forty years ago) of course, but I suspect The Case of the Gilded Fly is the very last of his Gervase Fen mystery novels to assault my ego and my pre-frontal cortex. It most certainly was the very first. 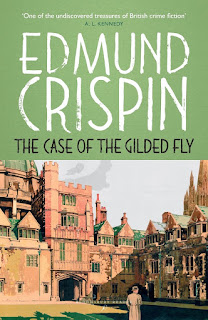 I'm listing my reasons randomly rather than by degree of irritation, and I do this with a heavy heart because two of my blogging friends think highly of the novels. That they enticed me to try them I don't hold against them, as there's no accounting for personal taste. And one of the friends did offer the caveat that she found Gilded Fly "only so-so," so I can't say I wasn't warned. That Gilded Fly is not only the first in the series but also Crispin's debut novel might explain the problem, but I fear that's only a matter of degree. I think the kind of mystery novels that are plotted like complex puzzles just don't work for me as a rule. The type I prefer rely more on the puzzles within the minds and hearts of the characters, not those of unlikely circumstance designed by the author.


Not understanding what to expect in Gilded Fly, and relying more on what the characters revealed of themselves as the story unfolded, I decided who the murderer was quite early. It seemed so obvious to me, especially as Gervase Fen, the protagonist professor/amateur detective, and Nigel, the journalist, both assured me they knew who it was, too, and made it clear they would not share with me what they knew until they had to. With this in mind, I plodded along feeling smug watching everyone else guess and argue and reveal themselves as too-likely suspects. And then Fen, whom I'd already found insufferable, pulled the rug out from under me. Pfui, as Nero Wolfe would have said. Such flummery would have wasted my time except for some witty writing—though too witty by half at times. 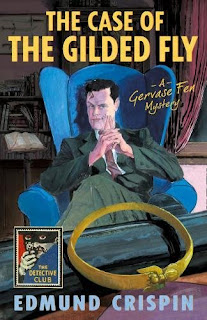 One good thing about reading a book on Kindle is that all you need do if you wish to check a word is to highlight it, and up pops the definition, complete with pronunciation, in a little box.


Yet, it irritated me that Crispin was so shamelessly showing off, violating rules of clear writing by using unnecessarily obscure words in several languages. I felt at times as if I'd stumbled into someone's doctoral seminar while looking for the men's room. I wrote in a marginal note: "He's the anti-Hemingway!" adding the exclamation mark out of pique, knowing full well exclamation marks are frowned upon these days.


If perhaps you think I'm complaining a tad much, here's the sort of thing of which I deride:


"‘Well,’ said Robert kindly, relapsing into the constatation of obvious extenuating circumstances which is employed in instructing the very unsophisticated, ‘I’d swear to the fact that she went back to that room. Naturally I can’t be certain that she took the gun away with her.’


"The Inspector dismissed this cautious and scholarly emendation with a slight frown."


And this: "‘And investigated it shall be,’ he said with something of the procrastinating valour of Achilles when required to fight against the Trojans..."


I did get a healthy laugh after a slight gasp at something Crispin did—and was reputed to have been one of the few mystery writers to do, address the readers directly. Here's what I mean:


"‘That’s all very well in a detective novel, where it has to be put in to camouflage the significant things – though I must say I think some more entertaining form of camouflage might be devised –’


"Sir Richard roused himself acerbly. ‘Really, Gervase: if there’s anything I profoundly dislike, it is the sort of detective story in which one of the characters propounds views on how detective stories should be written. It’s bad enough having a detective who reads the things – they all do –’...


" Richard lifted both hands, palms outward, in the conventional mime for despair. ‘Oh Lord!’ he said. ‘Mystification again. I know: it can’t come out till the last chapter.’"


Which is when I found out who- and howdunnit, dammit.


I gather at least one other Gervase Fen novel follows the pattern of Gilded Fly, to wit: a group of people all hate one of their members, who are then all suspected of his/her murder when it comes about fairly soon in the tale. In this case the hated victim is a brassy young narcissistic sexy actress in a...oh, hell, I'll let the novel's blurb do the work here:


It is October 1940 and, at Oxford University, the term has just begun. Robert Warner, an up-and-coming playwright known for his experimental approach, has chosen an Oxford repertory theatre for the premiere of his latest play, Metromania. Together with his cast he comes to Oxford to rehearse a week before the opening, but Warner's troupe is a motley crew of actors among whom is the beautiful but promiscuously dangerous Yseut Haskell. She causes quite a stir with her plots, intrigues and love triangles. When she is found shot dead everyone is puzzled and worried – most of the actors have had a reason to get rid of the femme fatale and few have alibis.


The police are at a loss for answers and are ready to proclaim the incident as suicide, but Gervase Fen, an Oxford don who thrives on solving mysteries, is ready to delve further."


He does, of course, and in the process batters my ego and sours my enthusiasm for puzzle mysteries perhaps forevermore. But I'll give him the last word: "'The trouble is, we’re all so damnably intelligent at Oxford,’ he said irritably. The fact of murder, which rouses an immediate instinct of self-preservation in the unsophisticated, has to penetrate to our animal souls through a thick barrier of sophisms...'"