Sure glad I read a little about the author of The Lucky Stiff before I started to pan it as the nuttiest crime novel I'd ever read (which I would have had to do gently anyway so I wouldn't hurt my blogging friend Yvette Banek's feelings, which I probably did last week with my rough handling of an infuriating puzzle mystery by Edmund Crispin, whose work Yvette also had recommended—although she responded to my irreverent words with characteristic grace). 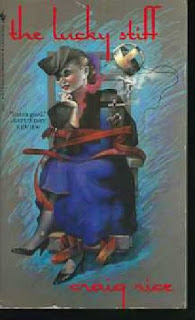 But with Lucky Stiff, doing a little Googling so I at least could appear informed, I found a description of Rice (a pseudonym of Georgiana Ann Randolph Craig) that outdid anything I might have tried to come up with on my own. This from a piece on the website Thrilling Detective:
The fact is, Craig Rice was, as a recent (and long-overdue) biography put it, "The Queen the Screwball Mystery." But even that's damning her with faint praise.
What she really was is "The Queen of the Surrealistic Crime Story." Almost everything that happens in one of her witty, wacky novels is completely off the wall. To Rice, reality was truly just a concept; a weird and wonderful playground where her imagination could romp around unfettered.

Rice twisted and distorted characters, plots, settings and events like a rubber pretzel, yet somehow she always managed to come back to this world, content at having challenged her reader's perceptions of reality.
Well, this she certainly did in her 1945 wacky, witty novel featuring four of her favorite characters: crooked-but-lovable Chicago lawyer John Joseph Malone, his two crooked-but-lovable best friends Jake Justus and his beautiful, bright and gutsy wife Helene, and honest-perpetually-grumpy-but-lovable homicide Capt. Daniel von Flanagan, who detested being a cop so much he had the “von” inserted legally into his name so he wouldn’t sound so obviously like a cop. For the record, von Flanagan had wanted to be a mortician but was pressed into uniform because “somebody at the City Hall owed one of his relatives money. Every promotion he’d had during his twenty years on the force he’d looked on as an injustice and an injury.” 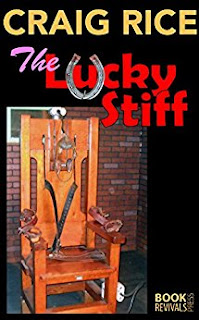 I’m starting to wonder now what was wrong with my brain to think, as I was reading this novel, how on earth I could have thinking about panning it. And I wasn’t just thinking about it. I was taking voluminous notes to prove my pan. I have several pages devoted to the number of times “chiffon” appears as the material used in most of the female characters’ dresses. I made a note when Capt. von Flanagan returns a revolver to a gangster after learning it didn’t belong to another gangster he’d arrested. He gives the revolver back to its rightful gangster owner LOADED, and almost immediately the rightful gangster owner begins firing it at von Flanagan and Malone!
It must be said that despite the novel’s obvious wackiness, it’s just serious enough—or has the appearance of being serious enough—that wouldn’t do to call it satire or intentional farce. Nor would I call it intentionally surreal. It’s pretty clear to me now that “wacky” is the perfect description—perhaps creating a genre all its own.
I hadn’t gotten into my note-taking quite yet at the beginning when the novel’s ingenue, beautiful Anna Marie, is released from Death Row about an hour before her scheduled execution when the real killer of her gangster boyfriend, Big Joe Childers, confesses as he’s dying from lead poisoning (haha) that the murder was designed to frame beautiful Anna Marie (who was wearing a “brilliantly printed chiffon afternoon dress, with a full skirt and long full sleeves”) while being led to the warden’s office instead of to the execution chamber. It seems the life-saving confession had occurred only moments before. I muttered to myself, “Yeah, right,” but didn’t make a note because I was seriously considering abandoning The Lucky Stiff without reading much further into the 300+ pages of what I was thinking was something of a stinker. Something made me hang on, though...oh, wait--I know what it was! Beautiful Anna Marie tells the warden and her lawyer she’d refuse to be released unless they went ahead and faked the execution. This was the hook. I wasn’t quite up to wacky speed yet even though it was spurring me on from my laptop screen. But when it became clear beautiful Anna Marie intended to scare the bejeebies out of the people who’d framed her, I thought Oh what the hell I’ll just read a little bit more and then move on to something else. 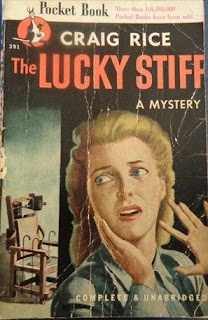 And it wasn’t long after that I started taking notes.
Here are some of my observations—quotes, actually (much wackier than any paraphrasing I could come up with:
“(Jake Justus) was, he reflected, the most fortunate man in the world. Other men might be presidents, millionaires, movie stars, heroes. He was married to Helene...The light green of her chiffon dress was like an ocean wave breaking over her white shoulders...Coffee in the sun room in the morning, Helene in her violet chiffon negligee...
“‘Helene,’ he said, ‘every time I look at you I feel as if someone had just given my heart a hot-foot.’
“Her eyes warmed. ‘Darling,’ she whispered, ‘I didn’t know you were a poet!’”
I cannot leave out this:
“Jake Justus, ex-reporter, ex-press agent, and, as he occasionally reminded himself, definitely ex-amateur detective...He was married to Helene, and he owned the Casino...Jake had won it on a bet...
“She had everything in the world to make her happy, including— especially—Jake. Just to look at his pleasant, homely, freckled face made her spine feel like a marimba in a rumba band.”
And just a few of lawyer Malone’s Yogi Berraisms. Malone, by the way, were Hollywood to revisit some of Craig Rice’s witty wacky novels, should be played—no question about it—by Danny DeVito. No question about it! On to the Yogi Berraisms:
“We’ll burn down that bridge when we come to it,” Malone said,
“With me,” Malone said, “a guess is as good as a gander.”
Malone told her, “he means, you can fool all of the people all of the time, and you can fool all of the people all of the time, but you can’t fool all of the people all of the time.”
"Remember about the early worm turning over a new leaf.”
Malone hated to see anyone murdered, even when he got a fat fee for defending the murderer. There had been times when he agreed that the victim deserved what he got, and that the world was far better off without him. But murder seemed such a—well, such a sudden way to die.
Wacky.