DOWN THE RIVER UNTO THE SEA – Walter Mosley

The people who framed NYPD Detective First Class Joe King Oliver, killing his career, his marriage, his respect for the law, his self-respect, and nearly his sanity, thought they'd gotten rid of a weed when they pulled it up in their criminal garden. But rather than toss it in the incinerator to make sure, they left it lying on the ground with its roots intact. Dangerous mistake.
"They wanted to make you die," one of the conspirators tells Oliver later, but they decided instead to destroy his highly decorated reputation by using his darker reputation to bring him down. 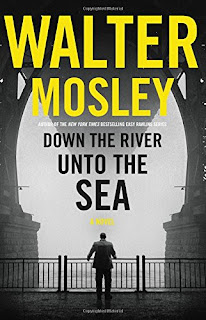 “My particular problem with women was, at one time, my desire for them,” he tells us thirteen years later. “It didn’t take but a smile and wink for me...to walk away from my duties and promises, vows and common sense, for something, or just the promise of something, that was as transient as a stiff breeze, a good beer, or a street that couldn’t maintain its population."
The setup was clever: dispatched with a warrant to arrest a woman for car theft, Oliver finds her gorgeous and willing. The carefully edited video of what happened next was shown to his wife and to the prosecutor. After three months in solitary confinement at Rikers Island the rape charges were dropped. He was released and booted from the force, a broken man without a family or a job.
“When I got off the bus at the Port Authority on Forty-Second Street I stopped and looked around, realizing how hollow the word freedom really was.”
With the help of one of his few remaining friends in the police department he obtained a P.I. license and opened King Detective Service. The unusual word “service” for a detective agency was all it took to win one customer, because, she told him, there was “duty and dignity in the use of such a word.”
His daughter, now a teenager who still lives with his remarried ex-wife, works after school as his receptionist and office assistant. It’s clear their relationship remains close. “I love my daughter,” he tells us. “If I had to spend the rest of my life in a moldy coffin buried under ten feet of concrete with only polka music to listen to, I would have done that for her.”
The “polka music” adds comic emphasis to this pledge as Oliver is a dedicated jazz lover, dropping names of famous musicians and describing their styles with more than passing knowledge. He’s also an avid reader, at one point discussing Herman Hesse with a college student on a Manhattan commuter train.
No dunce, it doesn’t take him long to put into play his suspicion from the moment of his arrest that he was set up and cut down presumably because his investigation into what appeared to be the biggest heroin smuggling operation in New York history was pushing too close to someone within the police department. Hired by a client to investigate the possible attempted murder by two policemen of a black civil rights activist, Oliver soon finds threads that seem to link that case with the one that ended his police career. His excitement is palpable. If he were Sherlock Holmes this is the moment he would say, “The game is afoot!” Here’s how he put it to us:
“I was born to be an investigator. For me it was like putting together a three-dimensional, naturalistic puzzle that in the end would be an exact representation of the real world.” Elementary, it would seem.
It’s at this point Down the River Unto the Sea veers from the gritty, harrowing, dark realism Mosley did so well with his Easy Rawlins series into a cinematic sort of adventure fantasy that requires some serious suspension of disbelief in order to stay with the story. Instead of having a childhood killer friend as his backup in dangerous situations, Oliver’s criminal sidekick is a man who lives up to the evil his mother cast upon him from the day he was born, including naming him after Satan. Now supposedly gone straight and returned to his prison-trained job as a watchmaker, he offers to help Oliver because the former cop gave him a huge break that kept him from a bank robbery conviction back in the day. Melquarth Frost might have given up robbing, torturing, murdering, and whatnot, officially, but for his old/new pal Joe Oliver, well, pretty much anything goes.
By sheer happenstance Oliver hooks up with Roger Ferris, a billionaire ex-crook octogenarian who’s sweet on Oliver’s sassy octogenarian grandma. Both are residents of a ritzy nursing home. “When you went to the can,” Ferris tells Oliver after the three enjoy a luxury breakfast at the nursing home, “your grandmother told me that you might have some trouble coming up.”
“‘You know grandmothers,’ I said. ‘Sometimes they get overprotective.’
“‘Well,’ the billionaire replied, placing a hand on my shoulder. ‘If she’s right, you just give me a call. You’ll find that there’s not much in this world that scares me He handed me a business card and gave me a nod.”
Of course that business card does come in handy when the fat nearly hits the fire--in more than a clichéd metaphoric way. Down the River Unto the Sea is considerably more rough and tumble and dark and ghastly than the Easy Rawlins stories I have read. I must say Walter Mosley’s gone quite far down the noir highway since his debut novel Devil in a Blue Dress, to which he has Joe Oliver make a wry reference when a client enters his office wearing a blue dress “reminding me of the femme fatale of one of my favorite novels.”
If I had to guess I’d give even odds we haven’t seen the last of Joe Oliver and his King Detective Service. And I’d be surprised if evil “Mel” Frost and Grandma’s big-bucks beau were not hanging around as well. They’re too interesting to abandon.
Oh, the ending of Down the River? Crazier, yet with a more realistic feel than any crime fiction I can recall. Mosley’s become a master of the genre.