Often after the end of a novel on Kindle, there's a teaser for another work by the author. I ordinarily avoid reading the teaser because I assume it will leave me hanging, and I hate that. Ordinarily, but not this time. The teaser after Devil in a Blue Dress was for Six Easy Pieces, a title promising me six stories featuring Ezekiel "Easy" Rawlins, whose P.I. career gets its start in Devil in a Blue Dress, which left me drooling for more. I took the bait, and...well, you know I ended up hooked and hanging. I immediately downloaded Six Easy Pieces to see if Easy Rawlins finds Mouse or if Mouse really is dead. 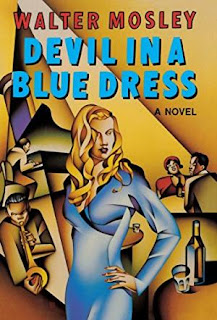 I still haven't read the end of Crimson Stain, the teaser story, to find out, although I can't imagine Walter Mosley would take Mouse away from Easy. I just can't. You see Mouse, aka Raymond Alexander, is to Easy what Hawk is to Spenser, what Bubba Rogowski is to Kenzie and Gennaro, what Joe Pike is to Elvis Cole, what Clete Purcell is to Dave Robicheaux, what...well, you catch the drift. He's Mosley's version of modern hardboiled noir's sidekick trope. Mouse is Easy's bad-guy buddy, the one-man cavalry that saves Easy's butt in the nick of time again and again and again, even though Easy tells himself he disapproves of Mouse's style—which is to kill without blinking either eye.
I don't especially like Mouse either, or Easy Rawlins for that matter. That's mainly because I'm a product of white middle-class privilege and wouldn't last five minutes in their milieu. But then I wouldn't do too well in the Boston depicted by Parker and Lehane or the L.A. of Crais or Burke's Iberia Parish. It's one of the fascinations of reading these crime novels, tasting vicarious thrills of the wild side without actually walking it. Mosley's authentic depictions and dialects come natural to him, having grown up black and poor in Los Angeles. Devil in a Blue Dress, published in 1990, was his debut novel. He's written a slew of them since, winning awards and movie contracts along the way. I'd read at least one of the Easy Rawlins mysteries in the fourteen-book series, but the title or titles didn't stick. Easy and Mouse stuck. The only Mosley title I remember having read, Always Outnumbered, Always Outgunned, is from a different series, three books featuring the character Socrates Fortlow. I remember no details or the story, only the stark, almost too-honest writing conjuring an atmosphere of desperation in a community wracked by poverty, discrimination, and crime—lots of crime.
Same as in Blue Dress, which takes place just after WWII. The novel opens in a dark little bar above a butcher shop in a black L.A. neighborhood. The bar is run by Easy's friend Joppy, an ex-pug. Easy is surprised when a white man enters: "He stopped in the doorway, filling it with his large frame, and surveyed the room with pale eyes; not a color I’d ever seen in a man’s eyes. When he looked at me I felt a thrill of fear, but that went away quickly because I was used to white people by 1948...
"The white man smiled at me, then he walked to the bar where Joppy was running a filthy rag over the marble top. They shook hands and exchanged greetings like old friends.
"The second thing that surprised me was that he made Joppy nervous. Joppy was a tough ex-heavyweight who was comfortable brawling in the ring or in the street, but he ducked his head and smiled at that white man just like a salesman whose luck had gone bad."
Turns out the white man, DeWitt Albright, offers Easy $100 to find a woman—yes, the one in the blue dress. Easy doesn't like the feel of things, but he badly needs cash. He's just been fired from his job for not showing his boss proper respect, and he has a mortgage coming due. Without some quick cash he knows he would lose his house. "I loved going home," he tells us. "Maybe it was that I was raised on a sharecropper’s farm or that I never owned anything until I bought that house, but I loved my little home... 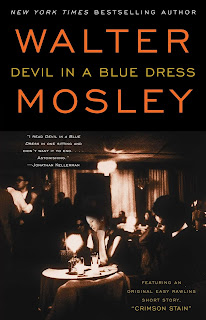 "The house itself was small. Just a living room, a bedroom, and a kitchen. The bathroom didn’t even have a shower and the backyard was no larger than a child’s rubber pool. But that house meant more to me than any woman I ever knew. I loved her and I was jealous of her and if the bank sent the county marshal to take her from me I might have come at him with a rifle rather than to give her up...
"Once I’d become a homeowner I got mail every day— and I loved it. I even loved junk mail."
Any doubt he'll take the job? Any doubt DeWitt Albright is going to do Easy wrong? Any doubt the blue-dress gal will be gorgeous, dangerous, mysterious and more? Any doubt Easy will find himself, as the stereotypical potbellied Southern sheriff would put it, "inna heapa trouble, boy?" Any doubt there'll be plenty of dead bodies, having been shot, stabbed, or beaten to a pulp? Any doubt Mouse will be responsible for various of those corpses? Any doubt Easy will find this thrill-packed experience enough to his liking that he'll become a private investigator?
At one point he narrows down his options to one: the need to find Frank Green, a bootlegging killer known as Knifehand, who Easy believed knew where to find the blue-dress babe: “During the next day I went to the bars that Frank sold hijack to and to the alley crap games that he frequented. I never brought up Frank’s name though. Frank was skitterish, like all gangsters, and if he felt that people were talking about him he got nervous; if Frank was nervous he might have killed me before I had time to make my pitch.
“It was those two days more than any other time that made me a detective.”
And along the way he learned above all else the vital importance of money. “I didn’t believe that there was justice for Negroes. I thought that there might be some justice for a black man if he had the money to grease it. Money isn’t a sure bet but it’s the closest to God that I’ve ever seen in this world.”
I started to move to the Six Easy Pieces teaser for you, but have decided to let that take care of itself. I’ll tell you this, though, that it’s the eighth book in the series, published in 2003. Easy’s a P.I. by now, but also works as a school janitorial supervisor—coincidentally just as Mosley’s father had.
Although I’ve no doubt Mouse is alive and that Easy will find him, I want to find out how it goes. I’m kinda hooked on this vicarious wild side walk.