As noted last week in my report on Devil in a Blue Dress, I took the bait and read the teaser to Six Easy Pieces after finishing the novel. The teaser offered just enough enticement for me to read the entire six-story collection—if only to find out if Easy Rawlins's criminal sidekick Mouse was really dead. And this I've done and find out I did, but, of course, among the many details I shall withhold in this report the true status of Mouse for sure will be one.
I've read only a couple of the fourteen Easy Rawlins novels, which gave me enough of an introduction to Easy's relationship with Mouse to understand the dynamic between them. These six short pieces took me much deeper, especially in the first story, Smoke, on which I am concentrating here. The blurb for the collection provides an overview peek at the time span between Devil in a Blue Dress, the series debut, and fifteen years later. The stories begin not long after Mouse was shot and presumably killed, at about the same moment, Easy tells us, that a bullet pierced JFK's skull in Dallas. The blurb:
Easy should be living a contented life, with steady work as senior head custodian of Sojourner Truth High School, and a loving family. But happiness is as elusive for Easy as smoke in shadows. Easy's the man folks seek out when they can't take their problems to anyone else. Trading favors and investigating cases of arson, murder, missing persons, and false accusations, it's hard to steer clear of trouble. Easy walks the line...
In 1948 Ezekiel "Easy" Rawlins was an unemployed combat veteran of the Battle of the Bulge. He'd just been fired from his job in an aircraft factory for being uppity with his white boss. The "favor" he traded for money in that first adventure was to find that Devil in a Blue Dress, which he did amid much violence, much of it caused by Raymond Alexander, aka Mouse, his friend since childhood. Now, fifteen years later, he's branched out as a character, resembling an amalgam of John D. MacDonald's Travis McGee and James Lee Burke's Dave Robicheaux—a struggling family man with a violent past who's employed in a regular salaried job and has a dangerous sideline helping friends with sticky problems. 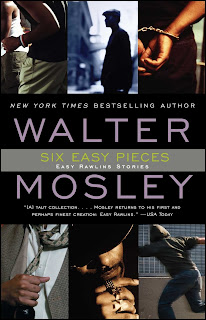 “People, black people, got all kinds of difficulties, you know that," he tells Sgt. Andre Brown, the highest ranking black cop at L.A.'s 77th Precinct. "A kid gets mixed up with the wrong crowd, a car goes missing. Calling the police, many times, just makes something bad that much worse. In that kinda situation I would come in and give a little push. Nothing criminal. Nothing bad.”
“Like an unlicensed private detective.”
“Exactly like that."
Now Easy has a sticky problem of his own. With Mouse gone, there's no one he trusts to have his back when things get nasty. When confronting a white gangster he's trying to lure to a fictitious poker game, he has to impersonate Mouse in order to make the right impression. “There’s a group of wealthy colored businessmen, from pimps to real estate agents, who wanna start a regular poker game," he tells the gangster. "'It’s gonna float down around South L.A., some places I got lined up.'
“'So? Am I invited to play?'
“'Five thousand dollars against thirty percent of the house.'
"Haas grinned. He had tiny teeth.
“'You want I should just turn it over right now? Maybe you want me to lie down on the floor and let you walk on me too.'
"Haas’s voice had become like steel. I would have been afraid, but because I was using Mouse’s name, there was no fear in me."


In fact Mouse obsesses him in this first story. The next day, while waiting in an empty garage bay for the gangster to show up, Easy reflects on why he's sticking his neck out in a way he'd decided not to do anymore since adopting two children and creating a home for them and his stewardess girlfriend.
"Raymond Alexander had been the largest part of my history. My parents were both gone before I was nine. My relatives treated me like a beast of burden, so I ran from them. I fought a war for men who called me nigger. The police stopped me on the street for the crime of walking. Raymond was the only one who respected me and cared for me and was willing to throw his lot in with mine, no matter the odds.
"I was sitting in that drafty corner because I didn’t want Mouse to be dead. Somehow by using his name I felt that I was making a tribute, even a eulogy, to his meaning in my life."
The obsession tormented his efforts to sleep the night before, between meeting the gangster and waiting to ambush him in the garage. "I might have closed my eyes sometime during the night," he tells us, "but I certainly didn’t fall asleep. I kept seeing Raymond in that alley, again and again, being shot down while saving my life. At just about the same time John F. Kennedy was assassinated, but I never mourned our slain president. The last time I saw Mouse, his lifeless body was being taken to the hospital with a blanket covering his wounds."


Like Burke's Louisiana ex-cop Robicheaux who adopted a little girl he'd rescued from a dope smuggler's crashed airplane, Easy Rawlins rescued and adopted two children—a boy, Jesus, who'd been the toddler sex slave of a white mayoral candidate, and Feather, whose grandfather had killed her mother in a parking lot. He's homeschooling Jesus, who was mute when Easy rescued him from the sex predator. "His face was the color of a medium tea," he says of Jesus. "His features were closer to the Mayans than to me. He had deeper roots than the American Constitution in our soil.
"Neither of my children were of my blood, but that didn’t make me love them less."
Six Easy Pieces is about a man called Easy. The stories themselves, though having their heartwarming moments, are not so easy on the soul.