Norman Mailer claimed certain works of art can be medicinal, that by engaging the psyche in certain ways even lethal diseases such as cancer can be defeated. He gave as an example a passage in Naked Lunch, by William S. Burroughs. The scene describes an emergency surgery being conducted in a lavatory. The surgeon, a Dr. Benway, "looks around and picks up one of those rubber vacuum cups at the end of a stick they use to unstop toilets . . . He advances on the patient . . . 'Make an incision, Doctor Limpf,' he says to his appalled assistant . . . 'I’m going to massage the heart.'
"Doctor Limpf shrugs and begins the incision. Doctor Benway washes the suction cup by swishing it around in the toilet bowl . . .
"NURSE: 'Shouldn’t it be sterilized, doctor?'
"DR. BENWAY: 'Very likely but there’s no time...'
"DR. LIMPF: 'The incision is ready, doctor.'
"Dr. Benway forces the cup into the incision and works it up and down. Blood spurts all over the doctors, the nurse and the wall . . . The cup makes a horrible sucking sound.
"NURSE: 'I think she’s gone, doctor.'
"DR. BENWAY: 'Well, it’s all in the day’s work.'”
Far as I know cancer has avoided me since I read that passage many decades ago. If Mailer was right, perhaps you are safe from the Big C now, as well. More recently, a novel by another Kentuckian, Jeffrey Scott Holland, has passages, which, following Mailer's intriguing logic, might also fortify the psyche against alien microbes and rebellious cells. Holland's Undomesticated has no toilet-plunger-open-heart-massage scenes, but some of his writing made me laugh so healingly it frightened off a bout of imminently catastrophic ennui. Holland's startling, carefree style provided the saving adrenalin fix right off the bat. This, from a brief phone chat between Paula and Stuart in chapter one:

"‘I thought you said [St. Petersburg, Fla.] was paradise,’ groaned Stuart on the other end of the connection.
"'It seemed like it at first. But after a while, you look around and realize it's basically like Ohio with palm trees. And everywhere you go, there's reclaimed water spraying on everything and it's disgusting!'
"‘What is that?’
"'Reclaimed water? It's sewage that they half-assedly purify just enough to make it okay to water lawns with. But they can't be purifying it much because it still reeks like sewage! Everyplace smells like diarrhea and everyone acts like I'm crazy when I say something about it, they're all just used to it.'"
Paula then tells Stuart she'd been in a car crash, and feared she would die listening to Billy Joel playing Beatles on her car radio:
"'I wanted to scream. I couldn't change the channel. That's what kept me from losing consciousness, because I wanted so badly to pull myself together enough to change the channel...I finally managed to lean down and hit the scan button with my shoulder. Oh my God. It was a nightmare. I didn't want that to be the last thing I heard before I died!'...
"Paula was a heroin addict, and Stuart knew exactly what she was getting at. He sat stonily silent on the other end." 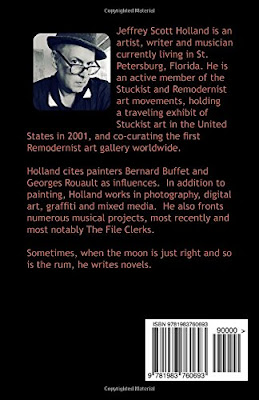 Undomesticated's narrative voice carries a deadpan tongue-in-cheek wit that follows a loosely stitched whimsical story arc involving some three dozen characters, many with only walk-on parts who nonetheless sparkle with oddball personality during their spotlight moment. While the intense individual concerns of most seem at first random and unconnected to the others—reminiscent of Burroughs's disjointed narratives he called his "cut-up style--a consistent thread begins to emerge engaging many of them in different ways. At the same time Undomesticated does the kind of kooky send-up of Florida that's made Carl Hiaasen famous as the state's king satirist. Holland, whose approach is hipper, less forced, is a serious pretender to that throne.
The book's promotional pitch claims Undomesticated represents Holland's "stab at what he terms 'The Great American Werewolf Novel' as well as a "recombinant treatise on unrestrained human behavior." It's set in St. Petersburg where its characters step "apprehensively down the roads of this realm. There's Kevin, a funeral home director, and his assistant who begin to suspect the existence of werewolves; and Tex, the county coroner who seems eager to dissuade them from their investigations. There's Lauren, who has quickly shacked up with an eccentric professor she met online; and Ellen, a painter whose life changes forever after an encounter with a mysterious woman deep in the Ocala National Forest."
The pitch leaves out Jonesy, the cop who writes poetry and seems always to get the frequent calls when jumpers are seen perched on the city's infamous Sunshine Skyway "suicide bridge." The pitch fails to mention Florida's (fictional, one presumes) dominant motorcycle gang, Wolfmen, a bunch of posers who sport silly names such as Golfclub, Weedeater, and Dinnerbell. I believe I actually peed my pants amid spasmodic laughter when a real werewolf eats one of the fearsome Wolfmen alive. (Did I really just type that?) Here's Golfclub, the Wolfmen's leader, dressing down a new member who'd suggested pimping for prostitutes: 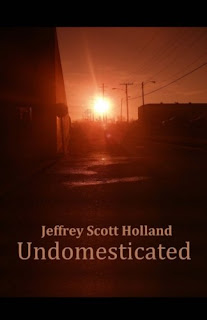 "'I'd rather you steal a prostitute's purse and max out her credit card than to lock her in a room and make her a slave. That is not the way of the Wolfmen, you got it?'
"Golfclub went through a series of physical cues and tics he'd absorbed by watching gangster shows and movies. He relaxed his stern expression, looked down for a moment, pursed his lower lip and gave a gentle nod, then cuffed Goose-Egg's face hard with that 'You're a good kid, now get out of here' sort-of slap and then a pat. He raised his head and smiled and addressed the whole group once again. 'Meeting's adjourned! Let's ride, bros!'"
Then again, maybe that's the scene where I...nevermind. Or was it this scene at Kevin's mortuary?:
“This body in particular was a mess, having been accidentally run over repeatedly by a semi-truck on Central Avenue. The family were insisting on an open-casket funeral. Kevin was good, but he was not a miracle worker, and both men dreaded having to tell the relatives that an open casket was probably not going to be desirable.”
No, dadgummit, it was the novel's final scene! Here's how it starts:
"Mrs. Nogales sat alone on the floor at a small child's colorful toy tea-set table in her living room. Lined up all around the table were various stuffed animals, dolls, and toy figurines. Each had a place setting with real cake on toy plates. She took the teapot and poured a tiny cup of tea for each of them...
"‘And now, my friends, we already sang Happy Birthday to Huevo, but now I think we should sing the Special Egg song. Okay?’
"'Okay!!' she responded to herself in a shrill garbled voice meant to represent all of the toys speaking in unison..."
Best keep a tight grip on that crown, Hiaasen!
Posted by Mathew Paust at 3:34 PM