WITHOUT A WORD – Carol Lea Benjamin

[Disclaimer: Without a Word is what's known in the mystery trade as a cozy. This as opposed to hard-boiled. I'll let you guess what differentiates these types, and while you're doing so I'll assert that I consider myself a manly man who ordinarily would rather risk hyperventilation than be seen crying over a movie scene, or while watching TV commercials or even animated cartoons with talking insects. As I understand the gender roles of Western men, we manly ones ordinarily do not read cozy mysteries, or at least we're supposed to pretend we don't. I'll say this in my defense: I did not cry at all while reading Without a Word, at least I do not recall doing so—or even struggling to keep from doing so, although I was alone and would have had no reason to pretend I wasn't moved to spasms of sentiment if in fact I had been. What I did do was enjoy the hell out of Without a Word—arrrrr—and hereby recommend it to anyone who likes an intelligent, well-charactered, cleverly-plotted mystery.]

Maybe it was the too-big sunglasses the little girl wore that kept my eyes dry despite her forlorn air and the little turtle she carried in a transparent lunch pail and the father who seemed so distant. More likely it was the unmannered voice of the private investigator describing what she saw. Right from the start, without any other reason to, I trusted her, Rachel Alexander, the Greenwhich Village PI who worked her cases accompanied always by her trusty pit bull Dashiell. 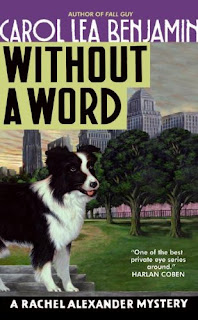 Nor did Dashiell disappoint by adding a gravelly voice to the mix, spelling his boss now and then to give us the doggie view of what seemed to be going on. No anthropomorphizing him, despite his being a beautifully trained highly intelligent pooch who succeeded where Rachel Alexander failed in displacing the alienation that kept the little girl locked in her self-imposed shell.


Here's the PI introducing herself to Madison, who, while seeming much younger, is actually twelve:


"She lifted her free hand but not to take mine. She was reaching for her sunglasses, taking hold of them, sliding them off. The eyelid over her right eye drooped badly. The other moved quickly from left to right a few times and then stopped. Standing in front of her, Madison just staring at me, I had the same experience I sometimes got before I became a private investigator, when I used to train dogs for a living. I was suddenly privy to information that seemed to come from another creature without benefit of words. Back then, and now, it always made me want to run for cover. Have a good look, Madison seemed to be telling me, at why my mother left in the first place."
And here's Dashiell:


"Dashiell got to the door first. I thought showing off might pay off big in the near future, that it might help convince this kid I had something to offer, get her to trust me a bit, so I asked Dashiell to open the door. Out of the corner of my eye, I saw Madison shoot a look at me, then quickly turn back to Dash. He took the doorknob in his mouth and twisted his head. I could hear the small click as the tongue of the unlocked door released. Then he let go of the knob, backed up one step and reared up, like a horse, hitting the door with his front paws and knocking it open. Madison was enthralled."

Here's the deal: Madison stopped speaking, to anyone, three days after her mother disappeared--five years ago. Now the girl's accused of murdering her therapist by plunging a hypodermic filled with Botox into his heart. Her father, Leon, has hired Rachel Alexander to find his missing wife in the hope if she returns Madison will break her silence and persuade investigators she didn't kill the therapist.


Rachel Alexander knows the odds of finding the mother are practically nil. The woman took the family dog walking one night, and never came back. And Leon’s not much help. Barely communicative himself, he makes his living as a photographer. He hides behind his camera rather than make eye contact during his first meeting with Rachel Alexander. He displays no affection for his daughter, and vice versa.


Spending a day at their home to try and win Madison’s trust she notices Leon doesn’t kiss his daughter goodbye when he leaves for work in the morning, and completely ignores her when he returns home. Other than her turtle, whom she’s named Emil/Emily for want of knowing its gender, the girl evidently is “pretty much on her own.”


Rachel Alexander’s so baffled at one point she finds herself walking down the street “shrugging my shoulders, talking out loud, like the rest of the crazies in New York.


“I needed to do something to get my sanity back.”


Leon hired her to find the missing mother, so she has to make the effort. At the same time, she knows the best way to clear Madison of suspicion in the murder is to find the murderer. Madison's reaction to her mother’s disappearance includes violent tantrums. The circumstantial evidence that she killed her doctor focuses on her rage over the failure of his Botox treatment to arrest the nervous tics that affect her eyelids. The first eyelid he injected overreacted to the muscle-paralyzing drug. It drooped uselessly. He’d assured her the drooping problem was only temporary, and was preparing to inject the other eyelid. Madison was his last patient of the day. No one else was in the clinic. The nurse had gone home. Supposedly an enraged Madison grabbed the needle and jammed it into the doctor’s heart. She walked home alone, something she’d been doing after her appointments, Leon said.


My questions were similar to Rachel Alexander’s as, trying to keep her sanity, she plowed ahead in what at first seemed a thoroughly daunting case. I’ll give you a few answers, now that I know them, so you won’t risk your own sanity should you decide to read this fascinating cozy mystery. Do we find out what happened to Madison’s mother? Yes. Do we find out who murdered the doctor? Yes. Do we learn the complications that led to his murder? Of course we do. Does Madison speak? 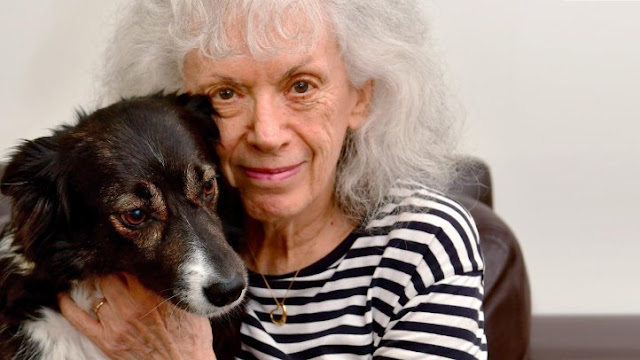 CAROL LEA BENJAMIN is a noted author about, and trainer of, dogs. Her award-winning books on dog behavior and training include Mother Knows Best: The Natural Way to Train Your Dog, Second-Hand Dog, and Dog Training in Ten Minutes. A former detective, Benjamin blends her knowledge of dogs with her real life experiences to create the Rachel Alexander Mystery series. Recently honored by the International Association of Canine Professionals with election to their Hall of Fame, she lives in Greenwich Village with her husband and three dogs, Dexter, Flash, and Peep.