A little over a year ago, moved by a Kitty Boots poem to consider braving the nearly 8,000-foot killer Andes altitude of Machu Picchu, I almost put Machu Picchu on my bucket list. But being a tad chickenhearted and a habitual procrastinator, I neglected doing so. In fact, truth be told, I had yet to do a bucket list at all. Months later a friend who'd been to Machu Picchu described the breathlessness of her experience, literally, from the arduous climb to its summit and, at the summit, her figurative gasp at the momentous vista she beheld. This New Year's morning, with no warning, Machu Picchu invaded my imagination urging that I should no longer delay starting a bucket list, if only for the sake of adding Machu Picchu to it. This I did forthwith, putting Machu Picchu right under the first item on the list: to write and sell a marketable novel that can enable me to afford a trip to Machu Picchu. 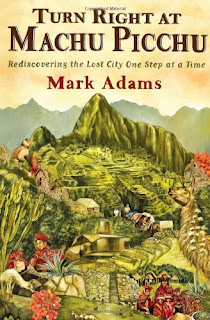 Once committed, I immediately entered the planning stage, and went to Amazon (not the Amazon, doofus!) to see what books, if any, there might be about the sixteenth-century Inca citadel. There were so many I gave up counting. Yet, understanding the need for due diligence in launching a project this challenging, I meticulously narrowed my choice to two books. Both happened to be the top two listed. I eventually downloaded the one at the very top, which I learned later was quite the better of the two. The next one down, I learned, the one I’d rejected--although written by Hiram Bingham III, the Yale professor/explorer who on July 24, 1911, first photographed Machu Picchu and who was the inspiration for the fictional character Indiana Jones--was nowhere near so useful as the one I chose: Turn Right at Machu Picchu. This became more and more obvious, as Turn Right at Machu Picchu embraced the story of Bingham’s “discovery” of what he thought was the fabled Lost City of the Incas, as well as a history of the Incas and a trudging reenactment of Bingham’s trek through Peru’s jungles and over its mountains a century later by Turn Right’s author, Mark Adams.


And if the Indiana Jones link is art imitating life, Adams’s Australian guide, John Leivers, was, in the author’s eyes, the reverse, the spitting image of another fictional character, Crocodile Dundee (which, in a double reverse, was based on another real Australian Outback guide).


As he approached forty-one, Adams found himself feeling something of a midlife crisis. In his job as a New York editor with adventure magazines, sending writers off on assignments to exotic places, he was getting an itch to have an adventure of his own. “On paper, I was an adventure expert,” he writes. “My actual boots-on-the-ground experience was somewhat limited. I had never hunted or fished, didn’t own a mountain bike and couldn’t start a fire without matches if ordered to do so at gunpoint." 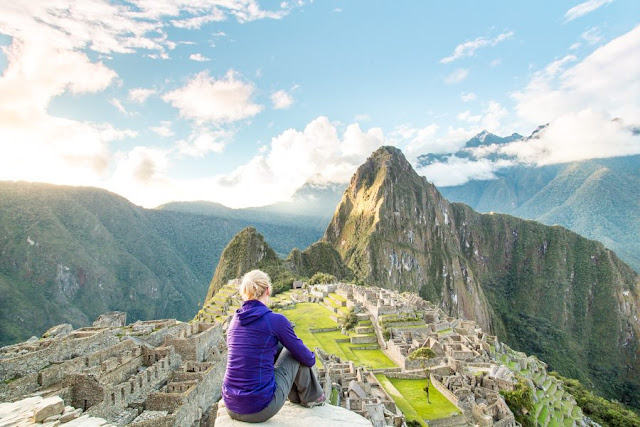 About this time, he says, articles about Hiram Bingham and Machu Picchu began turning up in the news. “As piles of Bingham-related material accumulated on my computer’s desktop, I noticed that one crucial piece of information seemed to be missing. No one could say with confidence exactly why this extraordinary complex of stone buildings had been constructed in the first place. Was it a fortress? A sun temple? A really elaborate granary? A spiritual portal to the fourth dimension, constructed by extraterrestrial stonemasons? All of these ideas had been floated, but only one person seemed to have definitive answers: Bingham.”


Adams's interest gradually grew into an obsession. Over the hundred years since Bingham’s archaeological coup, countless experts have argued over the significance of Machu Picchu. Most modern theories discounted as "ridiculous" Bingham’s claim that he’d found the Lost City.The latest hypothesis that seemed to be generally accepted, Adams says, was that of a couple of Yale scholars “who’d spent years going over the artifacts that Bingham had excavated.” The students concluded that Machu Picchu had been the country estate of an Inca emperor.


“I thought: That’s it? The lost summer home of the Incas? There had to be more to the story.”


On a sudden inspiration he called his wife at her veterinarian job. “What would you say,” he asked her, “if I told you I wanted to quit my job and go follow in the footsteps of the guy who found Machu Picchu?”


“‘I guess...’ She paused. Somewhere in the background an angry kitten meowed. ‘I guess I’d say, What took you so long?'"

Adams had gotten somewhat familiar with Peru periodically visiting his wife’s kin and friends in Lima. He’d even been to Machu Picchu, but as a typical tourist, the kind known to John Leivers and other professional guides as “martini explorers.”


“‘People used to be travelers, Mark,’ Leivers told him as they prepared to head into the jungle.’Now they’re tourists. People want hotels, cafés, the Internet. They won’t even camp!’


“‘You’re kidding!’ I said, a little too loudly. I had already checked my e-mail at an Internet café twice that morning. The last time I’d slept in a tent was in 1978, when my father brought an imitation teepee home from Sears and set it up in our backyard.”


While there are three preferred ways to get to the Machu Picchu citadel, ranging from over a week taking the Inca Trail to about an hour by train from the nearest city, Cusco, and a little longer “the back way” on foot along the tracks of a railroad spur, Adams opted for a fourth: to follow Bingham’s meandering hundred-mile trek of about a month. This meant packing supplies on mules and walking through topography that can shift from mountain frigid to tropical torrid in an instant. One simple mistake can cost a life or serious misery. Adams experienced the latter when he forgot to wear two pair of socks in his boots. His toes got so blistered he had to wrap electrical tape around them and walk with splayed feet, like a duck, to keep up with his guide and the mule team. A whip-back bush branch Leivers had chopped carelessly with his machete cut one of his eyeballs forcing him to wear an eye patch, thus limiting his three-dimensional vision, a danger in itself in such treacherous conditions.

Now that I’ve concluded my preliminary research it’s obvious to me I will be using one of the lesser three ways to reach the citadel. I’d prefer to walk the stone-paved Inca Trail, but at the very end there’s a long set of white stairs reaching a summit, a set of tall stone pillars guides call “the gringo killer.” Not that I’m afraid or anything, but...going in “the back way” might be fun! Depending on weather, though, I just might end up sheepishly riding the damned train.


Then there’s the question of uniqueness, the idea of doing something out of the ordinary. I picture myself standing alone among the geometric landscaping and puzzling buildings of the citadel itself, gazing up at Huayna Picchu, the peak to the north, or down from Machu Picchu (the mountain) in the south. But such is most likely impossible, considering Machu Picchu (citadel and namesake mountain) comprise the most popular tourist attraction in South America.


Adams says the number of annual visitors to the site had doubled in the ten years since 2000 from about four hundred thousand to more than eight hundred thousand, This, despite the price of entry tickets more than quadrupling during that time.


“A person can easily spend two hundred dollars a night on accommodations,” he says.”Rooms up at the site-adjacent Machu Picchu Sanctuary Lodge, which is like an Embassy Suites with no pool or parking lot but a great location, start at eight hundred dollars.”


With this in mind, and knowing I won’t be climbing to “the gringo killer” or probably even scuttling along the spur railroad tracks, neither shall I be a “martini explorer” at Machu Picchu. I might be able to find an affordable room in Cusco, but the train ride from there to Machu Picchu cost Adams and his teenage son some $400 when they did the earlier tourist visit.


I guess now I’d best get cracking on that novel.

[Although this is no forgotten book, nor is it likely to be forgotten for a long long time,--if ever--I nonetheless submit it for Patti Abbott’s Friday’s Forgotten Books blog list. After all, there might be someone out there who hasn’t yet considered a trip to Machu Picchu before they kick the bucket. Patti’s list can be found here.]