Present Danger was a fun read. Good story, swift pacing, believable characters, smart dialogue, authoritative, authentic feel...I...I can't think of anything I didn't like about it. Yet, I might never have downloaded it onto my Kindle app had it not been for a friend's introduction on the Friday's Forgotten Books blog feature. But it was more than that. FFB contributors review a lot of spy thrillers. And while I have nothing in particular against the genre—I read a slew of them back in the day—I guess I just reached a saturation point. They all started feeling the same. Voice, setting, plot, pacing. Predictable. Formulaic. The thrill of discovery was gone. It was the author of Present Danger who seemed fresh: Stella Rimington, former director general of MI5, Britain's internal security service. The secretive outfit John le Carré hunted spies for and made famous in his novels.


And yet, that novelty and my friend’s recommendation still weren’t enough for me to tap Amazon’s one-click-buy button. I was close, but I wanted to know something about Stella Rimington to make sure she wasn’t merely selling her name and reputation to some spy-thriller ghostwriter to crank out the same old stuff. Quickest way to find out, I figured, was to click up Wikipedia, and, oh boy, what a sales job! Even if perchance some anonymous ghost has written the nine Liz Carlyle novels for Rimington (which my keen intuition assures me isn’t true). Stella Rimington is one amazing former chief spy hunter.
[Yes, this is turning into more of a thing about Stella Rimington than about Present Danger, but don’t despair. We will get to it, presently!] 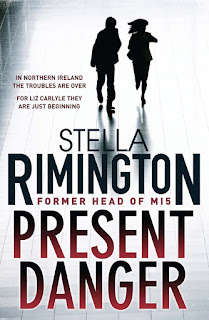 Working her way up the career ladder from a job as office aid to MI5’s representative in India, she served in all three branches of the service: counter espionage, counter subversion, and counter terrorism. Twenty-three years later she was appointed as one of two deputy directors general, and a year later to the top job. Whoever was responsible for promoting Rimington as Britain’s first female head of MI5 may not have known the expression be careful what you wish for. Rimington not only abetted a media feeding frenzy, allowing her name to be publicized—the first for an MI5 head—she swept away much of the service’s tradition of secrecy, including posing for a brochure outlining the service’s activities, no doubt producing gasps heard all the way to Ten Downing Street. And her outrageously progressive ideas did not end with her retirement from the five-year top job.
She published her memoirs, Open Secret, and began writing her Liz Carlyle thrillers. Meanwhile she spoke out against national ID cards, she described the U.S. response to 9-11 as a “huge overreaction,” and she criticized the British administration for not "recognizing that there are risks, rather than frightening people in order to be able to pass laws which restrict civil liberties, precisely one of the objects of terrorism: that we live in fear and under a police state." And she took the British literati to task when as chair of the 2011 Man Booker Prize judges, she and her fellow judges took flak for focusing on "readability" rather than literary quality. She responded in her speech at the Booker ceremony, comparing British critics to the KGB. 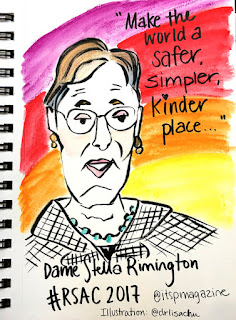 One might assume then that Present Danger’s readability is beyond reproach. To this I would most assuredly not say nyet! Like a sample of its readability? Here ya go:
“Liz looked down at Reggie’s desk where a laptop showed the satellite map of this small area of Bangor. They’d chosen it because it was outside Belfast, yet easily accessible by train and by car. As she stared down at Dufferin Avenue on the laptop screen, ten miles away Terry Fleming walked slowly down that road in the direction of the railway station. When he saw the man across the street walking in the other direction, he said in a voice barely louder than a whisper, “Brown Fox moving north. There’s no one behind him.” The miniature microphone under the lapel of his overcoat relayed this instantly to the Control Room.”
Didn’t even hafta keep your pinky in the air while reading that, didja? Well, anyway, I didn’t. As you can tell, the setting is Northern Ireland, and, I can add, thereabouts. The plot has MI5’s Liz Carlyle transferred there after her London boss’s wife dies. Everyone in the office knows there’s been “something” between Carlyle and the boss, Charles Wetherby. With the wife out of the way, there’s concern that “something” might become an open problem. Carlyle’s baffled, oddly, but resilient. Here’s her take on the turn of events:
“When her personal life had seemed especially bleak (there’d been Mark the married Guardian journalist, Piet the Dutch banker who’d dropped her, and always, the tantalizingly unavailable Charles Wetherby), she had always found one consolation. The job. As a cure for heartache it was unbeatable.”
Not to worry. This is not a romance novel, despite having some secondary romantic elements mixed in with the suspense and the thrills. Primarily, Carlyle’s assigned to a team investigating rebellious stirrings of former Irish Republican Army operatives who aren’t buying the negotiated peace that supposedly put an end to seeming endless “Troubles” in that troubled province. Part of the transition process includes a cautious power-sharing with the new Police Service of Northern Ireland, which replaced the Royal Ulster Constabulary [RUC], which had handed over intelligence work there to MI5. 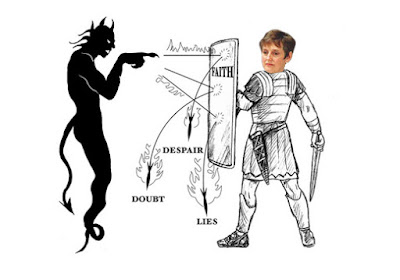 There’s a villain, of course, and his name is Seamus Piggott, a cold, ruthless rebel who, in the first chapter, has a recruit’s finger broken for careless talking in a pub. And then:
“Piggott stood up, brushing the sleeve of his jacket, as if to rid it of an unwanted piece of fluff. Without looking again at Aidan he came out from behind the desk and walked toward the open wall into the cellar. As his footsteps rang out on the concrete floor, he called back to Malone and the Spaniard, ‘Before you take him back to Belfast, break another one. We don’t want him to think that was just an accident.’”


Okay, I can see where a literary snob might scoff at the above paragraph. But here’s Rimington writing more lyrically. Whether it would satisfy the snob I cannot say, but it sure satisfied me:
“Suddenly in the distance ahead he saw the Irish Sea, rocky outcrops and slits of sandy beach, the Mourne Mountains miles to their right, heavy and dark. They drove along the coast for several miles, through a gray stone village on a wide bay, its long street practically deserted, its ice-cream hut shut up for the winter.”


Yum. This is the fifth in the Liz Carlyle series. You know I will be reading the others.
For those interested in Liz’s love life, the question of Charles and whether they… But I shan’t answer that. The question of danger, to the MI5 team—is there? Oh, plenty. More than plenty, Were I not ensconced in my recliner reading Present Danger on my laptop I’d have been perched on the edge of my seat, right foot tapping nervously. Does Piggott get his? Well, one surely would hope so, but I am loathe to give anything away. After all, Stella Rimington probably still knows how to get things done, if you catch my drift. Some secrets, even she would agree (I assume) are meant to be kept.