Terrible cover. At first glance, a cutesy black cat sandwiched between a so-so title and an unknown author, all on a plain blue-green background. Pfui, as Nero Wolfe would say. My eye wouldn't even pause on it scanning an airport kiosk's books in the hope of finding something to take my mind off the terror of hurtling through space in a supersonic tin can with suicidal religious nuts as potential fellow passengers. Fortunately I don't have to fly anymore, and I am doubly fortunate that one of my new literary advisers, Yvette Banek, sold me on the author in one of her reviews for Patti Abbott's Friday's Forgotten Books blog feature. Yvette reviewed the third book in this ten-book series, which features archaeologist Ruth Galloway, and, as I've secretly regretted not pursuing a career in archaeology ever since I saw Raiders of the Loast Ark, I walked my fingers to Amazon, scanned the series list, and one-click downloaded the one at the top. It didn't hurt that what I'd thought was a cutesy black cat on the cover is actually an ominous black owl, and, I subsequently learned a "Rare Long-Eared Owl", does in fact come into play in The Crossing Places. 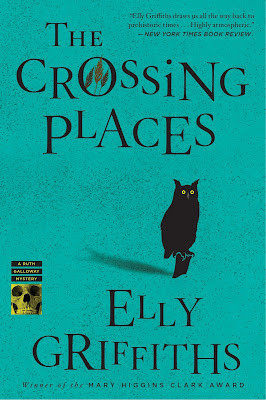 The novel opens with police asking Ruth Galloway to look at some bones found in a remote salt marsh in the remote county of Norfolk on the North Sea. Galloway's not done forensic work before, but, teaching at nearby North Norfolk University and living on the edge of the marsh, she was a natural choice for Norfolk's Chief Inspector to get a fix on the bones, which appear to be those of a child. Galloway quickly determines the bones are too old—2,000 or so years in fact--to be of police concern. But Chief Inspector Harry Nelson has told her he'd thought maybe they belonged to a little girl who'd gone missing ten years ago. Nelson tells Galloway about the weird letters he's been getting about that case displaying knowledge of archaeology. He enlists Galloway's help in deciphering the letters.
Romance, I soon began suspecting. Galloway's single and Nelson marriage is not a happy one. But both are cautious on that front—Galloway fearing she's too overweight to be attractive and Nelson reluctant to be the one to break up the family. They have two children.
Here's Galloway after first meeting Nelson at the college, about to drive to the site of the bones: "Ruth climbs in, feeling fat, as she always does in cars. She has a morbid dread of the seatbelt not fitting around her or of some invisible weight sensor setting off a shrill alarm. ‘Twelve and a half stone! Twelve and a half stone in car! Emergency! Press ejector button.’"

And now Nelson ponders his impression of Galloway: "She interests him. Like all forceful people (he calls it forceful rather than bullying), he prefers people who stand up to him, but in his job that doesn’t happen often. People either despise him or kowtow to him. Ruth had done neither. She had looked him in the face, coolly, as an equal. He thinks he’s never met anyone, any woman, quite as sure of themselves as [Dr.] Ruth Galloway. Even the way she dresses—baggy clothes, trainers—seemed to be a way of saying that she doesn’t care what anyone thinks. She’s not going to tart herself up in skirts and high heels just to please men. Not that there’s anything wrong with pleasing men, muses Nelson, kicking open the door to his office, but there’s something interesting, even refreshing, about a woman who doesn’t care whether or not she’s attractive."
Nearly forty and with no mating proxpects in sight, she's nonetheless able to laugh at herself (silently), "By now I have resigned myself to spinsterhood and godmotherhood and slowly going mad, knitting clothes for my cats out of my own hair." Yet, the chemistry with Nelson seems to be taking hold. Her inner cat sharpens its claws when she sees him with his wife: "Michelle certainly looked attractive enough, a definite prize for a man who is letting himself go a bit, a man who doesn’t look as if he has a gym membership or spends more than five pounds on a haircut." But then she zeroes in on Michelle, deciding Nelson's wife looks "like a woman who knows her own worth, as if she knows the value of her good looks and how to use them for her own purposes. She remembers seeing her laughing up at Nelson, her hand on his arm, soothing, cajoling. She looked, in short, like the sort of woman Ruth dislikes intensely."
Pfffffffff!
Oh, it's simmering, no missing that. But the boil's a ways off, at least in The Crossing Places. I would assume, though, that if these two continue working together throughout the series something will be bubbling out of the kettle before too long. Meanwhile another little girl from the same neighborhood has gone missing, and Chief Inspector Nelson's still getting spooky letters, and, of course, Ruth Galloway's on this case, as well.
The things I like about the book are, first off, the characters. Running a close second is the archaeology with its remnants of a prehistoric culture and its myths. And right on its heels comes the bleak, Norfolk salt marsh setting. Author Elly Griffiths, says The Crossing Places, her first crime novel after four books with an Italian setting, grew out of a holiday she spent in Norfolk with her 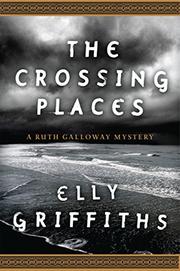 husband, had recently given up his city job to study archaeology. "We were...walking across Titchwell Marsh," she says in her webpage profile, "when Andy mentioned that prehistoric man had thought that marshland was sacred. Because it’s neither land nor sea, but something in-between, they saw it as a kind of bridge to the afterlife. Neither land nor sea, neither life nor death. As he said these words the entire plot of The Crossing Places appeared, full formed, in my head and, walking towards me out of the mist, I saw Dr. Ruth Galloway."

I found the narrative voice authentic and engaging, especially the interiors, the silent thinking and reflections. The writing is solid. I stumbled a little at first getting used to the English country idiom, but regained my footing with only a graceful skip to cover the embarrassment. Plotwise, The Crossing Places has crises and suspense galore. I had a pretty good idea quite soon who the murderer was, but there were enough red herrings to keep me a tad off balance and to hold the suspense where it belonged—several times I found myself on the verge of shouting NO! For God's sake don't!! I didn't utter a sound, though, but only for fear a neighbor might call 911.