The real director of our life is accident. So wrote the physician/philosopher/poet/revolutionary in Night Train to Lisbon. I haven't given the concept enough thought to feel comfortable offering an opinion on it, but I can say it was most likely a series of accidents that guided me to read Night Train to Lisbon, among the first being I didn't read any of the reviews, which probably would have persuaded me to pass it up. I include the film adaptation's belittling reviews, which might have nixed my borrowing the DVD from the public library. 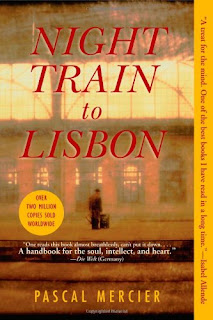 As luck would have it I'd already packed my laptop and was browsing the DVD section hoping to find The Constant Gardener to watch that night. I’d just finished posting a review of the novel on my blog and wanted to see the movie again. Alas, our library doesn’t have it (they’ve ordered it on Inter Library Loan for me, which means it could come from Kenya or Timbuktu and I’d have to pay the postage on it, but I’m gambling a nearer copy will be found, the thrill of risk being a large part of the fun, you see). Meanwhile, as our librarians were busy processing the ILL order form, I, having worked myself into a mood to watch a video that night nonetheless, returned to the DVD section in search of something that looked palatable. After clacking through dozens of plastic cases protecting the likes of Adam Sandler originals and James Patterson adaptations I came upon Night Train to Lisbon. Knowing nothing about it but sensing from the title it might reach at least a tad beyond the predictable dialogue, firefights, and demolition derbies favored by the eternal-child American movie market, and seeing the sophisticated image of Jeremy Irons on the cover, I gambled once more and took it home.


And I liked it. Liked it so much that I went on and read the book. I liked that, too, although I must admit I’m glad I watched the movie first. Starting at the novel, with its sprawling, turgid, endlessly voluble quasi-plot, I’d have been hard pressed to suggest how a film adaptation was feasible. The adaptation was magical, I see now in retrospect. Still a lot of talking (although it’s no My Dinner with Andre), but the story’s cohesive, with smart changes that give form to the novel’s hodgepodge of meanderings, internal musings and dreams—annoying, frequent dreams that arrive with little or no warning and require renewed concentration and rereads to realize they’re dreams. Perhaps the intent was poetic, but whatever it was it slows the narrative down even more than the tedious repetitions of the already slow-going philosophical assertions that are really what this novel is all about. 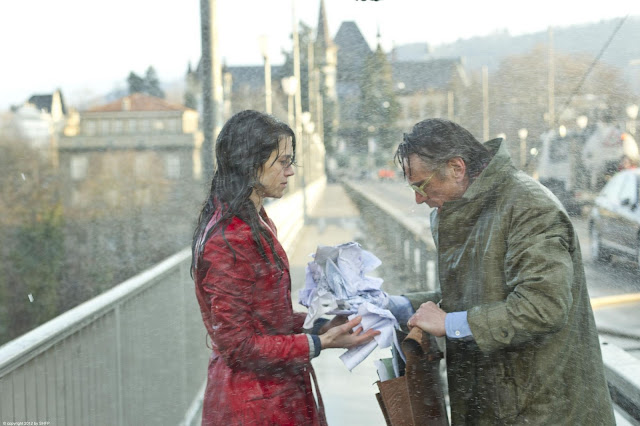 Liesl Schillinger’s merciless review in the New York Times puts it this way: the “wording is so dense and overwrought, and Barbara Harshav’s translation [from German] so ham-handed, that unpacking each sentence is like decoding a cryptic crossword in hieroglyphs.” Needlessly harsh. A tad over the top, but in keeping with the generally disparaging tone of other stateside reviews. European reviewers loved the novel, written by Swiss philosopher Peter Bieri under the pseudonym Pascal Mercier.


In the U.K.’s The Telegraph Daniel Johnson describes Night Train, “a novel of ideas that reads like a thriller: an unsentimental journey that seems to transcend time and space. Every character, every scene, is evoked with an incomparable economy and a tragic nobility redolent of the mysterious hero, whom we only ever encounter through the eyes of others.” Johnson concludes that Mercier “now takes his rightful place among our finest European novelists.” Okay, that’s a tad over the top in the other direction, yet, because of the ideas explored in the narrative, and maybe also because of the movie, I leaned more toward the positive view. 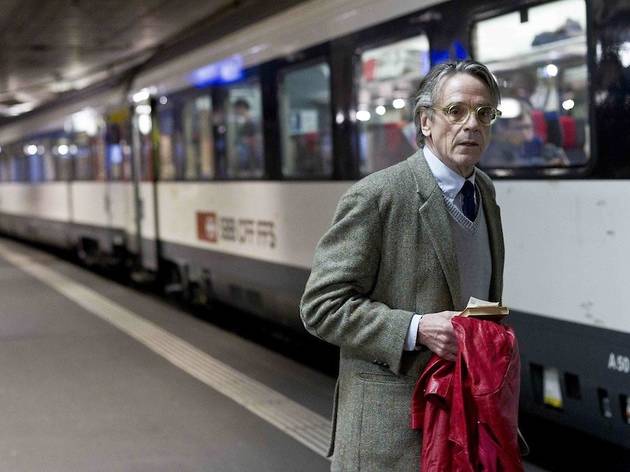 I’ll get to the plot in a jiffy, but first a couple of the ideas I found worthy of pondering. Just one, as I already gave you one at the start. How about this: “It is a mistake to believe that the crucial moments of a life when its habitual direction changes forever must be loud and shrill dramatics, washed away by fierce internal surges. This is a kitschy fairy tale started by boozing journalists, flashbulb-seeking filmmakers and authors whose minds look like tabloids. In truth, the dramatics of a life-determining experience are often unbelievably soft. It has so little akin to the bang, the flash, or the volcanic eruption that, at the moment it is made, the experience is often not even noticed. When it deploys its revolutionary effect and plunges a life into a brand-new light giving it a brand-new melody, it does that silently and in this wonderful silence resides its special nobility.”


I spent a little time pondering after I read that one, probably got up to stretch my legs, drink some water, visit the lavatory (as I believe they say somewhere in the U.K.), and maybe even take a nap. There were many others. Slowed down the reading some, but gave me chunks of savory food for thought. An Army buddy once asked me, What happens to the garbage of food for thought? I laughed, but I still wonder about it. Maybe it’s recycled in an insouciant book review.

The plot. Okay, here’s the plot (I shall rely on the film version, as it makes more sense than the novel’s despite critics' seemingly universal dismissal of it because it didn’t thrill them the way popular movies must thrill the youth of our frightening world these days. A New York Times critic—possibly himself a teenage intern—decried the lack of “action” in flashback scenes of the resistance to Portugal’s dictator, Antonio Salazar. Perhaps the “reviewer” was staring at his idiotphone and missed the scene where Salazar’s secret police smash with a hammer the hands of a pianist they’re interrogating, ho hum).


Really fairly simple, the plot. And the acting is first-rate. Jeremy Irons is perfect as stuffy, divorced, middle-aged classics teacher Raimond Gregorius, who tackles a young woman and pulls her to safety from the rail of a bridge where it appeared she was preparing to jump. The city is Bern, Switzerland, and Gregorius is walking to work on a rainy morning when this “accidental” encounter takes place. The woman follows him to the school and into his classroom. She sits awhile, then gets up, holds her finger to her lips and slips out the door, leaving her dripping coat hanging on a hook. Gregorius steps to the window and watches her walk away. Without explanation to his students he immediately grabs the woman’s coat and deserts the classroom, but when he gets outside, she’s gone.

In the pocket of her coat he finds a book titled A Goldsmith of Words, written by the Portugese physician/philosopher/poet/revolutionary whose quote I served as an hors d’oeuvre up top (first sentence, in fact). He reads some of the golden words and uses a train ticket to Lisbon (that was also in the coat pocket) to try to find the author, Amadeu Inacio de Almeida Prado. He amazes himself with the abruptness of his decision not to return to the school where he’s taught for some thirty years and is a highly regarded faculty member. Although he’d given it little thought, and felt ambivalent about the choice, he knew that for the first time in his fifty-seven years he was making a life-changing decision.


In Lisbon he soon learns Prado is long dead of an aneurysm, but Gregorius tracks down people who knew the author, including his two sisters, a couple of  unusual girlfriends, and several people who knew him in their resistance against the Salazar regime. Gregorius even finds a hint of romance with a woman who tells him, unlike his ex-wife, she does not find him boring.


Leaning on the film version, I've strayed somewhat from the book’s plot, but the conclusions are so different, I’ll leave out the film ending, though preferable to the perhaps post-post modern one in the book, so as not to spoil the more satisfying (to me) ending for those considering watching the movie first. In the book, Gregorius eventually returns to Bern, where a friend has scheduled a diagnostic appointment for him because of the severe dizzy spells he first experienced in Lisbon--the same symptoms the long dead Prado had suffered before his aneurysm burst and left him dead on a Lisbon street. We leave Gregorius as he steps into the clinic and the door closes behind him.


Here’s an encore philosophical quote from The Goldsmith of Words (you deserve it for putting up with this review to the bitter end):


“The mind is a charming arena of self-deception, woven of beautiful, soothing words that give us the illusion that we have an unerring familiarity with ourselves, a closeness of discerning that shields us from being surprised by ourselves. How boring it would be to live in such effortless self-knowledge!”