I laughed whenever I heard the whimpering sounds in the song Lawyers in Love, and I laughed in the movie Jurassic Park when the Tyrannosaurus plucks the screaming lawyer out of a privy and eats him. I might have laughed when Alfie, one of the lawyers in Single & Single was facing his execution, but I could not. That's because Alfie had gotten into my head cringing and prattling and babbling and wheedling and wetting his pants while staring down the muzzle of a Russian gangster's pistol. Almost wet my own pants as his fear clung to me for dear life. 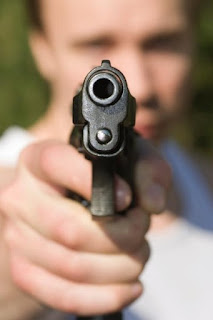 At the same time Alfie is frantically applying his sizable lawyerly skills trying to persuade the gangsters they’re making a large mistake, his senses are heightened to excruciating acuteness, noticing smells and sounds and visual details as if discovering a new universe while his mind zips around, like a honeybee in a flower bed, sampling notions, memories, regrets, hopes, promises, possibilities, and impossibilities, his powers of denial gradually leaching away from the stark, unyielding core of the fate no one ever escapes.

This first scene/chapter has the kind of leap-into-the-deep-end writing that reminded me I’d neglected le Carré far too long. My blogging buddies Sergio at Tipping My Fedora, and Tracy at Bitter Tea and Mystery are way ahead of me, and their reviews have enticed me back to the fold. And their reviews are real reviews, with knowledge of the le Carré canon lending an authority to their opinions I cannot match. Nor, as a reader whose priority is entertainment, do I care a whit for authority in trying to convey my experience to you—unless, of course I come away from the book with a bad taste, and, if so, I let you know straight up. Le Carré had me in the palm of his authorial hand with Single & Single. Savory all the way. Ordinarily when reading fiction I suspend my critical faculties—such as they are—surrendering to atmosphere and character and being pulled willy nilly through story by a narrative subtly subordinate to the experience. The author’s wizardry casts a spell that carries me over the occasional bump or odd turn with no inclination on my part to give these micro distractions a hold on my attention. Le Carré’s skills worked this magic on me with singular success in Single & Single haha.


I’ve already started Our Game (for next week), which Sergio says in his review of Single & Single is a tad better. Thus far, Our Game does feel more plot-friendly, with its single narrator and a storyline like a monster storm edging up over the treeline. Both are set in the immediate post-Cold War, with Our Game’s focus apparently more on the sputtering remnants of East/West spy intrigues and Single & Single’s on the feeding frenzy of greedy, crooked venture capitalists and international crime networks grabbing what they can of the fallen Soviet economy’s material assets. 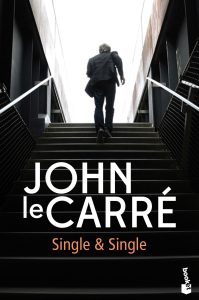 One aspect of Single & Single that had a special resonance with me is the relationship between the two principal characters—the crooked big-time lawyer Tiger Single and his honorable, somewhat bumbling son, Oliver. Le Carré acknowledges in the book’s introduction his personal father/son relationship suggested the fictional one in Single & Single, as it did also in The Perfect Spy. Not up to the bummer of doing an actual biography of his own father, he says, he nonetheless can’t resist bringing an imagined version of him into his fiction. “...it is inevitable,” he explains, “that now and then I propose a version of him, not an actual version, not a snippet of documentary, but a hypothesis, a ‘what-if.’ And the ‘what-if ‘ in Single & Single is this: What if my father, instead of being rumbled by the forces of the law—which sadly for him was regularly the case—what if, like so many of the bent businessmen around him, he had got away with his scams scot free, and become, as he always dreamed of becoming, a respected fat-cat of the West End, owner of an instant ancient pile in Buckinghamshire, president of the local football club, cricket club, giver of garden fêtes for the renewal of the church roof?


“What if, instead of merely enrolling from time to time as a law student, he had possessed enough self-discipline to study law rather than just finger it—and had thus acquired the skills that enable so many crooked lawyers to flourish in the world of finance?”


Perhaps this subliminal association brought an extra dimension to the characters, making them more empathic to me, and maybe the troubled father/son dynamic attracted my attention more closely, as well. Single & Single’s other characters are pretty much from Central Casting—Brock, the good guy representing the British Customs Office in an unspecified “interservice task force,” who recruits Oliver to help bring down the elder Single’s crooked empire; the rough-hewn Georgia-Russian patriarch; his dark-eyed poetic daughter (who captures Oliver’s heart); and her husband, the ex-KGB gangster whose face and manner gradually morph (for me) into Vladimir Putin’s. 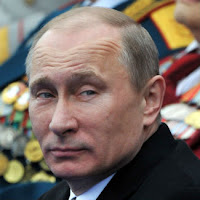 Tiger Single, while nearly a caricature of the sort of James Cagney charming/tough-guy operator, has enough real blood in him to be believable, especially as seen through the sensibility of his doting-yet-horrified son. The son, Oliver, is one of the more simpatico characters I’ve come across in any fiction genre, if only for the avocation he works so hard to perfect, entertaining children with magic shows. We find him constantly practicing his skills--sleight of hand maneuvers and making figures out of balloons—between episodes of high danger and unimaginable suspense:


“Balloons were Oliver’s sanity and Brearly was his mentor. When he could resolve nothing else in life, he could still set a box of balloons at his feet and recall Brearly on the arts of modeling...


“The balloon burst, but Oliver—who in the normal way held himself responsible for every natural or unnatural disaster—did not scold himself. There was not a magician on earth, he was assured by Brearly, who could beat bad luck with a balloon, and Oliver believed this.”


A little nuts, my lawyer dad would have said, but on another occasion he would have assured me, “everyone’s a little nuts,” albeit never including himself in that assessment.


For me, the two central characters in Our Game have proven thus far to be rather predictable. Larry, the scamp, a former British Intelligence operative who disappears, is the most interesting. But I don’t like him. Engaging though he is I wouldn’t let him near me, especially were I with a beautiful woman. Oh, hell, I despise the punk! He’s better looking than I was at his age, smarter, and can do apparently anything he wishes to do, again, better than I ever could had I tried. The other fellow, who narrates the novel and whose name I believe is—I could flip back to the Kindle app to refresh my memory, but it doesn’t matter. The guy’s too bland, too passive, too deserving of having Larry steal the beautiful musician half his age who’s living with him. But I’ve just started this one. Le Carré might well surprise me. He’s done it time and time again.