The story of David and Goliath in a kinder, gentler Old Testament translation would have young David, instead of killing Goliath with his slingshot, chasing him off the field of battle while hurling nothing more than angry words at the fearsome giant. Had that been the case, the word philistine today, instead of a curse, would be a joke. Likewise the U.S. Navy in some minds suffered similar ignominy when a peewee Chinese amphibian, firing no more than angry words on its radio, chased a fearsome guided missile cruiser three times its size from the South China Sea. 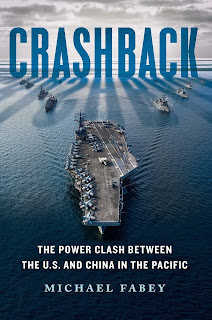 Military journalist Michael Fabey uses this Dec. 5, 2013 embarrassing incident involving the USS Cowpens to underline his wake-up call for sleeping politicians that despite China’s official posture of civility on the world stage it’s quietly conducting a crash program to build a navy that can supplant U.S. dominance in the Western Pacific. And the Chinese are not waiting until they have more than their one aircraft carrier. They’re already pushing into places long claimed by their Western Pacific neighbors, including the Philippines, Indonesia, Australia, Japan, South Korea, Thailand, Taiwan, Malaysia, and Vietnam. The most obvious and egregious Chinese incursion has been the building up a string of coral deposits into man-made islands and claiming them as Chinese territory. Admiral Harry Harris, commander of the U.S. forces in the Pacific, calls this buildup a “Great Wall of Sand,” on which the Chinese will locate forward military bases.


Fabey’s just-released book, Crashback, explores the political, economic, and military history of this region as background to his examining the implications of more recent events and policies. His own background includes decades of award-winning reporting on military and naval affairs for such publications as Defense News, Aviation Week, and Jane’s. His integrity as a journalist gained him access to the upper command levels of both the Chinese and U.S. navies as well as sailors in the enlisted ranks. Bringing sourcing and research of this caliber to Crashback gives a sobering credibility to Fabey’s conclusion that we are already at war with China, albeit what the Chinese themselves are calling a “warm war.” But it’s a war that could quickly go hot. And if it does, no one who’s read Crashback can say they were not warned.


As Fabey argues in his prologue: “It’s a war over tiny specks of land and vast reaches of sea and sky, a warm war of dangerous confrontations and small escalations, a war over military hegemony and the diplomatic and economic influence that naturally follows that hegemony. It’s a war that pits a diminished U.S. Navy, which sailed the Pacific virtually unchallenged for decades, against a burgeoning Chinese navy that is evolving with astonishing speed from a coastal defense force to a “blue-water” fleet capable of projecting power throughout the region. It’s a warm war in which China is trying to gain ownership and military control of some of the world’s most economically vital waters.


“And it is a war that the United States has been losing.”


If Crashback becomes the handbook that spurs U.S. leaders—civilian and military—into turning the situation around, Fabey says the Chinese have their own book that’s spurring them on to challenge U.S. dominance: The “widely influential 2010 book The China Dream: Great Power Thinking and Strategic Posture in the Post-American Era. It was written by a retired People’s Liberation Army colonel named Liu Mingfu, one of China’s most respected military writers and international strategists…


“In the book, Colonel Liu posits that America’s historically brief time of worldwide hegemony is passing, and that it is China’s manifest destiny to take America’s place as the leader among the world’s nations—starting in the Western Pacific. America will resist, the colonel says, the U.S. and China will initially fight a “warm war”—he uses that very phrase—for military and geopolitical hegemony in the region. There will be confrontations, shows of force, periodic crises. But in the end, the colonel says, China will prevail. And one reason it will prevail is this: Although it wants peace, China is not afraid of war. And America is.”


Fabey describes in moment-to-moment detail several recent examples of China’s thumbing its nose at international rules of the sea to confront with hostility U.S. intelligence-gathering maneuvers in international waters over which China claims territorial privilege. His flagship example is the Cowpens incident from which he’s titled the book. It began with the guided-missile cruiser steaming near China’s first and only aircraft carrier to gather electronic signals from the ship and its amphibian escorts. When spotted, the Cowpens’s radio crackles with demands from the Chinese carrier to leave the area. The Cowpens answers that what it is doing is legal. This exchange continues until two of the carrier’s amphibian escorts move toward the Cowpens in a threatening manner. The cruiser continues on its course, about ten miles away and heading toward the carrier, until one of the amphibians “suddenly turns and cuts across the Cowpens’s bow at an oblique angle, so close that it’s in the Cowpens’s ‘forward shadow zone,’ part of it disappearing from...sight under the front end of the cruiser.
It’s crunch time. Several things are in play at this point. It’s the first time China has openly challenged a U.S. warship in international waters. If the Cowpens continues ahead it will hit the amphibian, crushing it and sending it and its crew to the bottom of the sea. The Cowpens’s captain has been given conflicting orders—perhaps impossible, Catch-22 orders. As Fabey puts it: “to boldly take his ship and his crew into harm’s way—but for God’s sake, don’t let anything unpleasant happen out there.”


Fabey describes Captain Greg Gombert as “tall (six-foot-six) and lean, with blue eyes and a shock of brown hair, dressed in the navy’s new working uniform of one-piece blue coveralls. Intense, driven, supremely self-confident, he pushes his ship and his crew—and himself—hard. The product of a strict midwestern Catholic upbringing, steeped in the concepts of duty and hard work, at age forty-four Gombert is a man who has never failed at anything— and he doesn’t intend to fail in this mission.”


A Goliath of a man, perhaps, commanding most certainly a Goliath of a ship with “an astonishing amount of firepower.” It’s a Ticonderoga-class cruiser of a design “to be the most powerful surface warships ever to put to sea, under any flag, in any century.”


Let’s let Fabey describe what happens now: “Radios squawk out angry English—“ Leave the area! Leave the area!” On the decks, sailors who can see what’s going on are giving each other “Holy shit!” looks. On the bridge, the junior officers are looking desperately at Captain Gombert, who stares out at the rapidly nearing amphib, knowing he has to make a decision— and that there’s no good decision to make. In the end, he has no choice. “ALL BACK EMERGENCY FULL! BRACE! BRACE! BRACE!” In an instant the massive gears deep in the ship go from full ahead to neutral to full reverse, while the cruiser’s four twenty-thousand-horsepower-each engines are screaming to provide full power. The effect is like a jumbo jet landing on a too-short runway; the bow pushes down, the stern rises up. Throughout the ship, sailors and officers have to grab the nearest handholds to keep from being tumbled forward. The collision warning alarm bounces off metal bulkheads throughout the ship, like the flailing of a gong. It’s not at all certain that the ship will be able to stop in time.


“Finally, after it’s traveled two ship lengths, about twelve hundred feet, the Cowpens’s reversing screws generate enough counterforce to slow the cruiser’s forward momentum and bring it to a full stop, a mere one hundred yards short of the amphib. And in that moment, just before the screws start pulling the ship backward, the mighty USS Cowpens is DIW, lying dead in the water in the South China Sea.


“Old navy surface warfare sailors have a word for this kind of unusual emergency at-sea stopping maneuver. They call it a “crashback”— and for a U.S. Navy warship, and its captain, having to execute a crashback is never a good thing.” Not even when Gombert was following orders from his superiors as well as observing a law of the sea that “you do everything you can to avoid a collision, no matter who’s at fault.”


Gombert turns the Cowpens around and heads away, with one of the little amphibians in pursuit “like a yapping dog chasing a car."

The Cowpens’s—and the U.S. Navy’s—embarrassment had a lasting ripple effect Fabey sees as bringing a more realistic outlook among this country’s leadership. He’s cautiously optimistic:


“America of 2017 is not the America of 2013. And the next time the Chinese navy dangerously confronts a U.S. Navy warship on the high seas, it seems unlikely that it will be the American commander who orders the engine room to execute an ‘all back emergency full.’


“For America, and for the U.S. Navy, the era of crashbacks seems to be over.”