Trying to preserve the very British feel of Our Game for this report, the best word I can think of to describe the effect of Sergio Angelini’s Our Game review on me, even now, is daunting. (I tried to think of a way to slip a pip pip chin up in there somewhere, but a frisson of sanity arrived in time to warn me I was dangerously close to stepping a bit over the top, which, of course, one never does.)
After much procrastination then, eliminating many false starts with words less precise than daunting, I’m now taking the bold step of muddling forward with a purely American TV sportscasting analogy in mind, to wit: I shall try to serve as “color man” to Sergio’s play-by-play announcing of plot, context (historical and vis a vis the le Carré canon), and overall articulation of the Our Game literary experience. Oh yes, my friends, John le Carré’s novel is literary despite the Nyew Yawk literati’s presumed sniffs at any fiction pandering to common tastes by means of story—i.e. beginning, middle, end. To carry the aforementioned analogy a step further, Our Game’s got story. And, as one might guess, it’s a spy story. Although the title as well adheres to the sports analogy its resonance does suggest the less collegial game of international high jinks.
[I strongly suggest that anyone who’s read this far and wonders when the hell I’m going to get to the actual novel should first read Sergio Angelini’s definitive review, and then perhaps come back to this—or, perhaps read them side-by-side, or at least in close proximity. Immediately following this intrusion is an explanation directly from Our Game as to what in fact the title means in the novel’s context.] 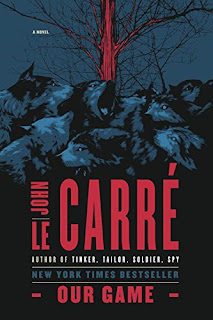 The two main characters, Tim and Larry, first meet in England’s notorious public school system—a fictitious school named Winchester—where Tim outranks Larry and, according to custom even though they are friends, has to cut Larry down to size unless he can pass an arbitrary test administered by Tim:
“‘What is the Notion for Winchester football?’ It is the easiest test I can think of in the entire school vernacular, a gift.
“‘Jew baiting,’ he replies.
“So I have no alternative but to beat him, when all he needed to say was Our Game.”
The expression never appears again. The boys move on to Oxford, and thence to British intelligence, where Tim again is Larry’s superior recruiting him as a double agent to feed misinformation to the Soviets. As Our Game opens, the Cold War essentially is over, the Soviet Union is breaking up, and Tim and Larry are recently retired. Tim takes over his parents’ winery, and is living with a girl half his age. Larry gallivants around the world, as is his nature, but now and then visits Tim, eventually stealing Tim’s girl. Larry and the girl go missing, and Tim soon learns from his former employers that Larry and his former Soviet contact have stolen 37 million British pounds from the Russian Embassy. Tim, as Larry’s former handler, is suspected as an accomplice.
I didn’t like Tim especially—at first. Found him too fussy and passive. I’d have had little sympathy for him when Larry ran off with the girlfriend were it not that by then I’d begun identifying with him, as I almost invariably do with protagonists, especially when, as Tim does, they narrate the story. But I didn’t like Larry, either. Here’s how Tim sums him up:
“How could Larry be anything except what we had made him: a directionless English middle-class revolutionary, a permanent dissident, a dabbler, a dreamer, a habitual rejecter; a ruthless, shiftless, philandering, wasted, semicreative failure, too clever not to demolish an argument, too mulish to settle for a flawed one?”
Then again, neither does Tim think much of himself:
“I began cursing.
“I cursed the goad of Englishness that had held me back and spurred me forward all my life.
“I cursed [ex-wife] Diana for stealing my childhood, and despising me while she did it.
“I remembered all my agonizing lurches for connection, the mismatches, and the return, time and again, to burning alone.
“And after I had cursed the England that had made me, I cursed the Office for being its secret seminary, and [girlfriend] Emma for luring me from my comfortable captivity.
“And then I cursed Larry for shining a lamp into the cavernous emptiness of what he called my dull rectangular mind and dragging me beyond the limits of my precious self-mastery.
“Above all I cursed myself.”
Tim, of course, now a fugitive from his former employers, must try and find Larry if only to clear his name in the theft. Reviving the spy’s tradecraft he’d left behind in his retirement, he tracks Larry to a tiny country splintered from the former Soviet Union. There he finds himself caught up in a historical civil war among the peoples divided ethnically for centuries. Speaking here is a former Soviet KGB agent, a native of one of the splinter countries:
“Ingushetia is a country under Russian occupation. And here in Moscow we are pariahs. We are neither trusted nor liked. We are the victims of the same prejudices that prevailed in tsarist times. Communism brought us nothing but the same. Now Yeltsin’s government is full of Cossacks, and the Cossacks have hated us since the dawning of the earth.”
Sergio mentions obvious overtones of Joseph Conrad—Lord Jim and Heart of Darkness—and Graham Greene’s The Quiet American in this novel. I would add T.E. Lawrence’s Seven Pillars of Wisdom. (I should think even the Nyew Yawk literati would accept these works as literature. But, then, what the hell do I know?) I agree with Sergio, though, and urge you once again to read his most excellent review of Our Game. 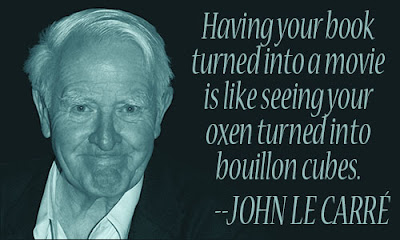