[Disclaimer: Agatha Christie fans hoping to read another fan's take on Destination Unknown are advised this report has been produced by a first-time Christie reader, and, as such, might better be read just for laughs. To find insight from a true aficionado please click HERE for Yvette Banek's splendid review. Hers is the one, in fact, that finally sold me on sticking a virgin toe into the Christie waters after a lifetime of avoiding what I had always assumed…]


I really don't know that I assumed anything. I just never felt quite able to pick up a book by Agatha Christie and give it a shot. My dad had some Christies in his little paperback bookcase, but in those prepubescent days I was inclined more to the Spillanes and Erle Stanley Gardners. I recall learning somehow, probably from my dad, that Christie liked to write, or at least to work out her ideas, while lounging in a bathtub, an image I carried henceforth—though oddly not with the slightest erotic connotations. Over the years I enjoyed film adaptations of her novels, although perhaps working against my reading her was the notion I've picked up along the way her mysteries were of the Jessica Fletcher gimmicky puzzler types, and while I tried never to miss an episode of the Murder She Wrote TV series, I'm not good myself at working out mystery puzzles. 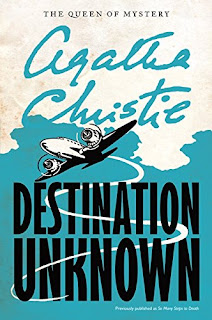 All that baggage keeping me at a distance has now been cast aside. Thanks to Yvette Banek's persistent nudges I have discovered finally the mesmerizing writer who may or may not have dreamed up her intricate plots while soaking in a bathtub, and I regret not having made the acquaintance much, much sooner.
Now then, on to her debut (for me) novel, the 1954-published Destination Unknown, truly an apt title for a reading experience launched with more than the usual curiosity. The first chapter alone removed all doubt, providing an auspicious liftoff that lulled to oblivion whatever critical faculties might have been poised to flag me down with an urgent message that time was a'wasting and I had better turn to something else before this trip thoroughly bummed me out. Yvette will give you a better idea of the plot than I can, considering she's read this novel multiple times and probably knows it by heart. I will say this much: a British nuclear physicist has gone missing. A secret service officer known only as "Mr. Jessop" believes the scientist has joined others who have disappeared of late and that they've all fled to the Soviet Union. Jessop orders his operatives to follow the scientist's wife who insists her husband has been abducted and says she's going to Morocco to get away from the publicity. Jessop believes she’s going there to meet her husband.
The plot quickly thickens when the wife's plane crashes, and she is one of only two survivors. Meanwhile another British woman—same age and physical appearance as the wife—is about to kill herself in a Paris hotel room. She’s despondent over the death of her young daughter and her husband’s abandoning her. Of course you’ve guessed by now Mr. Jessop happens upon the woman—Hilary Craven—before she can swallow the lethal dose of sleeping pills, and persuades her to impersonate the scientist’s wife and see what she can find out.
Gimmicky and barely believable for sure—hell, it’s completely unbelievable. Yet, our bathtub conjuror by now has completely persuaded me to go along for the ride despite its fantastic premise. Talk about your suspension of disbelief, mine was not only suspended it went up in smoke, perhaps in one of the two airplane crashes—one of them fake—either that or I found plausibility to be an annoying distraction from a plot that had me hopping gleefully from soap bubble to soap bubble with nary a worry one of them might pop and leave me floundering in Dame Agatha’s tepid bathwater. At some point I found myself thinking of scenes in James Hilton’s haunting fantasy Lost Horizon (even the covers are similar) and recalling the absurd, strident premise of Ayn Rand’s Atlas Shrugged. 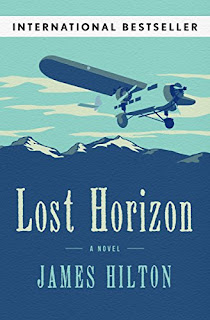 Review snippets on Wikipedia include this from The Times Literary Supplement: “While it must be admitted that the secret, when disclosed, smacks rather of The Thousand and One Nights than of modern international rivalry for scientific talents, it may surely be excused on the ground that it provides Mrs. Christie with a story-tellers holiday from the rigours of detective fiction.”
And this, from The Observer: "The thriller is not Agatha Christie's forte; it makes her go all breathless and naïve...Needs to be read indulgently in a very comfortable railway carriage. She probably had a delicious busman's holiday writing it." Maybe while trying out a new bubblebath. She also seemed to have her tongue planted firmly in a cheek, as evidenced by lines like this one: “You can’t lose a tame scientist every month or so and have no idea how they go or why they go or where!” I nodded a vigorous affirmative as I snickered.
And this exchange between Mr. Jessop and one of his operatives:
“‘Nobody’s so gullible as the scientist,’ he said. ‘All the phony mediums say so. Can’t quite see why.’
“The other smiled, a very tired smile.
“‘Oh, yes,’ he said, ‘it would be so. They think they know, you see. That’s always dangerous.’”
Some wisdom’s in there, too. And more wisdom’s here, albeit presented in The Observer’s “breathless and naive” mode via the would-be suicide Hilary Craven: “‘Escape, escape!’ That was the refrain that had hummed incessantly in her mind ever since she left England. ‘Escape. Escape.’ And now she knew— knew with a horrible, stricken coldness, that there was no escape.
“Everything was just the same here as it had been in London. She herself, Hilary Craven, was the same. It was from Hilary Craven that she was trying to escape, and Hilary Craven was Hilary Craven in Morocco just as much as she had been Hilary Craven in London. She said very softly to herself:
“‘What a fool I’ve been— what a fool I am. Why did I think that I’d feel differently if I got away from England?’”
Soon, of course, she is no longer Hilary Craven, but “Olive Betterton,” wife of the missing scientist, playing the dangerously thrilling role of Mr. Jessop’s deep-cover operative. (The real spitting image Olive Betterton died soon after her rescue from the crashed airliner Hilary Craven was supposed to be on except for the heavy fog that diverted her to an alternate flight—oh, those coincidences, gotta love ‘em! I can just about hear Dame Agatha Christie chortling in her sea of bubbles as she thought that one up.
And here I’ll bet she actually let out an unladylike guffaw, maybe while typing this little scene in Hilary’s Paris hotel. It involves a French woman lounging in a formal salon of the Hôtel St. Louis,
Her thoughts are in French, obviously, which our dear Dame neglects to translate. Here’s the best part of the scene, short and sweet. Be sure to stay for the ending. It’s priceless:
“Mademoiselle Jeanne Maricot was sitting gracefully in an upright chair looking out of the window and yawning. Mademoiselle Maricot was a brunette dyed blonde, with a plain but excitingly made-up face. She was wearing chic clothes and had no interest whatsoever in the other occupants of the room whom she dismissed contemptuously in her mind as being exactly what they were! She was contemplating an important change in her sex life and had no interest to spare for these animals of tourists!”
Mademoiselle Jeanne Maricot observes the three chattering tourists, including Hilary Craven-cum-Olive Betterton. After eavesdropping with us on their chattering interaction, she, and those of us who know French, revert back to her thoughts:
“‘Tant pis pour Pierre,’ Mademoiselle Maricot said to herself. ‘Il est vraiment insupportable! Mais le petit Jules, lui il est bien gentil. Et son père est très bien placé dans les affairs. Enfin, je me décide!’”
“And with long graceful steps Mademoiselle Maricot walked out of the small salon and out of the story.”
Guffawing, Agatha Christie did. I’ve no doubt of it. Admittedly I expected the mysterious Mademoiselle Maricot to show up later, perhaps as a surprise Interpol operative near the end, but I should have known our impeccable Dame would keep her word. 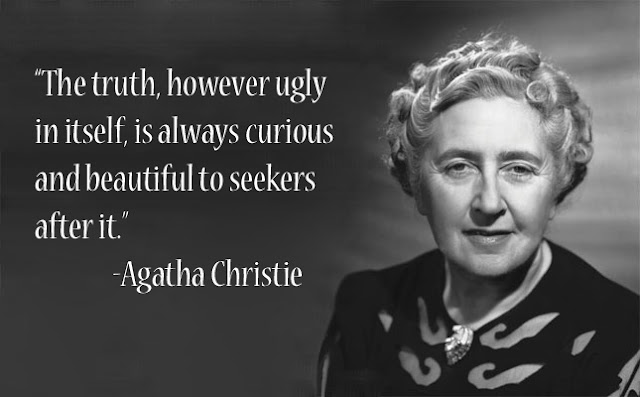