LOVE IN THE RUINS – Walker Percy

My love affair with Walker Percy has only just begun, despite my having read—at least once--everything I could find that he wrote and that's been written about him. In the early days of my acquaintance with Percy, several decades ago, I even bought a cheap park bench and sprawled on it langorously from time to time under our pecan trees, trying to feel like he looks in one or more book jacket photos and in many Walker Percy magazine features. I probably should not have disclosed this pathetic fact, and surely wouldn't have were it not my intention to impress upon you how deep and lasting an impact Percy has made on my psyche. 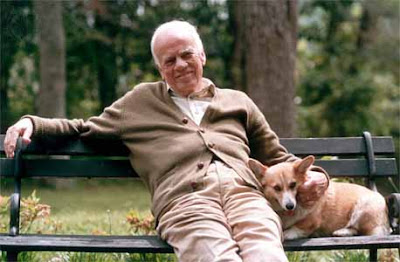 I believe I read his first novel, The Moviegoer, first. If so, I have no recollection of whatever or whoever prompted me to read it. I've since read it twice more, each time finding so much more in the writing it was as if I was reading it again for the first time. Some years went by after that actual first reading before I read another of his novels, this time recommended by a friend. It was either The Last Gentleman or Love in the Ruins. This was years ago. Of all the other Percy works besides Moviegoer, Ruins is the only one I've reread. As with my rereads of Moviegoer, while I found Ruins familiar the second time around, I saw much I'd had no inkling of before. 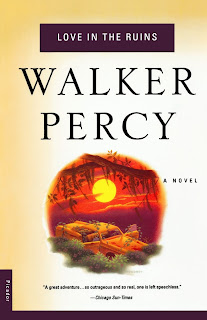 Percy’s novels are layered with meanings that start at the top level with a male narrator and his immediate crisis. Before long, pursuing a resolution to his crisis, he takes us down the elevator through levels of social malaise and its philosophical/Christian interpretations. Percy, who had joined the Catholic Church, considered himself a “wayfaring” Christian, which was a mix of philosophy and faith. I came to understand this more by reading about him than reading his novels, but with the rereads thus far it’s obvious his wayfaring search for a satisfying life based on belief in the New Testament is very much a part of the fabric of both novels. In Ruins, which has an added satiric layer, there’s even an obvious Devil character. Percy balances absurdity with a commonplace surface feel of moving through perilous terrain with signs everywhere pointing to darkness ahead. The opening scene of Ruins kicks things off and sets the tone:


Now in these dread latter days of the old violent beloved U.S.A. and of the Christ-forgetting Christ-haunted death-dealing Western world I came to myself in a grove of young pines and the question came to me: has it happened at last?


Two more hours should tell the story. One way or the other. Either I am right and a catastrophe will occur, or it won’t and I’m crazy. In either case the outlook is not so good.


Here I sit, in any case, against a young pine, broken out in hives and waiting for the end of the world. Safe here for the moment though, flanks protected by a rise of ground on the left and an approach ramp on the right. The carbine lies across my lap.


Just below the cloverleaf, in the ruined motel, the three girls are waiting for me.


Undoubtedly something is about to happen.


Or is it that something has stopped happening?


The psychiatrist narrator is a “collateral” descendant of his apparently coincidental namesake, Sir (Saint) Thomas More, the 16th century lord high chancellor of England executed by order of Henry VIII for refusing to acknowledge Henry as supreme head of the Church of England. At his execution, More reportedly said, "I die the King's good servant, and God's first." Dr. Tom More, immobilized by Satan incarnate Art Immelman, calls upon his ancestor to banish Immelman as he approaches More’s secretary Ellen to make off with her: “’Don’t touch her!’ I cry, but I can’t seem to move. I close my eyes. Sir Thomas More, kinsman, saint, best dearest merriest of Englishmen, pray for us and drive this son of a bitch hence. I open my eyes. 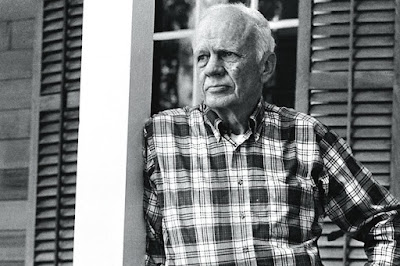 “Art is turning slowly away, wheeling in slow motion, a dazed hurt look through the eyes as if he had been struck across the face.”


Immelman’s the cause of the catastrophe More awaits in the beginning of Love in the Ruins. Having appeared mysteriously and affixed himself seemingly to More’s every move, he has subverted More’s invention—a brain-scanning diagnostic tool—by affixing a treatment element he’s using to arouse people’s basest desires. More fears Immelman’s misuse of the tool over the deep salt deposits under the local golf course will release a heavy sodium cloud from which “an unprecedented fallout of noxious particles will settle hereabouts and perhaps in other places as well.


“The effects of the evil particles are psychic rather than physical,” More tells us. “They do not burn the skin and rot the marrow; rather do they inflame and worsen the secret ills of the spirit and rive the very self from itself. If a man is already prone to anger, he’ll go mad with rage. If he lives affrighted, he will quake with terror. If he’s already abstracted from himself, he’ll be sundered from himself and roam the world like Ishmael.”

As to More’s apocalyptic fear, I can tell you that, yes, all hell does break loose at one point in the complicated, politically, religiously, and socially fragmented community where the story is set. Looking back five years later, these days would be referred to as The Trouble. All is not well five years later, though, and we leave off with Dr. More married to one of the “three girls” holed up in the ruined motel, living contentedly and working to enable his diagnostic tool for curing spiritual ills instead of turning people into beasts.


Sort of a happy ending, it would seem, at least for More, but with Percy’s obligatory ominous overtones for the rest of us.