Had I read Anthony Hope back in the day—in fact as recently as a year ago—I'm obliged to hope I'd have been a tad more careful putting my heart in harm's way. Much wisdom Hope had in ways of the heart. So wise he'd have smiled knowingly at my hope and cited a line from one of his stories, The Virtuous Hypocrites: "the human heart is very wicked." 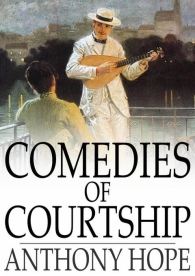 The story is part of a collection, Comedies of Courtship, which, had I read them several decades ago, should have given me long pause before placing myself in the position where pronouncing those obligatory words "I do" was the only honorable course. Futile pause, Hope would have counseled, with a nod at another line from Virtuous Hypocrites, only delaying the inevitable. The line, "At first sight they had as little reason for being unhappy as it is possible to have in a world half full of sorrow." Oh, yes. And as to the inevitable crash, yet another line offers a pummeled spirit this modicum of relief: "The only comfort was that shallow natures felt these sorrows less."
Fortunately, Hope knows when to relent, giving us lines like this that bust even the somberest of guts: "Oh, Mr. Ellerton, what shall we do? They're still in love with us!" This from the long awaited reveal scene in Virtuous Hypocrites, a clever minuet of a farce in which the lovers of one couple become a couple themselves quite incidentally, with signals delayed—fortuitously, perhaps, as it it turns out--by lost and misread letters.
The viability of Hope's lovers and wooers, and their beloved and wooed depends largely on their physical appearance, social standing, and wealth. The plain and poor need not apply. In only one story—The Lady of the Pool--did two characters come up short in the physical category. A nubile woman was described vaguely as "heavy", and the filthy rich wooer of the eponymous beautiful woman was ridiculed as froglike—short, squat and cursed with bulging eyes. Otherwise the women, if they're described at all, are simply "beautiful" while the men are tall, broad-shouldered, curly haired and blue-eyed. These were Victorian times, when literature danced delicately around anything that might even have hinted at female physicality beyond blushing faces or sparkling eyes. Nonetheless, with Hope's crafty wit and evident understanding of the human beast, we are permitted rich reading between the lines. 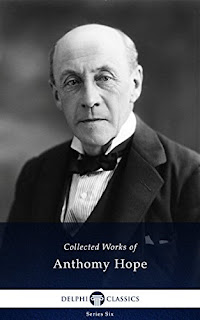 When romantic conniving is involved, women are the slyest, and therefore the most apt to succeed. Trix Queenborough, the object of male desire in The Curate of Poltons, is by far the foxiest of them all. She has, Hope writes, “a bowing acquaintance with her conscience.”
In a conversation with the narrator, a friend but not a suitor, Trix asks what's on his mind:
"I was thinking-," said I, "which I would rather be--the man you will marry, or the man you would like."
"How dare you? It's not true,” she exclaims. “Oh, Mr. Wynne, indeed it's not true!"
But of course Mr. Wynne has hit the nail squarely upon its head.
In A Three-Volume Novel, a seemingly modest but otherwise eminently eligible young man, confronted with the usual feminine wiles, is the one who gets to pick, and, in my opinion, picks the right one.
The eponymous young man in The Philosopher in the Apple Orchard, shares his methodical wisdom with the story's ingenue, advising her to pick one of the two hypothetical bachelors she's eyeing for marriage. Going against her own desire, she takes his advice. In my opinion, there really was no choice.

Dulcissima, a strong, righteous woman, defies The Decree of Duke Deodonato, resisting the duke's order that she marry the hideous Fusbius, the first man to propose to her, as per the decree.
"This day in your Duchy women are slaves, and men their masters by your will," she tells Trump...er, I mean the duke.
"It is the order of nature," said Deodonato.
"It is not my pleasure," said the damsel.
Then Deodonato laid his hand on his silver bell, for he was very angry. "Fusbius waits without," said he.
"I will wed him and kill him," cried Dulcissima.
Happy ending? Well...of course!