I chose these two mediocre novels by James Hilton in the warm glow of the first two of his novels I read—Lost Horizon and Random Harvest. Had it been Goodbye, Mr. Chips and Was it Murder? first, and were Lost Horizon not so famous, I likely would as yet be unread of anything by James Hilton. I'm glad it worked out this way, although I do not have much enthusiasm for writing about the two lesser books. I find no pleasure in panning books I should have exercised more self-discipline than to read at all. In fact it embarrasses me. So I will take a tip from British custom and try muddling on through with a stiff upper lip, whatever the hell that is. 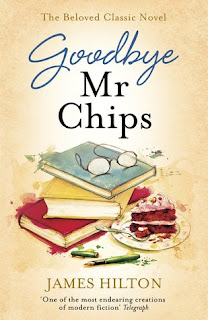 I could say the very narrow nostriled pip pip Britishness of the characters irritated me into a bad mood, which certainly is part of the problem--I'll give some examples, especially from Murder. But the more I've thought about it the more I've come to believe it was story that made the difference.
In Chips, which Hilton wrote in a week and is only 25 pages, we follow the mediocre career of a teacher named Chipping in a mediocre private school (which the Brits call “public”). Chipping, called “Chips” by everyone, is an introverted fellow whose plodding determination and a bit of good luck eventually endear him as a personal institution. In overdoing Chips's habit of breaking up his speech with hmphs, Hilton succeeded in annoying me to the point I would cringe whenever poor Chips started talking. I might even have shouted at least once, “OKAY, WE GET IT, HMPH!!” Chips nonetheless caught the sentimental eye of Hollywood, which turned out several successful adaptations, one of them a musical with Peter O'Toole and Petula Clark. 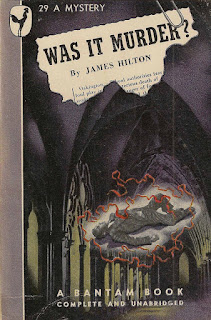 Two years earlier one of Hilton's first novels—and his only detective novel--then titled Murder at School, was published under a pseudonym. The title was later changed to Was it Murder?, and even later, back and forth between the two titles. I learned all of this from an excellent review posted five years ago by my friend Sergio on his blog Tipping My Fedora. Safe to say that had I seen his review before reading Was it Murder?, I would have passed on the novel. Sergio gave it only 2.5 tips of his hat out of a possible 5, albeit he's tough to please—I cannot recall any of his reviews I've seen receiving 5 tips.
As I've frequently confessed, my tendency to identify with protagonists compromises my critical faculties, meaning I probably shouldn't be reviewing any fiction whatsoever. And I don't, really. I write about what I like or don't like, based solely on the effect a novel or story has on me. I have a vague familiarity with such terms as “Golden Age” and “modern” and “post modern” and perhaps “post post modern,” if such exists, but those distinctions are out of my purview. Were I a British public school “old boy”, though, such terminology would bloody well be de rigueur, don'tcha know.
As to my identifying with the main characters, Chips made me queasy, his growing old in passive mediocrity. I have enough stubborn Norwegian DNA in me to resist so meek a surrender. With Colin Revell, the amateur detective in Murder, I squirmed with embarrassment. This, from the get-go:
A mystery always attracted him. Anything attracted him, in fact, that brought with it the possibility of being drawn into some new vortex of interest. His soul yearned with Byronic intensity for something to happen to it. He was almost twenty-eight, and so far he seemed to have done nothing in life except win the Newdigate, give a terrifying study of the Jew in the O.U.D.S. production of The Merchant of Venice, publish a novel (of course he had done that), and rake in an unexpected tenner for inventing the last line of a limerick about somebody’s chewing-gum.
Of course, he had published a novel...grrrr... I'd hoped, when I read that paragraph, that Murder might turn out to be satiric, and that the fop “detective” would entertain me in the manner of, say, Peter Sellers in his Pink Panther Inspector Clouseau disguise. Alas, 'twas not to be, despite the occasional glimmer of what may have been Hilton's random attempts at drollery. Apparently wit was absent from among the tools in his skill set—unless, of course, his humor was so precisely British it sailed untouched over my artless American head. Then there's this, which I include especially as a caveat for my two faithful female readers: “A man might have done it, if ever a man had had her type of genius to begin with. But her nerve was only a woman’s.” That's a Scotland Yard detective speaking, Yvette and Tracy, and he's no Fat Ollie Weeks parody of Archie Bunker, at least not in this brief role. It's a straight, dispassionate line, provoking nary an arched eyebrow from Revell or the conversation's other Scotland Yard detective. Good ol' boys all three, plus their literary creator.
Then again, Murder was written in 1931, when females were deemed too delicate to open screw-top jars when a handy male was present.
As we have arrived at the place where I'm to give you some idea of the plot, I'm going to skimp, leaving you to read Sergio's account, right here. I shall say mostly what I didn't like about it: Too simple, for me, and unnecessarily complicated in Revell's unlikable mind. He spends may too much time agonizing over theories and doing precious little detecting. Scotland Yard's entry to the case adds some ballast, but as we're viewing things from Revell's arrogantly callow, i.e. aggressively gullible, perspective, the real cops seem more adjunctive than in charge. There are too few suspects. Even I, who's easily stumped by mysteries even the least Sherlockian of readers can solve, had this one figured out while Revell's theories were still still roiling about in his Walter Mitty imagination. Had he been Walter Mitty I might now be stifling laughter whilst gushing my enthusiasm on the page.
If you're wondering how a fop like Revell got into a murder investigation, I can give you a clue: The school's headmaster invited him to look into the strange death of a student. His name had come up as an alumnus of the boy's school with a reputation at Oxford for solving mysteries. The only mystery Revell mentions involved recovering a stolen document from the college library. As to what else our boy detective might have been up to during his school days, I leave you with this little ditty he's just finished writing, which kicks off this pretentious, muddled excuse for a novel:

Pilate might well have added: “What is youth?”—
And so the modern father too may wonder,
Faintly remembering his own, forsooth,
But feeling it would be an awful blunder
To tell his sons a tenth part of the truth
About the sex-temptations he came under.
Therefore, in England now, on every hand,
This proper study of mankind is banned.

My gratitude to you for having read this far. Please accept my sincere and heartfelt apology.