THE PRISONER OF ZENDA and RUPERT OF HENTZAU – Anthony Hope

I knew nothing of Anthony Hope or The Prisoner of Zenda, other than a vague familiarity with the intriguingly classic-sounding title, when I decided to download the novel's Kindle version some months ago. The decision was easy, I see now: free download. I've no recollection how I came to it, but assume the book was mentioned in something I was reading. It's entirely possible my literary advisor, Fictionaut's Kitty Boots, led me to Zenda indirectly (her tastes being more contemporary) via something she'd recommended. Then again the enticement might well have happened before Ms. Boots took me on as an advisee, about a year ago (zounds, how fleet doth time canst be!). For now, nay, its wherefore must of my own remiss remain a mystery, although I hereby pledge upon my honor as a descendant of Norse and European common blood to update this report with an insertion of the solution, should one emerge from memory--no matter the time elapsed--following publication. I offer this pledge in homage to the most honorable fictional faux king of the fictional Ruritania and his most honorable fictional cohorts. 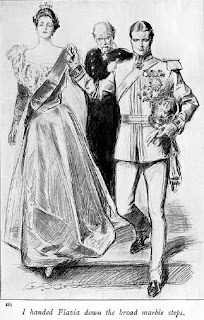 Lord, what was I thinking, I muttered under my breath, when, after selecting Zenda from from my Kindle library following a delicious meal of two Nordic police mysteries by the incomparable (and barely pronounceable) Arnaldur Indridason, I began reading the 1894 prose of the delightfully pronounceable Anthony Hope:
"I wonder when in the world you're going to do anything, Rudolf?" said my brother's wife.
"My dear Rose," I answered, laying down my egg-spoon, "why in the world should I do anything? My position is a comfortable one. I have an income nearly sufficient for my wants (no one's income is ever quite sufficient, you know), I enjoy an enviable social position: I am brother to Lord Burlesdon, and brother-in-law to that charming lady, his countess. Behold, it is enough!"
Behold, indeed. It was to yawn when I first beheld those lines, and I returned it to the library. Then, a day or two later, feeling the pressure of an approaching Friday's Forgotten Books deadline and having failed to find anything else that tickled my fancy among my Kindles-in-waiting, I remembered how short Zenda was. Short! 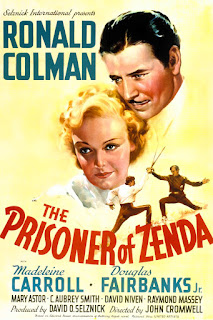 Okay, I, widely grinning, almost said aloud, I can put up with the beholds, the egg-spoons and the musings of some indolent English aristocratic fop for 137 pages. This I can do. And I did. And the damned book was so much fun—a hoot, in fact--I downloaded its sequel, Rupert of Hentzau (also free) and read that, as well! Another hoot—I nearly bemoaned the lack of a third, despite knowing deep within my commoner's breast a third Zenda must would strain with mighty fervor to keep up with the first two, and still fall woefully short of hootitude, reprising for me the saga's inaugural yawn (and carrying us dangerously near that looming deadline). Well, okay, there is a prequel, The Heart of Princess Osra, set a century before, but I'm discounting it for various reasons, the main one being I discovered it too late.
So for now, two it must be. And here I should note that to describe these novels merely with the word hoot is to do them an injustice. Romp should be part of the descriptive mix, as well as suspenseful and thrilling and clever and smart (those last two are not necessarily synonymous). The hoot part comes with engaging a narrative draped in Victorian decorum and ethos from the vantage of a world obsessed with a typoed Tweet while slinking mindlessly toward climatological calamity. 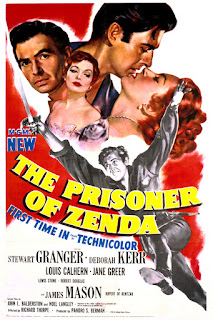 The world of Zenda is one where we are lured to accept that love unto death can exist without so much as a whisper of lust, and that honor alone can compel a man to give up a royal crown, thus losing to another the woman he loves, without once saying, “I've got to live with myself.” This is not parody or satire or farce, although it is rich with droll humor—both intentional and not. The intricate plotting reminded me of the sort of outrageous tangles of expectation and fortune that enliven Shakespeare's comedies.
Rudolf, the indolent fop I mentioned above narrates the first novel, the one with Zenda in the title. On the road to observe the coronation of his distant cousin, also named Rudolf, as king of Ruritania, he becomes enmeshed in a scheme to save the throne from the cousin's evil brother, Michael, who has drugged the king to prevent him from receiving his crown. The political situation requires that a king be crowned on this particular day. Else Michael will usurp the throne in his place. Well, Rudolf the English fop just happens to be the spitting image of Rudolf the unconscious king. Thus, the king's loyal sidekicks...oh, you know what comes next. Rudolf the fop is crowned and promptly falls eternally in love with the king's betrothed, Princess Flavia—and she with him. Can we see the plot thickening here? Believe me, it doth. Yet, with all comedic tropes and nuances aside, I found something deeply refreshing with how things play out. 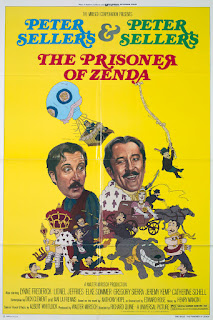 Black Michael (called such from his hair color, contrasting with his brother's red locks) abducts the unconscious Rudolf and locks him in a dungeon at the Zenda castle. There the real king remains for three months, wasting away, while his stand-in reigns with Princess Flavia, and with overwhelming popularity. Meanwhile the king's loyal sidekicks, now loyal to the stand-in, scheme to rescue the real king from Black Michael. Here's the refreshing part: do we suppose today, in the era of covfefe, should such a dilemma face a head of state—to rescue the real king and give up the crown or...is there any doubt? If the stand-in can get away with it? Would he today? Are we laughing yet? Or weeping?
Perhaps today's scenario is indeed the natural one, no matter what ethos prevails in what era, and this Victorian literature is only silly fantasy. Probably. Most likely. Hell, yes. Yet, Anthony Hope has given us believable characters who ruminate these tough questions and make us—me anyway—believe for the moment that human character is capable of rising to noble heights against all the demonstrable odds, covfefe or no. To me The Prisoner of Zenda is a triumph of hope by a fittingly named master.

More demonstrations of this nobility are presented in the sequel, named for the villain in Zenda: Black Michael's most devious henchman, Rupert of Hentzau. I'd give too much away of Zenda to go into Rupert of Hentzau in any detail, save to say the suspense involves a document that could ruin Princess Flavia.
I'll leave off here with one quote from the English fop Rudolf, which gives a glimpse of the insight and wisdom Anthony Hope brought to these novels: “He could not appreciate—I will not say an honest man, for the thoughts of my own heart have been revealed—but a man acting honestly.”
No covfefe there.