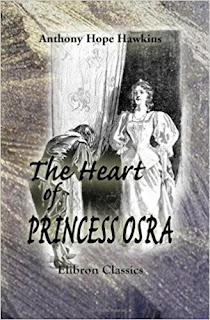 Poor Princess Osra. For her, men kill, allow themselves to be killed, go mouth-foaming mad, give up worldly riches, all, we must believe, charmed solely by her beautiful face. Other than her height--she is tall—we are told nothing of her physicality below the chin. This is not a failing of author Anthony Hope, who wrote The Heart of Princess Osra in Victorian England when proper literature required readers to lean a tad heavier on imagination than today's. Heart, on the other hand, was as much a code for love back then as it is now. Nor have the varied applications of love varied noticeably over the subsequent centuries, and perhaps even in previous ones, as Osra is set more than a century back, in the early seventeen hundreds.


Today's male readers not accustomed to imagining female pulchritude beyond such descriptions as blitzkrieg bazookas and gams that never quit need not fear Hope's clues too subtle to stoke a healthy libidinal pulse. Hope knew women and men who loved women. He knew attraction's nuances, of which physical beauty is only a part. He demonstrates this acuity in the deliciously clever scene between Osra and the Marquis de Mérosailles, a French nobleman and friend of Osra's brother Rudolf, crown prince of the fictitious Germanic country Ruritania. 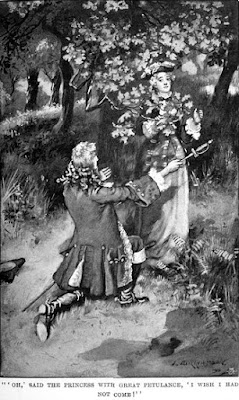 The marquis and Rudolf have bet the marquis cannot win three kisses from Osra, who is noted for her indifference to men's charms. To win her sympathy first, the marquis feigns a grave illness that has him bedridden. The ruse works so well, with Osra fussing over him, and even kissing him once on the forehead, that the marquis, having fallen in love and feeling rotten for what he did to her, confesses and rides off into the forest to kill himself. Osra, whose first reaction is rage at being fooled, then realizes maybe the marquis does love her, and rides off after him to prevent the suicide. She catches up with him and says she forgives him:
"I cannot believe that you forgive. The crime is so great," said he.
"It was great: yet I forgive."
"I cannot believe it," said he again, and he looked at the point of his sword, and then he looked through the leaves at the Princess.
"I cannot do more than say that if you will live, I will forgive. And we will forget."
"By heaven, no," he whispered. "If I must forget to be forgiven, then I will remember and be unforgiven."
The faintest laugh reached him from among the foliage.
"Then I will forget, and you shall be forgiven," said she...


“And she went in with a smile on her lips.” 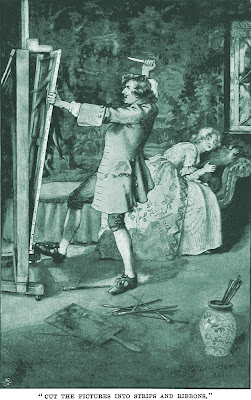 While these stories on the surface are about Osra's face and the power it has to make men do brave and foolish things in her behalf, ultimately it's her heart, her quest to understand love, that ties them together. She's attracted to some of her suitors, admires them, finds them not wanting in any way, and wishes she could love them as they love her. But to no avail. Meeting a couple of men who clearly do not love her, while they rouse her competitive feminine wiles, fail to awaken whatever it is in her heart she needs to feel love.
One of these men, Prince Ludwig of Glottenberg, offers this insight after she finds him with his secret dying wife: “For though you are more beautiful than she, yet true love is no wanderer; it gives a beauty that it does not find, and forges a chain no charms can break. Madame, farewell."
And Osra was for a long time very sorrowful for the fate of the lady whom the Prince of Glottenberg had loved; yet, since she saw Ludwig no more, and the joy of youth conquers sadness, she ceased to mourn; but as she walked alone she would wonder more and more what it might be, this great love that she did not feel.

The Heart of Princess Osra is the prequel in Hope's famous trilogy that began with The Prisoner of Zenda and its sequel, Rupert of Hentzau. Critics have deemed Osra not as memorable as the other two. Maybe it's just me, whom the critics no doubt would deem most accurately a sentimental fool, but I've become rather stuck on Princess Osra.