Sitting here trying to think of how to begin my reaction to this enormous, daunting history, God's Red Son, a memory from my sadly distant childhood has just popped into my head. I was in what today is called middle school—fifth or sixth grade—and we were getting ready for parents night. As class let out for the day, I glanced at the desks of my fellow pupils, upon which our teacher had placed the most recent essay we'd written. I could see that whatever the single sheet of paper on the desk of my friend John contained was much briefer than mine and probably all of our classmates'. I leaned down and read the single sentence: I don't know what to write. I left the room wondering what John's mother and father would think when they visited the classroom with the other parents that night. As I sit here now, though, about to conclude this opening paragraph, I feel a deep empathy with what John might have experienced so long long ago, sweaty fingers gripping his pencil, eyes frozen with stubborn panic on a blank sheet of paper. 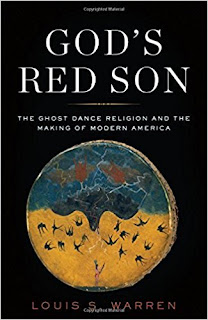 This one's for you, John. I'm stuck here, just as you were then. But I've learned a trick or two, and I'll be damned if I can't push through that soul-numbing dread of failure, get something started at least, keep alive hope the words will find me.


We grew up in the neighborhood playing cowboys and Indians. We took turns on either side despite our preferences. I believe I was Gene Autry that afternoon I was chasing you and J.J. through the backyard—or you guys were chasing me—and I slipped going up the grassy, stony incline from the Thiedes to the strip behind our duplex, right hand bracing my fall. I remember which hand because the three-stitch scar is still visible on the heel of my palm more than half a century later. Considerably more. Gadzooks.


We never wanted to be the Indians, because that meant we had to lose. Just as the Indians always deservedly lost in the movies we watched at the Rudalt Theater on weekends. Years later, at the University of Wisconsin, the jocks all took a Western history course they called “Cowboys and Indians.” They took it because it was said to be so easy even a jock could pass it without studying. I should have (might have) taken it, too, but if I did it must have been so bland I can't remember anything about it, or else I flunked it and am in denial . After reading God's Red Son I would assume the course taught that the Indian “threat” on the great frontier came to a blessed end with the Dec. 29, 1890, 7th Cavalry victory over a band of crazed, bloodthirsty Indians near the Pine Ridge Reservation in South Dakota. There, brave troopers crushed a murderous insurrection by vengeful savages who'd been whipped into atavistic hysteria by some mumbo jumbo hoodooboo called Ghost Dance.


God's Red Son, written by an acclaimed professor of western US history at the University of California, puts the lie to all of that hooey. Prof. Louis S. Warren's meticulous research reveals how national economics, politics, ignorance, and misunderstanding of a new religion led to the cataclysmic massacre of 146 Lakota men, women and children at Wounded Knee Creek. The only specter to emerge in all of this was the idiotic notion the ghost-dancing Indians posed any threat at all, to anyone. Ghost dancers made up about a third of the 250,000 Indians reported by the 1890 census, compared with an estimated 63 million other Americans.


“Practically everybody assumed that the teeming mass of Americans...would any day now engulf Indian villages and usher the native peoples, finally, into oblivion,” Warren writes.

It was in large part a response to signs of this imminent extinction that spawned the new religion, with its signature dance. It was a way to address the rapidly changing world, giving Indians hope to survive without turning their backs on their heritage, as the U. S. government demanded while stealing their land and herding them onto reservations. The non-Indians were restless in a crumbling economy, and drought was scorching the West:


Indian reservations occupied poor land that had little game and few wild plants of any use. In the withering heat, what grass was left by cattle and sheep (most of them owned by white ranchers) quickly shriveled. Scarce game vanished. By 1885, many Indians had turned their hand to farming, but in 1890 their crops wilted. Starvation, that old monster, circled the camps. It was thus not surprising that some Indians had turned to a new faith...In doing so, Indian believers unwittingly launched upon a collision course with the anxious American public.

This new religion started among a tribe of Northern Paiutes, known as “Fish Eaters,” who lived on the shores of Pyramid Lake in Nevada. It's founding prophet was a man called “Jack Wilson” after the ranch family name where he'd been employed since childhood. He was known also by his Indian name, Wovoka. Himself the son of a shaman, or holy man, Wovoka began getting attention in the tribe and neighboring ranches by appearing to control the weather, and with his extended trances, some lasting several days.


“'He wasn’t shamming,' recalled Ed Dyer, the storekeeper who occasionally translated at Wovoka’s meetings with government investigators in the early 1890s. 'His body was rigid as a board. His mouth could not be pried open.… The whole matter is one to which I still confess considerable puzzlement.' Initially friends tried—and failed—to revive him, and some feared he was dead. But in time they became accustomed to his trances. Awakening after a full day or even two, [Wovoka] would describe entering heaven through the Milky Way, wrapped in a blanket. It was a strange story but hard to dismiss, for when he awoke he had ice in his hand.” 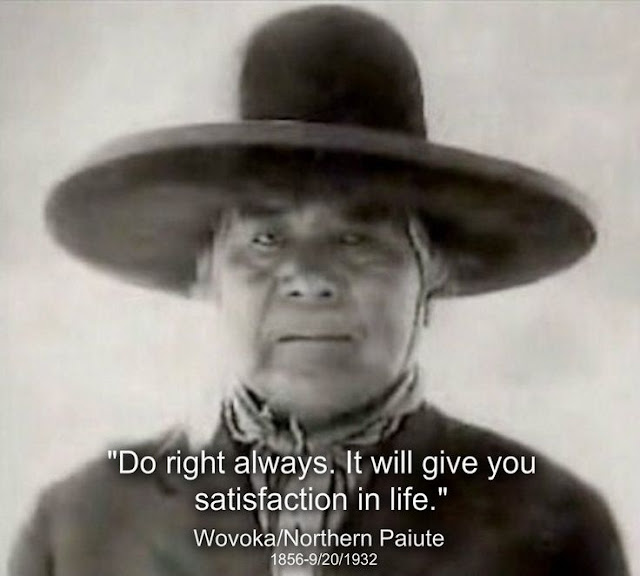 The message he claimed to bring back from these visits to “heaven” was hardly one to frighten the region's white settlers. In fact it was strikingly similar in many ways to the teachings of Christ: love one another, don't steal, don't fight, tell the truth, and “work for the white man.” Word of Wovoka's “miracles” reached tribes as far as Oklahoma and South Dakota.


Evidently it was the dancing that scared the settlers, who worried it meant the Indians were planning to make war. Reminiscent of the traditional Indian Sun Dance, the Ghost Dancers joined hands in a circle, rotating clockwise as they danced. They called it ghost dancing because it was intended to summon spirits of dead relatives and friends, as Wovoka had promised would happen. The federal government had banned the Sun Dance under an “assimilation” policy forcing Indians to give up their old ways and become “civilized.” Indians came long distances to attend this revival of the old dance under a new name and with new meaning. Some dances had hundreds of participants. Eventually a nervous reservation agent called for help, and President Benjamin Harrison sent troops west to put an end to the dancing.


The Wounded Knee massacre seemed to be just what the feds wanted, and for a while the Ghost Dancers danced with more discretion. But the religion was in no way stamped out.


“The Ghost Dance,” Warren concludes...”was no last gasp of Indian resistance, but rather a movement that promised believers a means to [keep their Indian identity] while surviving conquest and the reservation era.”