THE COMPANY YOU KEEP (the movie) – Robert Redford, dir.

The Company You Keep, the novel by Neil Gorden won rave reviews. Critics, from what I found online, pretty much ganged up and panned the movie, by and with Robert Redford. 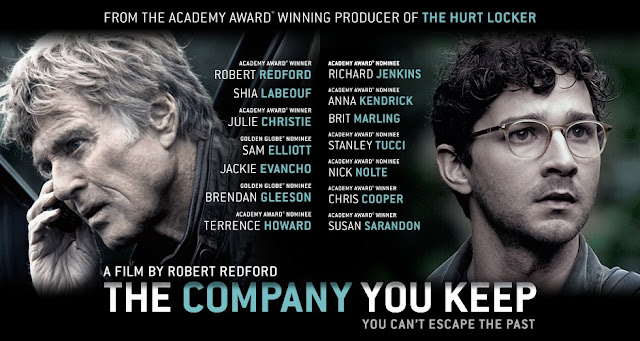 It didn't do badly at the box office, returning more than double its $2 million production costs. I hadn't known of The Company You Keep, book or movie, when I spotted the DVD in a rack at Dollar General. The big-name cast—including Redford, Shia LaBeouf, Julie Christie, Susan Sarandon, Nick Nolte, and Chris Cooper--and the story sold me. I took it back to my apartment and watched it. Twice. Then I bought the book, and read it through with pauses only to pee, eat, or sleep. Took me a couple of days. I'll no doubt read it again in the near future. I'm considering watching the movie again too, any day now.
Not being a student of film, my infrequent movie viewings are for entertainment only. I do not watch with a critical eye, and, appreciating the ancient practice of male actors portraying females, am more than willing to suspend natural disbelief on the silver screen. It did not bother me in the least, as evidently it did some critics, that seventy-six-year-old Redford played the 40-year-old lead as the outed Weather Underground fugitive with a seven-year-old daughter. I had the sense critics who made much of this were less concerned with Redford's age than resentful of Redford's persistence in the industry. For the record, I've always been resentful of the bastard's beauty, but, as I said, I can see past such distractions in the fantasyland of disbelief.
The other complaint was the talking: too much explaining and arguing about political issues in a long ago context. Again, this didn't distract me. Maybe the critics, younger folks I suspect, found it too old and musty to work. I found it vitally relevant, to the story and to me. I was politically aware in the '70s. I participated in some of the anti-war activities on campus. I fantasized fugitive Weatherwoman Bernardine Dohrn showing up at my apartment desperate for shelter, which, of course, I would gladly provide. The explaining and arguing awakened my nostalgia. Much of it is as relevant today as it was fifty years ago. I have to wonder if these film critics bothered to read the novel, in which the explaining and arguing seemed to take up most of the plot.
The novel is more complex and fascinating as story. Redford's movie took a small part of that story, streamlined it, and turned it into a thinking person's thriller (I don't believe a gun appears at all, and it is completely explosion-free). In one deviation from the novel, the Redford character's wife is mentioned only in passing as dead from a car crash. In the novel she's crucial to the plot, which involves a bitter custody battle for the seven-year-old girl. It's the reason the main protagonist—the outed Weather fugitive—abandons his law practice to find his fugitive former girlfriend and persuade her to surrender to clear him of charges in a bank robbery in which a guard was killed. So he can keep the daughter away from his drug-addict ex-wife.
In the movie, the Redford character simply wants to avoid prison so he can raise the daughter, whom he leaves with relatives while he hunts for his ex-girlfriend. Admittedly this weakens the plot, as noted by some critics. The book version is more plausible. Probably just as well I saw the movie before reading the book. I'll watch it again tonight to see how much this matters.