It took me almost twice as long to read James Jones's WWII trilogy as it took him to write it. I was about ten years late when the first novel—From Here to Eternity—came out, in 1951. Fairly current when the second—The Thin Red Line—arrived, in 1962 (a year before I entered the Army), but for some probably explainable reasons when Whistle, the last one, hit the bookstores in 1978 I hesitated, a hesitation that lasted until a week ago. 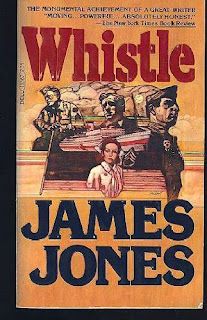 Don't worry, the span is too long for me to remember enough to address all three novels here. In fact I've just now downloaded From Here to Eternity, mainly to revisit Whistle's four central characters when they were comparative youngsters getting their start in army life. It doesn't bother me that the names will be different. Jones had wanted to keep them the same throughout the three books. He scrapped that plan when he found near the end of Eternity the story demanded he kill off one of the four characters. He addressed this problem in an author's note:
Unfortunately the dramatic structure—I might even say, the spiritual content—of the first book demanded that [...] be killed in the end of it. The import of the book would have been emasculated if [...] did not die.
When the smoke cleared, and I wrote End to From Here to Eternity, the only end it seemed to me it could have had, there I stood with no [...] character.


Jones explained this was especially tricky, as he'd had big plans for [...] in the next two books. His solution was to change the names of all four characters, which he did for Thin Red Line and again for Whistle. "But," he wrote, "I changed them in such a way that a cryptic key, a marked similarity, continued to exist as a reference point with the old set of names. It seems like an easy solution now, but it was not at the time." Jones wrote this note four years before his death of congestive heart failure. He left about a dozen pages of Whistle unwritten, but his friend and fellow novelist, Willie Morris, inherited the manuscript and summarized the remaining scenes based on conversations with Jones and on Jones's notes. The book was published the following year.
I recall this happening—Jones's death and Morris's contribution—and I remember reading a little about Whistle, that it concerned the four central characters returning from their war, wounded both physically and emotionally. I suspect the reviews mentioned unhappy endings for the four. I've never liked unhappy endings, probably because I tend to identify closely with fictional characters. I've matured somewhat in recent years, though, and can appreciate the occasional bummer if it's handled well in a story. My literary advisor, Fictionaut's Kitty Boots, has guided me artfully in this direction.
I knew early on—from the story itself--to expect Whistle's bummer ending, that it was inevitable, but I had no idea how big a bummer it would be. I'm wondering now if knowing what was coming, knowing what the story required him to do with these characters of his he'd lived with most of his life, if that didn't have a bearing on Jones's cashing in before he had to actually write those scenes. In her memoir, Lies My Mother Never Told Me, Jones's daughter, Kaylie, recounts an incident when her father came out of his writing room weeping because he'd just killed off a character. "My father was shaking, his face twisted up, tears flowing," she said.
Jones depicted the collective consciousness of the entire unit, Charlie Company, in Thin Red Line. This focus shrinks to the four central characters in Whistle. Wounded in the South Pacific, they're shipped Stateside to a military hospital where they struggle now trying to heal sufficiently either to return to duty or be discharged. The battles now are fought in their heads, scarred with horrors and guilt and a deadly cynicism, torn between acknowledging their human frailty and brandishing their illusion of manhood. Of the four, Bobby Prell's fight to save his legs hit me the hardest, as I believe it did his three buddies.
Shot multiple times in a Japanese ambush that killed two members of his squad, Prell nonetheless led the remaining men to safety and provided vital intelligence of an impending enemy attack. His actions saved countless American lives and led to his commander putting him in for a Medal of Honor. His first sergeant, however, scoffed at the honor, claiming Prell had taken an unnecessary risk leading his squad into the ambush. Yet, when Prell's mutilated legs failed to heal, threatening his life, it was the sergeant, Winch, using reverse psychology, who sparked in Prell the will to live, thus allowing the legs to heal. Prell's other two buddies had given up trying to encourage him, after he refused to give permission for the legs to be amputated. Here's Winch:
What Prell needed was enemies. An enemy, if he was going to fight. He wasn’t complex enough to fight without an enemy there in front of him.
“You reckon they’ll give me a tin cup and some GI pencils to sell, when they let me out of this?” Prell said from the bed.
“They’ll do better than that,” Winch said. “They’ll give you a pension. And a leather leg. So you can go down to the American Legion on Saturday nights and show the boys your stump and tell them how you fought the war in the South Pacific. Just don’t tell them about your squad.”
“You son of a bitch,” Prell said. His voice did not increase in tone or volume, but the timbre of it got taut, vibrant. “I’ll kill you when I get out of this. That’s a promise. I’ll spend the rest of my life looking you up, if it takes the rest of my life, and kill your sharecropping ass.”
“I don’t think so,” Winch said. “I’ll probably be dead long before you’re well enough to do anything.” There was probably more truth in that than he realized when he said it, Winch thought, and grinned. Oh, well. He would be his enemy. Everybody needed one enemy.
“At least, you won’t be going around leading any squads into any death traps,” he said.
The Indian eyes of Prell glittered at him from the bed. He didn’t answer.
“I think you’d better go,” the ward nurse said nervously from beside Winch, “really.”
“Okay. Well, take it easy, kid,” he said. “Keep fighting.” He turned on his heel.
Outside in the corridor he had to lean against the wall. He felt drained and absolutely gray all over, and had to suck in energy with his breath.
Less than a week later Prell took a turn for the better, and his legs began to heal. Happy ending for Prell? Well, there's more. 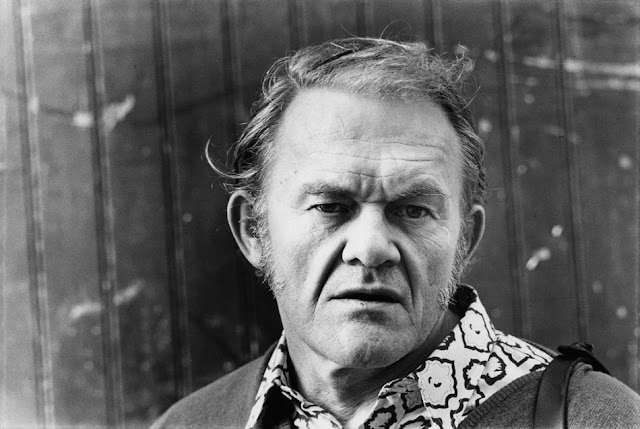 Then there's the title. Doesn't seem to fit with the first two. It comes from this ancient French ditty Jones includes as the book's epigraph:
Bounce, and dance; bounce, and
dance;
Jiggle on your strings.
Whistle toward the graveyard.
Nobody knows who or what
moves your batten.
You’ll not find out.