Dan Rhodes, sheriff of Blacklin County, Texas, introduced me to the Zero® candy bar. Until then the Fifth Avenue® bar had been my favorite. It still is. Not that the Zero is a bad bar. It's not, in fact it's pretty good.

It's just not a Fifth Avenue. I've had only two Zeros in my life. I bought the first one at the Dollar General store out of curiosity because Sheriff Rhodes was hooked on them while solving a mysterious homicide in Murder in the Air, the first in the Rhodes series I read, and the 18th in the series. 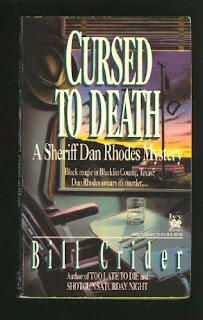 I had my second bar while reading another Rhodes mystery, the first in the series, Too Late to Die. I figured it would be fun to chew on my Zero bar as Sheriff Rhodes chewed on his while solving the murder. But Rhodes hadn't discovered the Zero bar yet. He still hadn't discovered it in Cursed to Death, the third in the Rhodes series.

[Darn it, I hate to break up the narrative flow here but I got to thinking about the Zero bar, and suddenly had to walk down to the Dollar General and get another—my third. I ate it on the way back to the library. It was as good as I remembered, but it still wasn't a Fifth Avenue. The Fifth Avenue, by the way, is becoming a tad hard to find. None in the Dollar General or in the Rite Aid next door. Might be a mystery that needs looking into.] By now you're undoubtedly wondering if I've slipped off the trolley tracks of the standard book review format. Not that my reviews (which I prefer to call “reports” because I do not feel qualified to critique any literary endeavor) ever follow the standard trolley tracks. In fact the only trolleys I remember seeing were what my parents called “streetcars” and they were in Milwaukee when I was a child, and, so far as I know, are long, long gone.
To those of you getting angry or horribly bored now--and I'd be surprised if at least some of you aren't--I humbly submit that my attempt to write like Bill Crider writes his Dan Rhodes mysteries has fallen woefully short. Here's what I mean:
Details. They were always important in any investigation of any crime, and it was funny how often you overlooked them, even the most obvious ones. But it wasn’t as if they were forgotten, or never noticed in the first place. Sometimes the details suddenly jumped into your mind, coming all at once out of whatever dark corner they’d been hiding in, and made everything clear. Maybe things would work out like that in the Martin case, which was still bothering Rhodes. It wasn’t easy to think about murder and a missing man when your mind was on being engaged. Or it could have been the other way around. It wasn’t easy to think about being engaged when your mind was on murder and a missing man.
Rhodes gave it up. He went out back, fed Speedo [his dog], and drove back to the jail.
Did that help? Not yet? How about this:
Rhodes had entertained several thoughts. Kidnapping hadn’t been one of them. “No note,” he said. “No phone calls. At first I thought he’d just gone out on a party, but now I don’t know. It’s pretty certain that he didn’t leave that van there, all wiped down.”
“Then we can say that you suspect ‘foul play’?” She pretended to be writing notes on a nonexistent pad.
“I don’t say things like that,” Rhodes told her.
“I know. It’s part of your charm.”
Rhodes didn’t say anything to that. He didn’t know what to say. He didn’t think of himself as having any charm, and he thought maybe Ivy [his betrothed] was kidding him.
Ivy might have been kidding Rhodes, but she was right. His earthbound, uncomplicated common sense is part of his charm—a large part of it, and of Crider's narrative voice in the 24-book Dan Rhodes series (with the 25th due out in August.) I intend to read them all, gulp them down like Cheetos®, but I can't be obvious about it. They must be slipped in surreptitiously (a word Sheriff Rhodes would never use) between the darker, more complex works my literary advisor, Fictionaut's Kitty Boots, assigns periodically. I can do this, but I can't report on them all, not with Ms. Boots keeping an eye on this blog. The inadvertent confrontation might be similar were Ms. Boots, expecting me to be watching a televised production of Der Ring des Nibelungen, to catch me instead sneaking a peek at a rerun of The Andy Griffith Show. Truth be told, Sheriff Rhodes enjoys watching Andy Taylor, Mayberry's widowed sheriff, solve domestic problems and the occasional crime like those Rhodes handles in Blacklin County. Short of murder, that is. It's something Rhodes ponders (altho he would never use that word):
As he watched the episode unfold, Rhodes wondered if anyone had ever disappeared in Mayberry. Or if anyone had ever been murdered. He was sure that Sheriff Taylor could have solved things in less than thirty minutes and then made sure that Barney got credit for the whole thing. Rhodes wished his own case were that easy.
Rhodes's case is indeed perplexing (nor that one—I'm not trying to mimic Crider anymore). A local dentist whose hobby is buying rental properties goes missing after one of his tenants, enraged because he removed the TV from her home for nonpayment of rent, came to his office and put a loud, frightening curse on him in front of his entire office staff. And then, as Rhodes bumbles genially along trying to find out what happened to the dentist, the dentist's wife turns up clubbed to death in their home. Definitely not your customary Mayberry scenario.
Sheriff Rhodes, unlike my recollection of his TV likeness, gets into some serious scraps. He's neither a macho type nor a big man, like Sheriff Taylor. He just wades in and does his job. Here's Rhodes expecting trouble at the start of a confrontation with a suspect he wants to question: “Swan looked even bigger than he remembered. Rhodes’s pipsqueak neck tingled in anticipation of Swan’s fingers encircling it.” They fought. Rhodes's neck survived.
Rhodes doesn't like to use his sidearm, either, but he uses it, and not to especially good effect. Does he solve the murder? Does he find the missing dentist? Does he manage to keep from screaming at the two wiseass geezers who run his jail and handle the dispatch radio? Of course, to the first and the second, and yes to the third.