Almost afraid to admit it in a crime fiction community, but The Ax is the first of Donald E. Westlake's many highly acclaimed novels I've read. Doubly dangerous to be posting my report on this blog, risking its being seen by my literary advisor, Fictionaut's Kitty Boots, who most certainly would allow an inquiring eyebrow to ascend over a second consecutive popular crime novel in this space instead of something more literary. To her I would appeal for lenience in that both The New York Times and Washington Post critics raved in their reviews of The Ax. D. Keith Mano in the Times presumably stifled a gasp at its "excruciating brilliance." Too, Ms. Boots likes dark, and The Ax, as one might guess from its title, is indubitably dark. Right from its opening sentence: "I’ve never actually killed anybody before, murdered another person, snuffed out another human being." 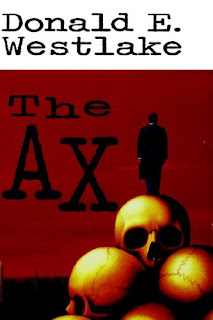 Soon enough our narrator is watching a TV news account of two of his murders:
It’s strange, but someway or other I don’t entirely recognize my actions from the blonde woman’s recountal. The facts are essentially right; I did chase the wife across the lawn and shoot her there, and I did intercept the husband in the garage and shoot him there, and I did leave without a trace, without witnesses, without clues in my wake.
But somehow the tone is all wrong, the sense of it, the feeling of it. These words she uses—“brutal” “savage” “cold-hearted”—give completely the wrong impression. They leave out the error that caused it all. They leave out the panic and confusion. They leave out the trembling, the sweating, the icy fear.

By now I'm the narrator. This happens routinely with me when I read first-person stories. I identify with the one telling the story—even if he or she is not likeable. I can't help it. Sort of a reader's Stockholm Syndrome maybe. I can think of only one instance when a first-person narrator, a psychotic serial killer, was so despicable, so repugnant that I could not stay with him. When I could see I was becoming him, I abandoned the book and took a hot shower. No such trouble being Burke Devore. I didn't especially like him, but then I don't especially like myself. I couldn't help empathizing with Devore. Considering his circumstances, it was hard to dismiss his rationale for responding the way he does.
He's been out of work a couple of years. The specialty paper mill where he was a manager merged with a Canadian company and moved his job across the border. His once comfortable life with a loving wife and two teenage kids is coming undone. He isn't the only victim. Corporate downsizing and middle-management layoffs are rife. He gets philosophical periodically to bolster his resolve. And he makes sense. This is happening in 1997. It's gotten steadily worse since then:
Long-term joblessness, it hurts everything. Not just the discarded worker, but everything. Maybe it’s wrong of me, snobbish or something, to think this hits the middle class more than other people, because I’m middle class (and trying to stay middle class), but I do think it does, it hurts us more. The people at the extremes, the poor and the very rich, are used to the idea that life has great swings, now you’re doing well, now you’re doing badly. But the middle class is used to a smooth progress through life. We give up the highs, and in return we’re supposed to be protected from the lows. give our loyalty to a company, and in return they’re supposed to give us a smooth ride through life. And now it isn’t happening, and we feel betrayed.

He illustrates this betrayal with a lesson from Scottish history. Tenant farmers in the Highlands there, who for generations had rented land, living in little stone houses they'd built themselves, were forced to leave when the landowners decided raising sheep would bring in more money than the farmers' rent. Called “the Clearance,” this process started near the end of the 18th century and continued for decades. Devore gives us one of the Oxford English Dictionary's definitions of clearance: The clearing (of land) by the removal of wood, old houses, inhabitants, etc. "You’ll never see a clearer proof that history is written by the winners," he concludes. "Just think; one comma less, and the inhabitants would have fallen into the etc. It’s the descendants of those landlords that are doing the clearances called downsizing now. The literal descendants, sometimes, and the spiritual descendants always."
They left, not willingly. Some went to Ireland, some went to North America, some went to hell. Some died of cold or starvation. Some resisted, and were given the chop right there, on their own land. Well, no; not their own land.

“Some resisted.” Devore decides to follow their example to save his way of life and that of his family. He decides to be a deliverer of “the chop” rather than the choppers' victim. He chooses as his victims not the corporate heads who are doing the modern clearances, but competitors for his one chance to get a “position” similar to one he'd been chopped from. He studies the trade journals until he finds a suitable mill that looks secure enough to avoid the kind of downsizing running rampant in the paper production industry. He decides to “create” a job for him there by killing the man already holding it. Next he creates a letterhead purporting to be a small mill, and takes out ads in the trade journals seeking someone to fill the kind of position he's seeking. He's soon flooded with applicants. He studies their resumés, winnowing them down to the six who likely would best him competing for the vacancy that will soon open up unexpectedly. Now he sets out to kill his six competitors.
I'm not with him at this point. Not yet. The empathy's not quite there. But Devore slowly wins me over. It helps that he doesn't like what he believes he has to do. He's basically decent. He doesn't celebrate after he's “snuffed out” one of his victims:
I’m weeping when I get back to the motel, still weeping. I feel so weak I can barely steer, hardly press my foot against the accelerator and, at last, the brake.
The Luger is still in my pocket. It weighs me down on the right side, dragging down on me so that I stumble as I move from the Voyager to the door to my room. Then the Luger bangs against my hand, interfering with me, while I try to get into my pants pocket for the key, the key to the room.
At last. I have the key, I get it into the lock, I open the door. All of this is mostly by feel, because I’m sobbing, my eyes are full of tears, everything swims. I push the door open, and the room that was going to be warm and homey is underwater, afloat, cold and wet because of my tears.
No crocodile tears, these. The guy's a wreck, continually arguing with himself about this “project.” And this:
I must have been crazy, out of my mind. How could I have done these things? Herbert Herbert Everly. Edward Ricks, and his poor wife. And now Everett Dynes. He was like me, he should be my friend, my ally, we should work together against our common enemies. We shouldn’t claw each other, down here in the pit, fight each other for scraps, while they laugh up above. Or, even worse; while they don’t even bother to notice us, up above.
But:
The millennium is shaking us up, the way a high-pitched tone shakes up a dog. [...]
And that’s why I woke up in terror, thinking, What am I becoming? What have I become?
I’m not a killer. I’m not a murderer, I never was, I don’t want to be such a thing, soulless and ruthless and empty. That’s not me. What I’m doing now I was forced into, by the logic of events; the shareholders’ logic, and the executives’ logic, and the logic of the marketplace, and the logic of the workforce, and the logic of the millennium, and finally by my own logic.
Show me an alternative, and I’ll take it. What I’m doing now is horrible, difficult, frightening, but I have to do it to save my own life. [...]
I’m harboring an armed and dangerous man, a merciless killer, a monster, and he’s inside me.

We're at that point now where you don't want me to stop, I know. You want me to copy the entire novel right here in my blog. Not gonna do it. Wouldn't be prudent. But I'll leave you with this thought, the final paragraph of the Times's gasp-stifling (presumably) D. Keith Mano's review: “As novels go, The Ax is pretty much flawless, with a surprise ending that will unplug your expectations. Burke Devore is American Man at the millennium--as emblematic of his time as George F. Babbitt and Holden Caulfield and Capt. John Yossarian were of theirs. Westlake has written a remarkable book.
“If you can't relate to it, be thankful.”