Belle Boggs looks a little like a young Joyce Carol Oates, and her stories, with their intimate depiction of an out-of-the-way patch of rural South, evoke something of the feel of William Faulkner. Her style, though, the words she chooses and the way she organizes them to draw her characters and tell her stories, is strictly hers. 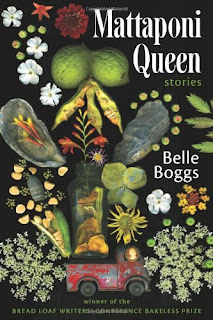 The burden is now on me to try to convey a bit of the magical effect Belle Boggs’s stories have on me and, I hope, will have on you. I accept this burden cautiously as an assignment from Percival Everett, noted author and Distinguished Professor of English at the University of Southern California. I have not met Prof. Everett, nor, in fact, had I any knowledge of him before I read his preface to Belle Boggs’s collection of stories, Mattaponi Queen. I then quickly learned he was the judge who awarded Mattaponi Queen the coveted Bread Loaf Writers’ Conference Bakeless Prize for 2009.
In his preface, Prof. Everett warns he is “not easy to please. So I’ve been told.” He goes on to list some of the things that do not please him in stories. I agree with all of them, and yet would be “scared shitless,” to quote Stephen Stills on stage performing at Woodstock in 1969, were I to subject any story of mine to Prof. Everett’s scrupulous eye no matter what prize might be at stake (good golly, did I miss a comma back there?). You’d like to know what these things are, wouldn’t you, that might earn you a scornful rejection were he to read a story you wrote containing one or more of them? Okay, brace yourself:


So we know Belle Boggs at least has “stones,” or “grit,” as we say here in the rural South (wrong comma placement? S-s-sorry, Professor!). Stones, indeed. One can only try to imagine the magnitude of Boggs’s gush of triumphant relief when she learned that Prof. Everett liked her stories. Here he tells us why:


It’s wonderful that in these stories we get a rare glimpse of Indian and reservation life in Virginia. There is not a lot of literature from eastern tribes. I write this in order to point out that none of this is why these stories are good. It is always good to hear new voices, but the newness of a voice alone carries no literary value. These stories are good because they are strongly imagined, finely controlled, and well crafted. These stories are good because they are true, true in that way that only good fiction can be. The last thing a reader or this writer needs is my clumsy attempt to synopsize any bit of any story. I will not do that to good work. If you don’t know me well enough to trust me about the value of these stories, you will after you read them.


Any wonder why I’ve let Prof. Everett carry the load thus far? And yet suddenly he wimps out with a flimsy excuse to avoid telling anything about any of the stories! Are not writers taught to show rather than tell? Is not the good professor abdicating this rule by telling us why Mattaponi Queen’s dozen stories are so good without showing us some examples? “Clumsy attempt,” my foot! It’s a lazy excuse and a passive aggressive handing off to his minions—me, in this case—to give you some examples of what I like about Mattaponi Queen. Clumsy or not. Someone’s got to do it.
The way I’m going to do it is to tell you a little about my two favorite characters, and give you an excerpt so you can have a taste of the flavor of these stories. The characters? Wayne “Skinny” Littleton, a full-blooded Mattaponi Indian who lives on the reservation in King William County, Virginia, and is referred to almost exclusively simply as “Skinny.” He’s a mechanic and a father and he has many friends. He’s featured in two stories. Here’s something from one of them:


Skinny didn’t mind joking about his death. He had a drug-resistant strain of hepatitis C, he’d been an alcoholic and a painkiller addict for years, and he never expected to live this long. Sometimes, when the ache that collected his joints and muscles and organs into its tight net got really bad, when he couldn’t throw it off with Percocet and Budweiser, he even looked forward to dying. He imagined, by comparison with the ache, that it would be a relief.
But the truth was he had gotten used to living. He had his regular customers with their steadily deteriorating vehicles, all dependent on him; he had his friends, his cooking shows. He had his house to work on, to finish; he wanted to put in a hot tub and a second bathroom. He had his kids, Erin and Tyler, who could hardly be called kids anymore and with whom he communicated mostly by telephone. He looked forward to small things: Friday-night bluegrass on the public radio station, driving across the reservation to Bruce’s house for supper, fishing the Mattaponi in his dented aluminum johnboat. His first beer of the morning, his last beer of the night, and all the beers in the middle.


Next comes Cutie Young. She is not one of my favorite characters. In fact she appears to be no one’s favorite person. I mention her only because of her proximity in the narrative– three stories—to my other favorite character, Loretta (whose last name I cannot remember or find using Kindle’s search function—sorry, Prof. Littleton). We first meet Loretta narrating my favorite of the collection’s stories, Imperial Chrysanthemum. She is the tough, sensible nurse/caretaker of Cutie Young, an arrogant old battleax who represents what’s left of the white aristocracy in this Northern Neck Virginia community. We don’t know precisely Loretta’s race, but she’s evidently a minority, probably Indian. Cutie Young’s obsession throughout Imperial Chrysanthemum is to recover a family heirloom eponymous silver set. Loretta puts up with her cranky tyranny to earn enough money to buy the old riverboat Mattaponi Queen. This she eventually does (not a spoiler because there was never any doubt in my mind that she would). Cutie leaves us in the collection’s final story, Youngest Daughter.
A nameless old man delivering eggs to Cutie Young’s house discovers her dead, presumably of natural causes. He considers how he will break the news of the notorious old bat’s demise to his daughter, his youngest, who lives in Los Angeles and hates to come home to “Klan country” even for a visit. “Good riddance, she’ll say.”
This story and the others in Mattaponi Queen comprise an unforgettable debut by a young author whose name before long will become familiar to all who love good literature.
Okay, Professor?