Feeling a tad full of myself for no accountable reason of late, and beginning to worry this aberration might be so noticeable as to get me shunned or possibly punched in the nose, I took a friend’s advice and read an interview with a man who is undeniably and justifiably full of himself. It worked, returning me to my regular unassuming bookish self by means of a psychological mule kick to the ego. Thank you, Kitty, and thank you, Traveler of Worlds: Conversations with Robert Silverberg. 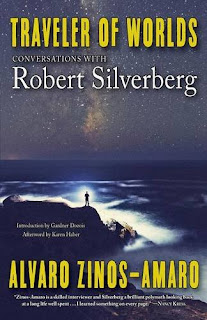 As a naif of the genre I had not heard of 80-something-year-old Science Fiction Grand Master Silverberg. Perhaps the best introduction to him for others like myself is this comment from his wife, Karen Haber, which is included in the afterward to Traveler of Worlds:

Traveling with Bob is like having one’s own portable database for a companion. Imagine Google with a goatee, a glass of Bordeaux in one hand and a fork in the other.
At times it can be more like vacationing with one’s own investigative news team: within the first five minutes of arriving in, say, Guadalajara, he’s taken in the air temperature, made a quick survey of the flora and fauna on the hotel grounds, speculated on the groundspeed velocity of an unladen peacock, scanned the hotel restaurant menu for tortas ahogadas, and mentioned in passing that the name Guadalajara, bestowed by the invading Spaniards, has Arabic roots, Wadi Al Hajara, meaning “river of stones.” Enlightening, yes. Tiring, occasionally.

There’s a saving grace of humor for those who otherwise might be inclined to dismiss Silverberg as an anal-retentive control freak after reading the above perhaps slight exaggeration by his wife. Here’s an example, as Silverberg tells it to his collaborative interviewer, Alvaro Zinos-Almaro:

There are in Sardinia prehistoric structures called nuraghe, which are built of massive chunks of stone, building up to several stories. They’re quite strange, and they’re not found anywhere else. They’re all over the Sardinian landscape, and they’re two or three thousand years old. We toured the nuraghe in between dining at Sardinian restaurants and one day as we were climbing one of the greatest of the nuraghe in southern Sardinia it began to drizzle. And then to rain. And then to deliver lightning. We’re out in the open, clinging to metal railings, as this electrical storm begins, and we’re at the highest point in this field. We looked at each other and thought, “What a way to go.”

Maybe explains the extraordinary interest in weather on subsequent excursions, although after experiencing a moment like that any frequent traveler might have gone on to pursue a working knowledge of meteorology.


In contrast a gentleness also comes through in these interviews. Silverberg’s admittedly strict adherence to form, to expectations of himself and others with whom he interacts, nonetheless allows a rather insouciant acceptance of the odd irregularity in certain encounters where one might expect resistance. An avid collector of ancient curios, he relates an incident where he knew a young boy in Mexico was swindling him. Silverberg was visiting a site “somewhere in Mexico, maybe Yucatán” where the child sold him a statue from country’s earliest known culture, dating back to five thousand BC. The price was five pesos, equal then to seventy-five cents.


“I couldn’t resist it, so I bought it, and here it is. I’m aware that the Olmec statue is not genuine, but it was fun buying it.”


After providing another, similar example of the small swindle, this time purchasing obviously bogus Roman coins, he observes, “We don’t only buy fakes. But when it’s an amusing enough fake we do.”

It is admittedly churlish of me, a feeble attempt to mitigate Silverberg’s ego-vaporizing superiority (ultimately of vastly greater magnitude than necessary to affect my erstwhile need for moderate comeuppance...Don’t believe me? Here’s how SF Hall of Famer/author/editor Gardner Dozois puts it: “Robert Silverberg could without hesitation be added to the list of SF’s smartest practitioners, and even amongst this brainy bunch, his intelligence stands out as impressive...It’s not widely realized by SF readers today, who mostly know only his huge body of novels and short fiction, but in his time Silverberg has written over thirty acclaimed non-fiction books, on topics that range from El Dorado to the Mound Builders of the American West to Mesopotamia to the Seven Wonders of the Ancient World, and from ghost towns to Sequoias to mammoths to atomic scientists to the tribesmen of prehistoric Europe.” It is, of course, to gasp.), that I highlight here his admission to having been unsurprisingly the typical brainy nerd as a youngster who had to be coached by his only friend to behave so as not to be pummeled to jelly by the ubiquitous dumb, resentful “ruffians” any of whom might well have conjured a virulent illusion of presidential timbre in later life.


The revenge part of this classic nerd-to-triumph story begins while Silverberg is still in his teens, with cash-money sales of his short stories to fantasy and science fiction magazines. No papering his study wall with rejection notices à la F. Scott Fitzgerald and virtually all other beginning fictionalists. His white-socked feet hit the ground racing and never turned back.


No question I hate him. I’ve read some of those early stories, published in the late 1950s, and they’re a damned sight better than anything I could write right now! This, when the author was 21, from a story that appeared in 1956 (the same year he won a coveted Hugo Award for “best new writer”--grrrrrr) in an issue of Amazing Stories:

It was beyond her to see that some grease monkey back at the Dome was at fault— whoever it was who had failed to fasten down the engine hood. Nothing but what had stopped us could stop a sandcat: sand in the delicate mechanism of the atomic engine.
But no; she blamed it all on me somehow: So we were out walking on the spongy sand of the Martian desert. We’d been walking a good eight hours.

See what I mean? How could he know at that callow age that women are always right? I’m rather more than a tad older and still get it wrong! Smartass punk, get off my lawn.


So how come I loved Traveler of Worlds and am trying to entice you to read it, too? Am I about to reveal some delightful, scandalous crash—drugs, gambling, plagiarism—something that brings this titan of scholarly, authorly magnificence down to only half a dozen or so tiers above my undeniably lamentable level? No. Have I discovered in myself in the reading a long-suppressed deep-seated reservoir of fetid masochism? Nah, I’m not that sorry a mess.


What saves Silverberg in my eyes, despite the information they convey, is the nature of the interviews. Billed as “conversations,” this is precisely how they come across. Zinos-Amaro, who started out similarly nerdlike as an SF aficionado, got hooked at seventeen while reading Silverberg’s 1968 multiple award-winning novella Nightwings (which I will download from Kindle soon as I finish this report). He says in the preface to Traveler of Worlds, “I was thrilled to realize that I had made first contact with a vast and cool intelligence, one that had spent decades producing enthralling stories now awaiting my discovery. I immediately hunted down as many Silverberg books as I could find, reading perhaps fifty over the next two years. It was a bibliophilic infatuation of the first order.”


Zinos-Amaro says his interest in Silverberg the man grew along with his fascination by the author’s work. They eventually became friends, collaborating on an SF novella, When the Blue Shift Comes, and, last year, holding the conversations contained in Traveler. For me the relaxed, friendly tone of Traveler lifts it far above the usual interview format pairing celebrity and questioner. Traveler of Worlds is truly an extended conversation. I felt like an eavesdropper, and I feel good about it. And I’ve been soundly, and properly, humbled.