I’ve never liked coming-of-age novels. Not sure why. Maybe because I was coming of age myself when I tried those that I tried. I was probably pre-high school when the first one I remember, Catcher in the Rye, appeared on my radar. I might have read it. I know I read some of it. I recall not liking the snarky voice nor empathizing with Holden Caulfield. 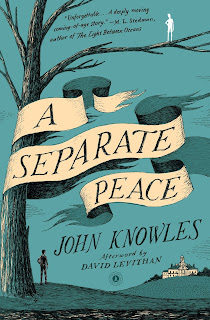 I might have felt he was so cool I could not identify with him. A few times in later years I considered reading it to see if I might respond differently. Haven’t done it, yet.

Then came The Adventures of Augie March, assigned in my freshman English class at U. of Wis. Hated it, narrator way too smart for me, reminded me painfully of my Midwest smalltown hickness. Haven’t tried it again, although recently I’ve read Bellow’s more mature work and liked it despite its informing me my hickness, alas, will be evident to anyone who cares to look for it as long as I live. But I believe it also helped me reach a sort of peace with it--oy, what a clever aging boyhick am I!
A Separate Peace. I doubt I would have liked it had I tried to read it nearer the time it was published, 1959. For one, its language was too fine, too nuanced for my callow hickness. Nor would I have had the incentive of the publicity blast Catcher caught eight years earlier with its catchy (groan) title and forbidden-fruit flavor aimed at rebellion-itching adolescents. I’d seen references to it over the years, always with praise if not outright awe, and believe I might have bought a copy awhile back--quite awhile back--intending to pursue the promised enlightenment. I did pursue enlightenment during those days, and continue to pursue it (and hope to chase it to the end of my cognizance), but somehow neglected to seek it in John Knowles’s debut and universally acclaimed coming-of-age novel. The “coming-of-age” aspect might have been off-putting had I known of it. I realize now I had no idea at all what A Separate Peace was about.
I read it last week on the trusted recommendation of my literary adviser, the Fictionaut poet Kitty Boots, and I can say with unequivocal enthusiasm her record with me stands intact. So I bought the Kindle version, and right off felt vindicated for my Catcher distaste by this endorsement from the British newspaper The Independent:

“A coming-of-age tale set in a New England boarding school, it bears immediate comparison to its better known contemporary The Catcher in the Rye but is an altogether gentler, more quietly brilliant book. . . . Reading this novel will feel like unearthing a forgotten gem.”

So I scrolled down to the first paragraph:

I went back to the Devon School not long ago, and found it looking oddly newer than when I was a student there fifteen years before. It seemed more sedate than I remembered it, more perpendicular and strait-laced, with narrower windows and shinier woodwork, as though a coat of varnish had been put over everything for better preservation. But, of course, fifteen years before there had been a war going on.

Hooked. Right at the git-go. The low-key, careful mix of memory and observation easing me into a narrative I still had little idea where it would lead. Two paragraphs down some gentle intimation of dread ahead:

Preserved along with it, like stale air in an unopened room, was the well known fear which had surrounded and filled those days, so much of it that I hadn’t even known it was there. Because, unfamiliar with the absence of fear and what that was like, I had not been able to identify its presence.
Looking back now across fifteen years, I could see with great clarity the fear I had lived in, which must mean that in the interval I had succeeded in a very important undertaking: I must have made my escape from it.
I felt fear’s echo, and along with that I felt the unhinged, uncontrollable joy which had been its accompaniment and opposite face, joy which had broken out sometimes in those days like Northern Lights across black sky.

At this point I was a captive of the Kindle app on my laptop, interrupted only by breaks for eating and using the—as Knowles presumably would have written—facilities. There’s a ‘50s gentility in his language, despite it’s near-decade gain on Catcher with its brat vernacular, somewhat shocking as I recall, in its day. 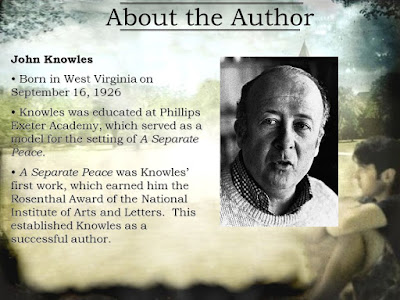 Knowles used language to conjure atmosphere, its nuances of beauty, dread, joy, and subtler, more civil irreverence than Caulfield’s. As to beauty, this scene took my breath with its quiet drama as well the incidental irony of reading it while getting snowed-in here in Hampton Roads, Virginia:

Not long afterward, early even for New Hampshire, snow came. It came theatrically, late one afternoon; I looked up from my desk and saw that suddenly there were big flakes twirling down into the quadrangle, settling on the carefully pruned shrubbery bordering the crosswalks, the three elms still holding many of their leaves, the still-green lawns. They gathered there thicker by the minute, like noiseless invaders conquering because they took possession so gently.

What am I forgetting? Oh! Of course! Plot, character, theme, that sort of thing! As we know, A Separate Peace was set against a background of World War II. Military thinking was influencing the school to arrange its priorities to prepare teenage boys for soldiering, toughen them up—bodies and spirit. The principle character, Finny, in one aspect is the ideal candidate. He’s far and away the toughest of heart, best leader, and best athlete on campus. Problem is, he’s the worst candidate temperamentally, taking great delight in disrespecting authority and breaking rules. Finny’s roommate and best friend is Gene, an introvert and the school’s best student, academically.

An odd couple. Their mutual devotion was one leap of faith I was never quite able to make. Much speculation has arisen over the years of a homoerotic thing between the two. For the record, there is no sex, described or implied, between or among any of the people in the novel. Noted gay author David Levithan (Boy Meets Boy) in a retrospective to the Kindle edition, quotes a comment by Knowles addressing this question in an interview twenty-eight years later: “Freud said any strong relationship between two men contains a homoerotic element. If so in this case, both characters are totally unaware of it. It would have changed everything, it wouldn’t have been the same story. In that time and place, my characters would have behaved totally differently. . . . If there had been homoeroticism between [Finny] and Gene, I would have put it in the book, I assure you. It simply wasn’t there.”

Levithan’s own reaction concurs with Knowles’s explanation, but he adds, “But when it comes to what the story means to me, so much of what Knowles writes gets to the heart of what it would have been like to be gay at that time— and what it can still be like to be gay now.”
Perhaps A Separate Peace tickled my Midwest smalltown prejudices a tad, keeping me from engaging fully in the special friendship of Finny and Gene. I did find the incident leading to the death of one of them the most realistically rooted in male competitiveness, from my experience.
As to theme, as it relates to the novel’s title, I have a quibble. This, from one of the two protagonists, would seem to sum it up: “I never killed anybody and I never developed an intense level of hatred for the enemy. Because my war ended before I ever put on a uniform; I was on active duty all my time at school; I killed my enemy there.”

The following quote from the book seems to challenge, I believe unintentionally, the previous notion, that one can kill the evil in one’s heart simply by understanding it. To me this quote is nearer the truth: “It seemed clear that wars were not made by generations and their special stupidities, but that wars were made instead by something ignorant in the human heart.”
Ignorant or malignant, take your pick. It can be tiny, almost unnoticeable, but no matter how seemingly insignificant or how eloquently one can rationalize its presence, it can sprout evil when the conditions are ripe, without a moment’s warning. It’s known in criminal law as “irresistible impulse.”
This was the unforgettable, horrifying lesson I took from A Separate Peace.