He finally had me at John Wayne Dahmer. Until then I was wavering between irritation at his excessive volubility, and admiration for his agility with language. I chuckled sporadically, silently, until I reached John Wayne Dahmer, whereupon I like to tore my larynx releasing to anyone who might have been nearby in my fairly civilized neighborhood a full-throated, barking hysteria I suspect had been building incrementally all the while. 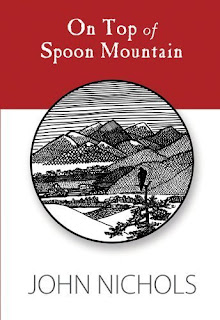 
The (black Persian tomcat), John Wayne Dahmer, always sleeps by the cash register and never wakes up. Shoppers pat him, scratch his ears, pull his tail, reach under and tickle his tummy, no reaction. He is a narcoleptic sphinx.


No? Well, I guess you had to be there in my living room with this jabberbox on the next bar stool telling you the nuttiest things about himself, his ex-wives, his girlfriends (current and ex), his weird kids, his guilt over neglecting his weird kids, the life-threatening problems with his finicky heart (technical terms I can’t pronounce) and his determination to climb Spoon Mountain (13,000 feet—one of the tallest in New Mexico) in two weeks on his sixty-fifth birthday with the two neglected (now adult) kids. When you hear him say the words “John Wayne Dahmer” something happens in the dynamic. Your resistance evaporates during the prolonged outburst of woofing and howling that threatens to provoke someone within earshot to dial 911.


Jonathan Kepler, as he introduced himself, was telling me all of this with a straight face---well, not completely straight. There seemed always to be a little smirk in the eyes and mouth. At first this smirkiness was one of the reasons I wanted to swat him off his stool, but then when he said the words “John Wayne Dahmer” and I laughed in spite of myself and looked in the bar mirror and saw I had something of the same smirk on my face, I knew at that moment I would leave my flyswatter on the bar, sit on my stool and hear this guy out, hear his whole damned screwball story, if I had to sit there until the bartender kicked us out. 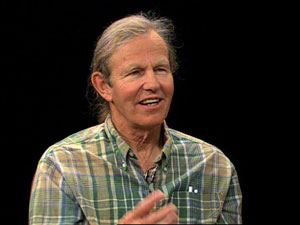 Somewhere along in here between when I wanted to swat the guy and smirkingly bought him a beer, I remembered that my literary adviser, the poet Kitty Boots, who introduced us, had whispered to me that “Jonathan Kepler” was known in a parallel life as John Nichols, author of The Milagro Beanfield War among other celebrated works of fiction, nonfiction, quasi-fiction, and quasi-nonfiction. This, of course, provoked in me an audible gasp. I had not known The Milagro Beanfield War was a book until after I saw the movie, which I had put off seeing for decades because the word “Milagro” intimidated me, spellingwise and pronunciationwise—someone had laughed at my attempt to pronounce it once, and my response was something like, Well, then to hell with it. Why should I waste my time watching some Miliguano Bean thing anyway (I think I voted for a Republican once or twice around that time)! Enlightenment came quite recently when Ms. Boots patiently taught me how to pronounce “Mil-a-gro” and lent me her DVD of the Robert Redford-produced movie. After I’d watched it, she took my enthusiastic response as license to rave about the book and its author, and kept finding opportunities to slip in little plugs for Mr. Nichols until eventually (last week) she handed me a printout she’d made from Nichols’s online book site hawking On Top of Spoon Mountain and I realized of a sudden if I wanted to keep her as my personal literary adviser I’d damned well better invite this Jonathan Kepler character into my apartment and find out (thank you, J.J. Cale) what it was all about.


I am now yugely glad I did. (I hate cutesy word bastardizations like “yugely” but in the interest of social progress I am reaching deep for Gen-X readers, assuming they exist outside the graphic novel section. Therefore, as Jonathan Kepler’s precocious daughter might say—to me and to you--get used to it. Older readers seeking definitions of quirky word forms such as “yugely” are advised to Google them with the qualifier “urban dictionary.”)


Where the hell were we? I’ve gotten us hopelessly lost...oh, yeah. Once I got it through my erstwhile Republican-voting head (I’m simply appalled at the recollection, for the record) that the jabberwocky dude on the stool next to me was only a character in a book by the author of The Mil-a-gro Bean War, which became the Robert Redford movie my professed liking of which (I actually loved it, but us guys—I know, “we” to the grammarati amongst us--really hate to use the word “love” except for...but that’s another story) quite plausibly saved my strictly literary relationship with my admittedly stunning adviser, I decided then and there to hear what Kepler had to say, all the way, then write this report in a way that tried to reflect the brilliantly zany, quasi-apocryphal style of the Spoon book, and then to read, with anticipation of great joy and illuminating transcendence, the Bean book. And then, very likely, to devour Nichols’s first novel, which also became a celebrated movie (which I may eventually see), The Sterile Cuckoo.


What! You think this report will piss Nichols off so bad he’ll hunt me down and slap the bejeebies out of me? Really? Well, I don’t think so. Here’s how he pokes fun at himself in Spoon through his character Kepler recounting bad reviews some of his fictitious novels (which sound very familiar in a John Nichols sort of way) received from reputable publications (used fictitiously presumably):


More pejoratives coined by the literary assassins have credited me with writing “pseudoradical puerility” and “infantile analysis.” My later work has never lacked for defamatory reviews. Harper’s once accused me of “Pandering to the gross tastes of drunken fraternity boys.” Memorably, the Anniston (Alabama) Star called my last novel, “A feast for sore anuses.”


Do you suppose the fictitious Jonathan Kepler hunted down those fictitious reviewers and slapped the bejeebies out of them? Like you’re wondering if Nichols will do to me? Oh good grief, gentle reader, don’t be naïve! Of course I’m safe! I would never use the word anus—singular or plural—in anything except an unquestionably restricted satirical setting. Besides, I don’t do satire anymore. Canned laughter these days. All I aim for. I mean, who can compete with John Wayne Dahmer? Then again you never know with Nichols. He blessed the wedding of a friend by reading aloud the Edward Abbey poem, “Benedicto”, which includes the line, “May your path be windy and treacherous/may lightning be around every corner…” You see, as Nichols sees it (from what I now know of him) this is a call to adventure, without which life would be dreary indeed. In On Top of Spoon Mountain he put it this way:


Sometimes you have to seize the day before the opportunity dissolves... otherwise, heaven forbid, you might wind up pampered and comfortable and well fed during your golden years safely ensconced in the bosom of your family, all of whose members respect you and kowtow to your every aging need and whim with ultra-solicitous tenderness and boundless adoration. And what sort of lily-livered Lilliputian desires a fairy-tale ending like that?


This is a rumination he has with himself in the most hilarious, most heart-rending scene in On Top of Spoon Mountain. It takes place in Jonathan Kepler’s hideous mess of a kitchen on the eve of his sixty-fifth birthday, which is also the eve of his determined climb of Spoon Mountain with his son and daughter, who are trying with superhuman vehemence to talk him out of. The participants besides Kepler are the son and daughter, the son’s anal-retentive girlfriend and their obnoxious dog Cujo, the daughter’s reasonable, likeable husband, and their precocious seven-year-old daughter. (Kepler’s two cats are ensconced in their favorite hiding nook, the bedroom closet.) The scene occupies an entire chapter: 28, should you wish to skip to that to get your adrenalin pumping. I promise you—hand over heart--this scene is 10,053 times funnier than the “Scheisskopf, you shithead, is that your foot I’m stepping on?” scene in Catch-22. It’s also 10,102 times more rending of heart than the lady spider’s demise in Charlotte’s Web (the only time I ever saw tears streaming down my daughter’s face). Go figure. Here’s a tiny sampling:


Miranda (Kepler’s sharp-tongued daughter) to her ordinarily taciturn brother, Ben: “Nobody on earth has been less ‘reasonable’ and less ‘responsible’ than our father. So don’t you hand me that bogus ‘prima donna’ crap. He is totally inept in real life because he has been trapped in his little-boy imagination from the git-go and he doesn’t know how to escape from the spell of his own looking glass. And now, apparently, he is eager to sodomize himself, and therefore the rest of us, by climbing a thirteener alone tomorrow with a broken nose, a broken arm, a black eye, a potbelly, and a serious heart condition.”


Believe I was so dumbstruck during this passage I forgot to laugh, altho I probly felt a lump in my throat. Here’s Miranda again, laying some more sisterly thoughts on Ben (the “Jamie” in the last line is Ben’s girlfriend):


Ben, you slump around like a mute with your silent-waters-run-deep persona hoping to ingratiate yourself with our so-called father to gain his love and approbation but I have news for you, kiddo— lots of luck. When are you ever going to grow up and realize our so-called father is a charlatan, a burned-out scoundrel, a con man, a fuddy-duddy, an imposter, a phony lefty, a serial gigolo and a—”


I jumped to my feet bawling, “Get out of here, Miranda, I’m sick of your shit!”


“Gladly!” she yelled back at me. “It’s about fucking time!”


Cujo yowled until Jamie ordered “Be quiet!” so loudly the dog cowered, belly against the floor.


And finally (I know you want more, much more, but I must cut it off. Nothing personal. It’s just that this report has gotten waaay out of control and is waaay too long), Kepler’s granddaughter, Lizzy, weighs in with a fervid defense of the man who taught her how to talk with ravens in their own language. And it helps to know that Lizzy’s parents are rabid Steelers fans:


“I hate the Pittsburgh Steelers!”


(I especially enjoyed that last, as I can recall actually sitting just above the frozen tundra of Lambeau Field’s 50-yard-line when Paul Vernon Hornung scored one of the last touchdowns of his sensational golden career—against the Giants that afternoon, but nonetheless, Lizzy, I’m with you.)


One last thing before I hit the save key—promise!--and send this bad boy off to the vicious editors. It’s a question. This: So do Kepler and his squabbling offspring end up on top of Old Spoonie, redeemed, hunky-dorried, and singing “The Hills are Alive With the Sound of Music?” What the hell kind of Pollyanna two-shoes do you take me for?
IT’S IN THE BOOK!