EMOTION AS MEANING: The Literary Case for How We Imagine – Keith M. Opdahl

My recurring nightmares about college seem to be tapering off—even the most frequent and most lucid one. It involves the only class I ever dropped. I was a third-semester sophomore at the U. of Wis., freshly released from the Army and eager to redeem the academic shame I’d brought upon myself and my parents four years prior by flunking out three times. 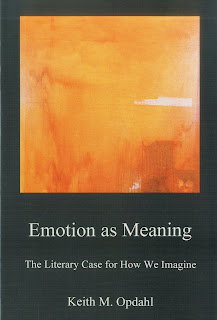 I’m the only character in this dream. I’m wandering alone on campus worrying that I might have forgotten to officially drop the course, which I imagine will destroy any chance I might have of ending up some day with a decent GPA. Problem is, I can’t find the place where the records are kept, where maybe I can clear up what at the moment is the biggest worry of my life. All the while I’m thinking maybe I can still officially drop out before it’s too late, or, if not, return to the class and try to catch up from where I’d left off. I’ve not yet awakened screaming from this dream, but I’m always relieved when consciousness returns to banish the imaginary long ago dread, at least for the moment.


Were there another character in the dream it would be Opdahl, instructor of the tormenting class, which was also the only writing class I’ve ever tried to take. Despite its fraction of a flicker on the timeline of my conscious memory, I could take you to the exact spot—at a crosswalk on Bascom Hill--where Opdahl and I met by chance half a century ago within an hour or so after that illusion-dashing session. Then, with what I took to be casual disgust at a piece I’d turned in, he had critically wounded the aspiration that prompted me to enroll in his course. It was the first assignment he’d given us. It was either the first or second time that term the class had met. He’d wanted a page or two devoted to describing someone, anyone.


I knew most if not all of the others would do the lips like squirming worms, eyebrows arching lewdly toward the rafters, nose not even a mother could love…what I’d assumed was the usual sort of literary thing. I knew this from hearing their coded bragging after Opdahl’d introduced himself. Things like “Can we get credit for stories we’ve published,” delivered in confident, sophisticated voices intended to impress Opdahl while collaterally intimidating smalltown hicks like me. It worked, at least on me, the first step toward the door of no return.


At some point while coming of age I developed an iconoclastic nature. Not sure how this came about. I’ve never considered myself a smartass, and my approach to Opdahl’s assignment most definitely was not intentionally disrespectful. From the vantage of retrospect I wonder now if he took it as some sort of cocky, deferred rejoinder to the “published” students’ challenge. He had no way of knowing I’d never been a gamer, unless you count the passive aggressiveness I learned watching the family cat lure the family dog to a blitz-clawed nose surprise. And maybe that is what I was doing, or trying to do: while all the “smart” kids went one way I’d sneak around behind the target and surprise everyone. If that’s what I was thinking to do I failed, miserably, explaining during our brief meeting on Bascom Hill what I felt was an ingenious approach to his assignment. He didn’t bother trying to see it that way, although I like to think a fortuitous seed might have embedded itself in his mind at that very moment.


The only words I recall verbatim during our miniscule conversation--both spoken by me--were “Mr. Opdahl” and “Mathew Paust.” I remember making an effort to articulate that my intention with the assignment was, instead of describing graphically someone’s physical features, to suggest a sense of the person by his actions, the way he walked, moved, what he did with his hands, that sort of thing. I have precious little recollection of what I did write. I remember feeling this cross-walk talk was a final appeal of sorts, and that Opdahl was the appellate judge. My impression of his response is that he regarded me in the same vein he might have someone trying to panhandle or hand him a religious tract. He brushed me off like a fleck of dandruff from his collar. I never saw him again.


To be fair, I know now my mastery of the writing craft was barely incipient, and that one of the aspects of developing as a writer is to be able to create a detailed picture with words, using such tools as metaphor and simile—squirming-worm lips, rafter-reaching eyebrows--just as a graphic artist must master basic drawing skills before progressing to abstractions. I might well have been trying to skate around my inexperience, and Opdahl might well have seen this plainly. If this were so, I can say now, with no malice, he might have tried a little harder to be a better teacher.


I pretty much forgot about him over the years, to the extent he never appeared in my recurring nightmare about his class. His unusual name did stick in my craw, though, so that it about choked me a year ago while I was reading a collection of Saul Bellow’s letters, edited by Benjamin Taylor. One of Bellows’s letters was addressed to “Keith Opdahl,” who, I quickly learned, had authored The Novels of Saul Bellow: An Introduction. A bit of Googling followed, which assured me the late Keith Opdahl had indeed taught writing at U. of Wis., from 1961-67. My searching also turned up another book he’d written, Emotions as Meaning: The Literary Case for How We Imagine. Were I French, or the kind of dilettante to affect worldly chic with occasional French expressions, I might have shouted “Sacre Bleue!” or “voila!” Instead, alone in the apartment, I most likely gaped and wondered if my suddenly noticeable pulse was throbbing from excitement or from the midday Ritalin kick.


Bought the book, struggled diligently through the academic linguistic abatises and felt my suspicion blossom into unmitigated certainty that either my unacceptable paper of yore or my fumbling explanation on Bascom Hill had unimaginably sparked alive a worm of interest in Opdahl that grew over the decades into his theory that provoking a reader’s imagination is an essential element of the literary author’s craft. Were I of a litigious bent and had he not died on New Year’s Eve three years prior, I just might have...oh, non, mais j’arrive pas!


At this late date I’m quite content to enjoy the irony and a certain sense of vindication.


In his book Opdahl employs several literary classics in examining his theory. He starts out with a single paragraph from Ernest Hemingway’s story Big Two-Hearted River:

Nick drove another big nail and hung up the bucket full of water. He dipped the coffee pot half full, put some more chips under the grill onto the fire and put the pot oil. He could not remember which way he made coffee. He could remember an argument about it with Hopkins, but not which side he had taken. He decided to bring it to a boil. He remembered now that was Hopkins's way. He had once argued about everything with Hopkins. While he waited for the coffee to boil, he opened a small can of apricots. He liked to open cans. He emptied the can of apricots out into a tin cup. While he watched the coffee on the fire, he drank the Juice syrup of the apricots, carefully at first to keep from spilling, then meditatively, sucking the apricots down. They were better than fresh apricots.

“We do not simply translate Hemingway’s words into ideas,” Opdahl says. “Instead we embody the meaning we read, constructing a model of the author’s world so tangible that we can imaginatively enter it...when we look closely at Hemingway’s prose, we discover that he leaves out a great deal.


“Do we...know what Nick looks like or where he positions himself? Do we know what kind of opener he uses? Does he brace the can on his knee or work between outstretched legs? Hemingway does not tell us.”


“Big Two-Hearted River” was published in Hemingway’s collection of stories titled In Our Time sixteen years before I was born. Even a smalltown hick like me with the vaguest literary ambitions should be familiar with those stories, if not all of Hemingway’s work, by the time he or she sits down in a college writing class. I had read several of Hemingway’s novels, but not his stories. I had read him mainly for atmosphere, wasn't looking for fine points of craft. In fact, I barely had any concept of craft at the time, and no doubt this omission—this gross ignorance—came through with herald-trumpet clarity in my attempt to try “something different” in Opdahl’s class.


It is to weep (to bastardize Leonato’s comment in “Much Ado About Nothing”). To weep for my embarrassingly callow younger self. To weep for a man with a brilliant academic mind who lacked the chops for teaching when it mattered most to at least one student. To weep for joy time and accidental coincidence at last managed to breach that unimagined gap.