GIVE US A KISS – Daniel Woodrell v. THE STORIES OF BREECE D'J PANCAKE

My intention initially for this space was to present an argument solving the 38-year-old mystery of Breece D'J Pancake's suicide. I came to my senses soon after an awkward start when the understanding grabbed hold that anyone pursuing so asinine a conceit could have doctorates in psychology, philosophy, sociology, anthropology, and biology, tied together with the intuition of a Gypsy seer, and still be left drooling on the keyboard and not an inkling closer to the answer than anyone save perhaps the Catholic god Pancake professed belief in could reasonably expect to get.
Further complicating my pretension was a minuscule familiarity with modern noir. Life itself being fraught with dark dead-ends, I've tended more and more to avoid their reminders in literature. No matter how artfully presented. And yet here I am, lost in a rabbit hole at what might well be the very bottom of such despair, so bleak even the genius who captured it for us evidently couldn't endure. So concludes Samantha Hunt in her excellent retrospective for The Believer:
On April 8, 1979, just shy of his twenty-seventh birthday, Pancake sat on a folding chair beneath a blossoming fruit tree. He placed a gun inside his mouth and pulled the trigger. He became a victim of the depths his own stories plumbed. Mrs. Helen Pancake, in a letter to James Alan McPherson, one of Breeceʼs professors and friends at UVA, says, “God called him home because he saw too much dishonesty and evil in this world and he couldnʼt cope.” Pancake distilled the power of sadness like moonshine, extracting the most potent drops for his stories, sending it like a hard pinch to a numb world that [thirty-eight] years after his death has yet to awaken.
For me the descent began as a classic seduction, Jennifer Lawrence being the seducer in her gutsy breakout Winter's Bone role set in a violent hardscrabble Ozark Mountains community seemingly overrun with drug dealers, drug users, hungry hawgs, hungry houndawgs and hungry young'uns. I wouldn't have paused more than ten seconds passing through the TV room the night the kids were watching it had I not been startled by the arresting voice and screen presence of Ms. Lawrence. I stayed and watched to the end. Years later I purchased a used DVD for two bucks. I let it sit for a couple of months until mid-January when my mood felt solid enough to handle what I assumed would be a downer, even with Jennifer Lawrence to brighten the gloom. 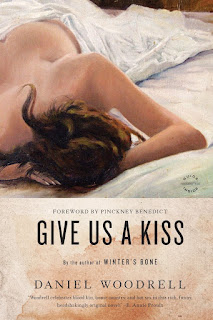 The film not only was not as depressing as I'd assumed, it was so engaging I decided I might like to read the novel. Its author, Daniel Woodrell, was unknown to me, but Fictionaut's Kitty Boots said she liked his work, and I trust her taste. I looked up Woodrell's oeuvre. Rather than read Winter's Bone, though, I decided instead to try one that promised to be a tad lighter in tone. Give Us a Kiss is set in the same Missouri Ozark county as Bone and features two feuding families, one I recognized from the movie.
Give Us a Kiss is a riot, a hoot, an enjoyable romp, but with one factual stumble that splashed icewater on the sense of authenticity I'd felt watching Winter's Bone and which was promised in the foreword by Pinckney Benedict, another reputed “hillbilly” author. A discussion by Kiss's main characters about growing marijuana is so laughably wrong in its details I thought at first maybe it was intentional, simply part of the already unpredictably cockeyed plot. When it became clear the mistake was Woodrell's, despite the intelligent writing, fascinating characters and engaging story, my confidence in his narrative authority faltered. I decided that instead of reading more Woodrell I would check out another unfamiliar but unforgettable name mentioned in the foreword: Breece D'J Pancake, whom Benedict calls “the patron saint of modern hillbilly fiction.” 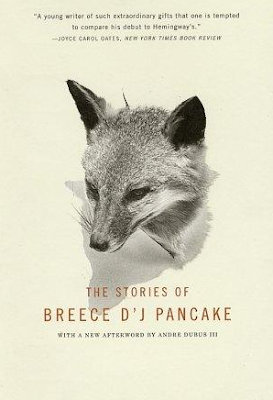 So here I was, one foot curiosity's already tugged into the rabbit hole. The name. The middle initials separated by an apostrophe. Stood out, you know? I Googled it, learned of the suicide. I learned the apostrophe was a typo in the galleys of “Trilobites”, Pancake's first story published by The Atlantic. I learned Pancake laughed when he saw it and let it stand as a unique sort of nom de plume. I laughed when I read that, and immediately accepted Breece D'J Pancake into my exclusive pantheon of memorable characters. I found his book, The Stories of Breece D'J Pancake, which came out four years after his death.
My first brush with the dozen stories was superficial. I knew they were highly regarded, but the writing was too complex for me to fully appreciate—multi-layered stream-of-consciousness with obscure idiom and dialect. Turtles are “turkles”, which, when I first encountered the word, I thought my glasses were failing. Now, though, I've been calling turtles “turkles” for esoteric kicks, and might well do so indefinitely. But it took a second reading for me to appreciate each individual drop of the 100-year-old bourbon I'd thoughtlessly drunk mixed with cola the first go-round. Here's a jigger of the pure stuff, the opening paragraph of “Trilobites”, regarded by connoisseurs as Pancake's finest:
I OPEN the truck’s door, step onto the brick side street. I look at Company Hill again, all sort of worn down and round. A long time ago it was real craggy and stood like an island in the Teays River. It took over a million years to make that smooth little hill, and I’ve looked all over it for trilobites. I think how it has always been there and always will be, at least for as long as it matters. The air is smoky with summertime. A bunch of starlings swim over me. I was born in this country and I have never very much wanted to leave. I remember Pop’s dead eyes looking at me. They were real dry, and that took something out of me. I shut the door, head for the café.
The distance I traveled between regarding “Trilobites” as weird but those who know say it's good so I'll keep reading and maybe some of it will sink in to where I am now, savoring the masterfully compressed layers of time, memory, aspiration, sadness, grief, anger, astounding detail—for starters--was a college course worth of study lovingly compressed into forewords and afterwords to the story collection, Samantha Hunt's exceptional piece, and the biography by Thomas E. Douglas, A Room Forever: The Life, Work, and Letters of Breece D'J Pancake. 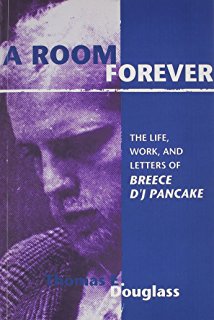 Had I not already been completely down the Pancake rabbit hole by the time I read Hunt's piece, “The Secret Handshake,” I might have decided to pull that first leg out and scramble back to sunnier climes, and written this report on Give Us a Kiss alone. But at the late stage I'd reached when I found it, her piece provided all the more appreciation for Pancake's painstaking work:
Pancakeʼs book is at times so depressing, his characters so destructive and melancholy, that they attract readers the way a dark and stormy tough guy, a rebel without a cause, might attract a young woman. But there's a purpose to these blues. Under the banner of melancholy, Pancakeʼs stories act as road maps to the disasters that the oppression of poverty can wreak on a life. He is a black shadow of political songwriters like his hero Phil Ochs (“I wonʼt be laughing at the lies when Iʼm gone”) and Woodie Guthrie; of old-school agitators like Joe Hill and Frank Little—union outsiders brought in to encourage pro-labor sentiment, men who sometimes had more education than the miners they were there to help, men who stuck out, and so, too often, got shot down. Pancake is a lot like these men—only his way to stir people up starts by bringing them down to see what hard times really look like.
As Hunt concludes, and others who knew him agree, Pancake's extraordinary capacity for empathy apparently cost him dearly for the effort. They say his unpredictable, moody personality and the strange letters from him near the end of his life in retrospect seem veiled goodbyes. Oddly, little is said about his rebuffed marriage proposal to a girlfriend whose parents discouraged the match. And yet, one must wonder at the implications in this “Trilobites” passage that emerges seemingly out of nowhere and returns from whence it came:
“That’s right,” she says, and watches the cars roll by. “Shot her in Chicago. Shot hisself too.”
I look beyond the hills and time. There is red hair clouding the pillow, blood-splattered by the slug. Another body lies rumpled and warm at the bed foot.
“Folks said he done it cause she wouldn’t marry him. Found two weddin’ bands in his pocket. Feisty little I-taliun.”
I see police and reporters in the tiny room. Mumbles spill into the hallway, but nobody really looks at the dead woman’s face.
“Well,” Mom says, “at least they was still wearin’ their clothes.”
At the time he took his own life Pancake was working on a novel and was winning critical acclaim and getting offers from publishers. Can't help but wonder what failed him. Can't help but wonder if his Catholic god was in some kind of snit when whatever demons held his finger on that trigger that terrible day in Charlottesville. Can't help but wonder why.