MURDER IN THE WINGS -- Ed Gorman

Were I Police Detective Edelman and I had the faded TV star Stephen Wade in my custody I'd lock him up, close the case and take a long, well-deserved vacation. This is one murder rap not even my buddy Jack Dwyer--former cop, now private eye and sometime actor—is going to upend, believe me. 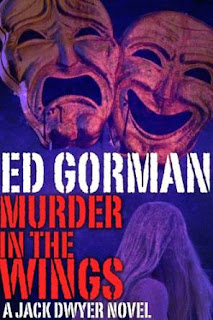 I mean, look. Let's be realistic here. Wade's fingerprints are all over the knife that's buried in Michael Reeves's back. Okay? Need more? Opportunity: A reliable witness sees Wade enter Reeves's apartment around the time of the murder. Motive? Hours earlier Reeves had shoved, slapped and humiliated Wade in front of the rest of the cast of O'Neill's Long Day's Journey Into Night following Wade's drunken bumbling, stumbling, mumbling performance. Reeves directed the production and is the local theater's resident director.


One might think even Jack Dwyer would let this one go, especially considering the victim was not a likable guy. Somewhat of a loathsome guy, actually. The kind of guy who probably had it coming anyway. But, then, Jack Dwyer's not the kind of guy who gives up easily. Not the kind, either, to rush to judgment, no matter how loathsome it might be to keep an open mind.


One suspects Ed Gorman was a Dwyer kind of guy. He created Jack Dwyer and used this quote by the late British author Gerald Kersh to introduce Murder in the Wings, our currently discussed Dwyer mystery: ". . . there are men whom one hates until a certain moment when one sees, through a chink in their armor, the writhing of something nailed down and in torment." 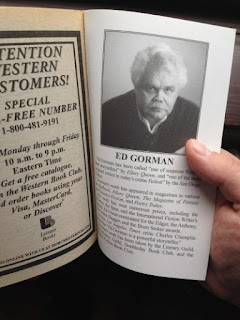 In Murder in the Wings, Jack Dwyer neither hates the man charged with murder nor has to look for any chinks in his armor. There is no armor. Stephen Wade is himself writhing in torment, destroying his career and his life with drink. He is also Dwyer's friend. Dwyer was one of the cast members in this disastrous performance of O'Neill's classic play. He restrained the actor after a fight broke out between the two enraged men. It was Dwyer whom Wade called, in a drunken stupor, from Reeves's apartment where he said he found his tormentor lying face down in bed with a knife protruding between his shoulder blades.


Nope. No way Jack Dwyer is going to let this one go. Not even after Wade admits he isn't positive he didn't stab the loathsome director to death. Not even after he waves a .45 at Dwyer and flees sobbing into the night. Dwyer couldn't let this one go if he wanted to, if only because his lovably flaky girlfriend, Donna Harris, has decided that “sweet” Stephen Wade did not—could not—murder anyone, not even someone as loathsome as Michael Reeves.


Besides, taking a closer look one sees there are plenty of folks, in the theater group alone, with motive, opportunity and means to have done the dirty deed.


Ed Gorman was at the top of his game with this novel. The writing is crisp and insightful, with moments of pure poetic joy. His characters are so real you feel you know them, or would like to. His plotting is intricate and daring. He keeps you guessing right up to the eminently satisfying denouement.


And the humor. Oh, mercy. It sneaks up and gooses you when you least expect it. There seems always to be a scene or two in every Gorman novel that sets me to laughing so hard I worry I will not be able to stop. Or that the neighbors will call 911. This time, about halfway through Murder in the Wings, I grabbed my cell phone thinking I might need to make the call myself.


Turns out I didn't. But I was ready.