I'm finding myself more and more fascinated with history the older I get. Maybe part of the fascination has to do with the fact that events I lived through, heard on the news, read in the newspaper or saw with my own eyes, have since become history. Looking at what is now history that was once part of my life gives my imagination a boost to move further back, to see events before my time differently than I saw them when I studied history in school. The context of living extends perspective in a way that reading about events as an inexperienced youngster never could. 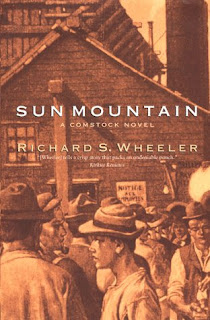 Now, if the histories had been written by Richard Wheeler it might have been different. A masterful writer of historical fiction, Wheeler creates an illusion for the reader to feel he or she is in fact viewing events as they happened. The period in Sun Mountain was the last third of the 19th century during the silver/gold mining boom and bust of Virginia City, Nevada.
The novel unfolds as the memoir of a fictional character—Henry Stoddard—but involves many actual people, including the young Samuel Clemens and other newsmen at the Territorial Enterprise. The newspaper gave Stoddard, one of its reporters, an ideal platform to observe the wild and fascinating milieu and personalities of the mining community made famous worldwide as The Comstock Lode.

With this highly personalized device Wheeler spoons out his vast knowledge of the mining industry, the customs of the day and events great and small, locally, regionally and beyond in such vivid detail he held me spellbound throughout the story.

Had Sun Mountain been part of a course when I was in high school or even college I might have become a history buff much much sooner.