MAGGIE: A Girl of the Streets – Stephen Crane

With no knowledge the expression gadzooks did or did not exist in the latter part of the 19th century I presume here to employ the aforementioned expletive to burst forth with appalled astonishment from the throat of Rupert, our imaginary reader at the imaginary distinguished Manhattan publishing house Lyttel, Pettibone & Throckhauptman, as he begins reading the manuscript of a short novel by one historically accurate Johnston Smith. 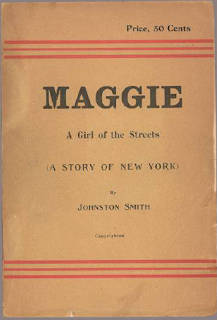 Rupert’s outburst coincides with his hurling of the manuscript across the room he shares with three other readers of what one day would come to be known as slushpile submissions, most of which were returned to their authors with notes of polite rejection. Our historically accurate manuscript is thusly returned after Rupert composes himself and sheepishly gathers up the sheets from the floor to stuff into the self-addressed-stamped envelope its author had enclosed with his submission. Doing so, Rupert notices the name on the return envelope is not Johnston Smith. Rupert shrugs, assuming the name is that of Smith’s agent, pastes the flap shut and drops the envelope into the outgoing basket on his desk. He pauses for a moment before releasing the envelope and wonders why he does not recognize the "agent"’s name: Stephen Crane. Rupert and the other New York publishers who rejected Maggie: A Girl of the Streets wouldn’t have this problem two years later when Crane dropped the pseudonym for his second novel, The Red Badge of Courage. Then any vocal sounds they might have produced likely would have been expressions of dismay for having rejected Maggie.
Frustrated by his failure to find a publisher for Maggie, Crane went the self-pub route, spending nearly $900 to have 1,100 copies printed. Reflecting back on this venture he was quoted as saying, "how I looked forward to publication and pictured the sensation I thought it would make. It fell flat. Nobody seemed to notice it or care for it... Poor Maggie! She was one of my first loves." 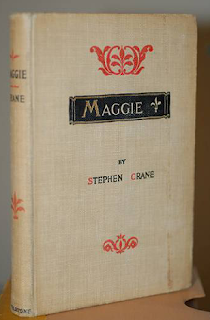 Of course once Red Badge was a hit, critics took another look at Maggie, and, voila!!!, declared it a work of cutting edge naturalistic/realistic brilliance. Uh huh. A real publisher even came out with a new edition, dropping the pseudonym and emblazoning Crane’s name on the cover! To be truthful here, rather than simply snarky, the publishers who rejected Maggie the first time, felt the theme of a girl raised in poverty in a Bowery tenement who turns to prostitution was a tad risque for the popular market. Some also objected to Crane’s meticulous transcription of the Bowery dialect, something other critics praised it for. I found it difficult and unnecessary beyond a little taste initially to get the Bowery voice into the reader’s head before switching to more comprehensible English. Here’s an example:

Pete made a furious gesture. “Git outa here now, an’ don’ make no trouble. See? Youse fellers er lookin’ fer a scrap an’ it’s damn likely yeh’ll fin’ one if yeh keeps on shootin’ off yer mout’s. I know yehs! See? I kin lick better men dan yehs ever saw in yer lifes. Dat’s right! See? Don’ pick me up fer no stuff er yeh might be jolted out in deh street before yeh knows where yeh is. When I comes from behind dis bar, I t’rows yehs bote inteh deh street. See?”

There are patches of overwriting that would have had me shouting gadzooks and hurling the manuscript across the room. I won’t include a sampling here as a gesture of respect for my readers. But then there are gems like this:

The air in the collar and cuff establishment strangled her. She knew she was gradually and surely shriveling in the hot, stuffy room. The begrimed windows rattled incessantly from the passing of elevated trains. The place was filled with a whirl of noises and odors.
She wondered as she regarded some of the grizzled women in the room, mere mechanical contrivances sewing seams and grinding out, with heads bended over their work, tales of imagined or real girlhood happiness, past drunks, the baby at home, and unpaid wages. She speculated how long her youth would endure. She began to see the bloom upon her cheeks as valuable.
She imagined herself, in an exasperating future, as a scrawny woman with an eternal grievance.

I did a double-take and then emitted a sardonic chuckle when I finally recognized that Chapter XVII was breaking the proverbial fourth wall this way: “Upon a wet evening, several months after the last chapter, two interminable rows of cars, pulled by slipping horses, jangled along a prominent side-street.” 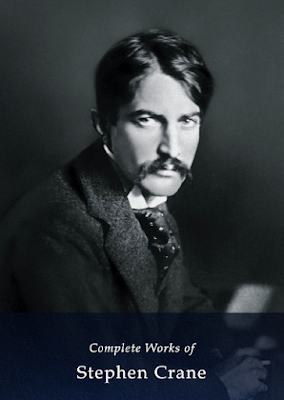 As one might expect, the naturalistic realism of Maggie is not remotely upbeat and ends on a note so gloomy the movie version, were there ever to be one, likely would use Beethoven’s Funeral March as a background accompaniment.
Can I in good faith recommend Maggie: A Girl of the Streets as “a good read?” No, I can’t and I shan’t. But anyone interested in the seminal work of a genius should find it informing as well as a solid study of Bowery lingo that might some day come in handy should one find oneself stranded in “Rum Alley” or “Devil’s Row” and need directions.
My copy of Maggie is included in the Karpathos complete works of Crane, on Kindle for 99 cents. I shall revisit The Red Badge of Courage soon to see if it holds up to my first reading of it as a youngster.