MIDNIGHT IN THE GARDEN OF GOOD AND EVIL – John Berendt

Roger Ebert surprised and annoyed me with his review of the movie version, grumbling that it didn’t do justice to John Berendt’s book version of Midnight in the Garden of Good and Evil. Rarely one to compare with expectations the two forms, I saw no point in this instance. And this was before I read the book. I thought I had read it right after I saw the movie when it came out in 1997. Turns out I hadn’t—I bought the book and maybe started it, but now, after reading it over the weekend, I know I had not. Despite going ass backward with the sequence of versions, I still do not share Ebert’s umbrage. 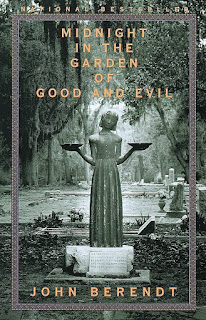 I agree the movie took liberties with the book, but Berendt acknowledged in a 2015 interview he took liberties, too: “The only thing I moved around was my appearance on the scene. Clearly Danny Hansford had already been killed when I got to Savannah. Everybody knew that. I wasn't trying to pull the wool over anyone's eyes. When I sat down to write the story I had been there awhile. Jim was already out of jail and acquitted.”
What strikes me as a tad ironic about Ebert’s comparison was his reliance on the power of imagination. A renowned film critic who understood the sometimes magical authority of the silver screen to seize control of viewers’ fancy and bring them into the mood and hearts of the characters, Ebert found he preferred the subtler involvement of the book. The film, he said, “is a determined attempt to be faithful to the book's spirit, but something ineffable is lost just by turning on the camera: Nothing we see can be as amazing as what we've imagined.” I disagree. If nothing else, the movie is what made me want to read the book.
As to structure, Ebert sounds almost offended that the movie used a substitute for Berendt’s first-person narration, introducing a character nowhere to be found in the book. Ebert never suggested voice-over, which would appear to be the only alternative and is a device yawned at by the hipper film aficionados. Nor did he quibble with John Cusack’s performance in this role as the writer visiting Savannah and through whose eyes we meet the characters and curious ambience of their milieu. Ebert said Cusack’s role might have worked had his character been as quirky and nutty as the others. I find that idea quirky. Cusack’s character served as straight man, someone with whom I could identify without worrying I might exit the theater, go straight home and attach strings to flies and tape them to my shirt and walk around town with the little insect aviators circling my head to the presumed horror of everyone who had not seen the movie. Not to mention I might not be the only moviegoer next day walking pet flies. I actually contemplated doing it after watching the movie, just to see how far I could get in my neighborhood before someone called 911. Thank the good juju John Cusack’s exemplary performance shooed that notion away before it could gain any traction.


Of course I enjoyed the book! Of course I enjoyed the film! For different reasons, as well Ebert should know. Which did I enjoy more? That’s not fair! Visually scenes from the movie continue to float around my head as though taped to strings attached to my shirt. More subtly, here are some examples of the stories that didn’t make it into the film but are as memorable as anything I’ve ever seen in a theater. Part of the credit belongs to Berendt’s gifted writing.Giving Berendt a tour of the city his first day in Savannah, a local woman, Mary Harty, takes him to one of the cemeteries and points out the graves of the poet Conrad Aiken’s parents. Both died on the same day.

“This is what happened,” she said. “The Aikens were living on Oglethorpe Avenue in a big brick townhouse. Dr. Aiken had his offices on the ground floor, and the family lived on the two floors above. Conrad was eleven. One morning, Conrad awoke to the sounds of his parents quarreling in their bedroom down the hall. The quarreling subsided for a moment. Then Conrad heard his father counting, ‘One! Two! Three!’ There was a half-stifled scream and then a pistol shot. Then another count of three, another shot, and then a thud. Conrad ran barefoot across Oglethorpe Avenue to the police station where he announced, ‘Papa has just shot Mama and then shot himself.’ He led the officers to the house and up to his parents’ bedroom on the top floor.”
Miss Harty lifted her goblet in a silent toast to Dr. and Mrs. Aiken. Then she poured a few drops onto the ground.
“Believe it or not,” she said, “one of the reasons he killed her was … parties. Aiken hinted at it in ‘Strange Moonlight,’ one of his short stories.

Then Mary Harty told Berendt he was sitting on Aiken’s grave, as the two of them were perched on a marble bench that constituted his gravestone.
And here’s an amusing account of one of the most engaging characters in the book and the movie, Joe Odom, as he learns tricks on how to make a success of the bar he’s just opened:

Joe sought the advice of Darlene Poole, who knew the bar business inside out.
Darlene had worked as a barmaid in a number of local saloons and was engaged to the owner of a successful club on the southside. She and Joe sat at a table having a drink. “You got a nice setup here,” she said. “The blue-rinse-and-foxtrot crowd finally have a place to go. Can’t hardly go to the Nightflight, can’t go to Malone’s, can’t go to Studebaker’s. You got ’em all to yourself, honey. Nice going. Plus I see you’ve got Wanda Brooks coming in here. Broads like Wanda are what I call insurance. With her bumping into everybody and knocking drinks over left and right at three bucks a shot, you can’t help but make it work. Now, if you can just keep the freeloaders out and stop giving away the liquor, you should do all right. Just make sure nobody’s glass stays empty too long.”

The only question remaining in my mind is which should come first, the book or the film. Ebert read the book first and claims this ruined the movie for him. I saw the movie first and therefore had no such problem. The book did slow down and become a tad tedious in places. This never happened for me with the movie. So which version might I revisit first should I wish some day to revive my interest in the fly trick? That, my friends, is a dumb question.