Some years back I bought a copy of Stephen Hawking’s A Brief History of Time. I knew Hawking was important, that he was cutting edge. I was curious. I don’t think I got past the first page or two. The language of physics was over my head, yet I caught enough to be vaguely intimidated, suspecting if I struggled with it enough to understand where the author was going I’d soon be revisiting my old nightmares about suddenly getting sucked into a black hole. 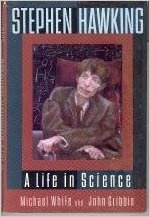 Well, that danger is abated. I have learned in Stephen Hawking: A Life in Science that black holes are more abundant than visits by Chicken Man: they’re everywhere, they’re everywhere. Presumably sucking sucking sucking… Some—an infinite number, actually--are infinitely smaller than the dot at the end of this sentence. Sucking sucking… But the best news I learned from this fairly-easy-to-follow biography of this incredibly hard-to-understand man is that our entire universe is a black hole—one among an infinite number of universes, all of them black holes. I’d have put an exclamation mark after that last sentence had I not become so astoundingly sophisticated in matters of cosmic theory reading this amazing book, which I picked up for half a buck a couple of weeks ago at the library’s used book sale. It was sitting next to a credibly slim volume titled The Wit and Wisdom of Donald Trump, which, according to my understanding of theories discovered by Stephen Hawking (and my own intuition), possibly itself contains an infinite number of black holes. Needless to say, I had one helluva time trying to decide which of these two possible collections of theoretically possible black holes to spend my fifty cents on.


Now then, here’s my own theory, one which I feel empowered to expound from a foundation of virtual math illiteracy and inherent mistrust of most anyone who seems to know more about something than I do. I would guess such mistrust is explained somewhat, explicitly or by inference, in the fictional Trump book. (Not to worry, there’s no math in this theory): We know that at first few if any human beings knew precisely what the hell Einstein was talking about when he came up with the “special theory of relativity.” It didn’t help that many quickly understood Einstein’s equation E = mc 2 because they still didn’t know what the hell he was talking about. To this day I am fairly clueless.


Moving along briskly here, Hawking’s theories of black holes and other celestial phenomena are even more obscure than Einstein’s theories to my cosmically deprived little brain. I enjoyed reading about them, though—the theories—if only because once I realized that I myself might well be a black hole or at least host to a bunch of them my dread of dreaming the damned sucking dream succumbed to an awesome sense of being Mr. Universal Danger, armed with the knowledge I could at whim strike terror in the hearts of anyone who didn’t know the secret that they too might well be black holes or hosts to a multitude thereof. I’d be wearing tights and a cape were I not uncomfortable with the prospect of starting a dangerous fashion trend among the black hole cognoscenti. Or be misunderstood by the folks in the white suits with the tranquilizer darts.


Getting back to my theory, if only a metaphoric handful of physicists, astronomers and mathematicians are hip to the guts of these theories, who's to say they don’t push their equations into a little niche so esoteric only they can credibly pretend the equations make sense? It’s all just theory anyway. No one has ever identified a black hole, nor will anyone ever likely do so, as Hawking assures us. It’s this small coterie of elite scientists we’re supposed to trust. And Hawking seems perhaps more trustworthy than the average brainiac because he suffers from a disease that’s left him almost completely paralyzed. 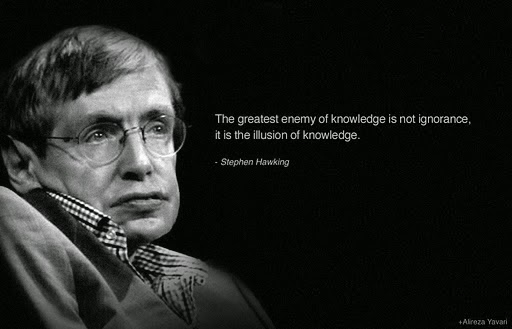 But we know the guy has a wicked sense of humor, White and Gribbin say so in Stephen Hawking: A Life in Science. Wicked sense of humor. Folks who know him, including White and Gribbin, say you can see the mischief in his face. And he loves to whip around the cloistered Cambridge campus at breakneck speed in his motorized wheelchair. He also loves to whip around dance floors in it, flirting with women. I learned also Hawking has three kids by his wife, whom he left after 25 years to move in with his nurse-come-mistress. Them apples, whattaya think? The guy’s a player! A practical joker/player who just might be putting one over on all of us.


So intrigued was I about halfway through the book I bought the DVD of The Theory of Everything, based on Hawking’s wife Jane’s book about their marriage. The flick left me spellbound. I started sitting around with my head lolling to one side, practicing mischievous grins and smartass quips. What the hell is wrong with me? I couldn’t even help my kids with their geometry homework. Now I’m wondering if geometry is some brainiac joke too.