I'm just over halfway through my second reading of Something Happened but I'm already ready to write about it. This doesn't mean I'm bored with it (although there are long tedious stretches of repetitious pronouncements, retractions, doubts, worryings, regrets, and yearnings--the damned thing goes on for 569 frickin' pages!!--which, however, are exciting in the strictly cognitive sense that they comprise a major component of Something Happened's genius, contributing to its status in my opinion and that of others as the current American Novel, drenching the period from about the last half of the 20th century up to now with its merciless spotlight), because if I were (bored with it) I wouldn't be reading it through to the end (which I am) while I write this essay on it. 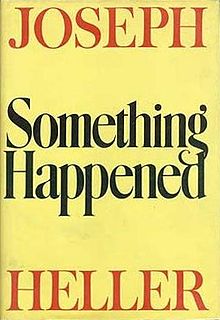 I almost called this a review but it's not, because, shamefully aware of my limited knowledge of and facility with the critical criteria to evaluate a literary work (i.e. the appropriate use of such terms as "texture" and "limning" and "layers" and "perspective" and "voice" and "valence") I rarely do book reviews yet quite often feel an intuitive need to convey to others my reaction to a work of fiction that's had (and in some instances, such as this one, is having) an important effect on me even if there are the tedious stretches, which in Something Happened may well have been just as tedious if not more so for Joseph Heller when he wrote them. I do know more about these criteria today of course than I did the first time I read Something Happened, which was when it came out (ha, ha) in 1974, which was when the expression came out could be used quite innocently to mean was published without the need to add ha, ha to show that one recognizes the expression now means to come out of the closet as a homosexual, which, as a sexual orientation was still pretty much in the closet so far as casual, indirect references were made to it in popular literature at the time Something Happened (which does have some boldly direct references to it) came out. Here, for example, is the narrator of Something Happened talking about his concerns with homosexuality, which he and his wife worry quietly about concerning their son and which he (the narrator) worries about concerning himself:


I can be strong and unemotional when it comes to someone else. I think I may worry as much about talking out loud to myself as I worry about stuttering. I think some of my dreams may be homosexual. I think I’m afraid I might start stuttering incurably when I even think that thought of being homosexual. I don’t know why I feel that way about those dreams. And I also feel that some of my other dreams may be heterosexual, and I do know why. I am chasing and pumping away with girls in those dreams and almost get there … And know also that much of my waking life is composed of defenses against behavior I am not aware of and would find difficult to justify. Why do I feel like crying so often and why do I refuse to let myself do so … ever? There are times, afterward, when I wish I did and regret I didn’t. I often used to feel like crying after quarreling with my daughter. I am no longer proud that I can remain unmoved. I hope desperately that my little boy never finds out I’m a fag if that is what I really am, although I think I might derive some nasty gratification if my wife began to harass herself about that possibility.


Pretty racy stuff (meaning risqué, as racial issues, too, were pretty much skirted in bourgeois literature back then when whites called blacks "Negroes" or "colored people" in polite publications) back then in bourgeois literature, which of course Something Happened most definitely was (bourgeois) if only because it was so popular, as "high" literature has always prided itself on excluding the boobswasie by "virtue" (ha, ha) of its members-only standard of elevated vocabulary and syntax and words in fashionable foreign languages and pertinent references to the literature of venerable long dead or esoteric living fictionalists, poets, philosophers, and essayists the more obscure the cleverer. There aren't any big or italicized foreign words or clever literary references in Something Happened, which must have offended the most self-serious of the literary pecksniffs at the time and undoubtedly continues to deeply annoy those remaining in power and their post-post-...modern (one can never be certain how many posts are in fashion with whom at any given time, which is precisely why the ruling pecksniffs keep that target moving, one suspects) acolytes. The breakthrough for Joseph Heller had come more than a decade prior when an editor at Simon & Schuster, Robert Gottlieb, let fly (in spite of himself, no doubt) while reading a rough draft of Heller's first novel, Catch-22,

the laugh that smashed through the virtually impregnable gate of literary pecksniffery (fortunately the gate wasn't, at least then, literally impregnable, ha, ha), which remained ajar thirteen years later when Something Happened happened. Ha, ha. Unfortunately, in the words of Shakespeare, or perhaps someone of equivalent literary stature (maybe even a purveyor of irony in the Bible!): "No good deed goes unpunished," which in our context applies many years later to Robert Gottlieb's rejecting John Kennedy Toole's Confederacy of Dunces (even though he might have laughed, but the times they had a'changed, taking with them, one presumes, the vogue of a different sort of laughter), which went on to win a Pulitzer after Toole, discouraged and taken to drink, gave up writing and soon thereafter killed himself. (Ha, ha.)


Where were we? How did Something Happened affect me when I read it the first time? Back in 1974 when it first came out (ha, ha)? It made me laugh. Other than that, I can hardly remember much about it. I'd even forgotten about it pretty much, as I suspect most everyone else has, having laughed when they first read it, and then moved on (like I did) to read serious, pecksniff-approved literature. So why do I (how can I?) assert that Something Happened is the American Novel of the period from about the last half of the 20th century up to now? Notice I do not say "Great" American Novel, as I believe the word "great" to be greatly overused, overused to the extent its significance has pretty much devalued from, say, Great Expectations to, say, "Great Balls of Fire." But, prompted by Fictionaut.com's resident dark satirist Chris Okum, I'm revisiting Something Happened and coming to see it as the quintessential depiction in the mind of one of its victims of the cruelly indifferent, identity torquing, soul-sucking miasma our materially resplendent "civilization" (ha, ha) has drifted into, lured and goaded by primal forces better understood and explained by poets, cartoonists, philosophers, psychologists, sociologists, and possibly even anthropologists (not to rule out metaphysicists!), encapsulated in this example, to wit (channeling Heller with the pun of insanely ironic legalese, which I should apologize for assuming I needed to explain):

I wonder what kind of person would come out [ha, ha] if I ever did erase all my inhibitions at once, what kind of being is bottled up inside me now. Would I like him? I think not...Deep down inside, I might really be great. Deep down inside, I think not. I hope I never live to see the real me come out. He might say and do things that would embarrass me and plunge him into serious trouble, and I hope I am dead and buried by the time he does. Ha, ha.

(Nothing is suppressed in our family.)


(In our family, everything is suppressed.)