I have come uncomfortably near reaching a conclusion that "Jonathan Franzen" is the most ingenious, elaborately implausible hoax ever perpetrated on the New York literary establishment and, hence, the literary world. My evidence is largely intuitive, but is supported in my mind by what I consider significant clues in the text of the 2006 so-called memoir The Discomfort Zone, of which New York Times critic Michiko Kakutani's severe panning prompted "Franzen" to call her "the stupidest person in New York City." 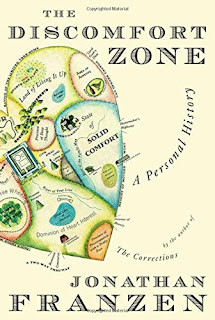 This, in fact, this girly sounding tantrum (contrasted with Norman Mailer's "one-woman kamikaze" response to the Kakutani castration effect), is the first clue to support my hypothesis. The supposition grew out of an intense distaste for the very name "Franzen," which I associated early on with an incident of shrill elitist arrogance. So far behind the curve of "high" literary fashion at the time (2001), I'd been unfamiliar with the name when it arrived to my attention in a breaking news item. The reputed literary novelist known as "Jonathan Franzen" had just insulted millions of TV megastar Oprah Winfrey's fans by whining publicly her picking his recently published novel The Corrections to feature on her program would endanger his reputation with "high" literary society. Appalled by such shrieking hubris, I banished "Jonathan Franzen" from further literary consideration despite The Corrections proceeding on to bestsellerdom and a National Book Award.


Yesterday, in an unusually forgiving mood, I read my first and likely final "Franzen" work. It seemed an appropriate compromise to break my sixteen-year boycott with the book Ms. Kakutani described as "an odious self-portrait of the artist as a young jackass: petulant, pompous, obsessive, selfish and overwhelmingly self-absorbed." All true. Ms. Kakutani overlooked one thing, though, as I see it. She assumed the jackass is one person. Nuh uh. The "Jonathan Franzen" who is nearing the pinnacle of commercial and critical literary renown despite his proudly proclaimed noisesomeness is the prankish creation of a group of high school girls allegedly in the upper-middle-class St. Louis suburb of Webster Groves.


My evidence is in the book.


Narrated by "Jonathan Franzen" as a bildungsroman (fashionably literary for "coming-of-age book"), the girly voice gives us glimpses of comically awful parents, and of a not surprisingly awful, oversensitive childhood and early adolescence. Exhibit A:


Of the many things I was afraid of in those days—spiders, insomnia, fish hooks, school dances, hardball, heights, bees, urinals, puberty, music teachers, dogs, the school cafeteria, censure, older teenagers, jellyfish, locker rooms, boomerangs, popular girls, the high dive—I was probably most afraid of my parents. My father had almost never spanked me, but his anger had been Jehovan when he did. My mother possessed claws with which, when I was three or four years old and neighbor kids had filled my hair with Vaseline to achieve a kind of Baby Greaser effect, she’d repeatedly attacked my scalp between dousings of scalding-hot water. Her opinions were even sharper than her claws. You just didn’t want to mess with her. I never would have dared, for example, to take advantage of her absence from the country and break her rules and wear jeans to school, because what if she found out?


For three years, all through junior high, my social death was grossly overdetermined. I had a large vocabulary, a giddily squeaking voice, horn-rimmed glasses, poor arm strength, too-obvious approval from my teachers, irresistible urges to shout unfunny puns, a near-eidetic acquaintance with J.R.R. Tolkien, a big chemistry lab in my basement, a penchant for intimately insulting any unfamiliar girl unwise enough to speak to me, and so on. But the real cause of death, as I saw it, was my mother’s refusal to let me wear jeans to school. Even my old friend Manley, who played drums and could do twenty-three pull-ups and was elected class president in ninth grade, could not afford to see me socially.

I must admit remembering a few similar anxieties at that age. But I had no interest in Tolkien, am not much of a punster, and I cannot imagine at any age deliberately insulting any girl who was friendly to me. I'm rather certain, as well, I did not exhibit the flighty attitude.


With our narrator now in college one might expect the self-conscious tone to have cowboyed up beyond suspicion. It hasn't. It's gotten worse. He visits a girl he'd been sweet on (yet calls her by her last name, Siebert) at her college. She'd broken her back trying a silly stunt our narrator characteristically thinks she did to compete for his affection with a different girl he'd dated who did the same stunt (it's complicated). Siebert is healed now, and she and our narrator are talking about Freud and how maybe some subconscious notion caused her to let go and fall from the Eden Seminary bell tower downspout she'd been trying to climb. Our narrator starts pondering, to himself, his own susceptibility to awful subconscious notions, like when as a boy he suddenly dropped his pants to entertain a couple of neighbor girls peeking through a window at him from their house. His pondering gets the best of him: "I started screaming in terror. I screamed at the top of my lungs, which freaked both me and Siebert out. Then I went back to Philadelphia and put the whole episode out of my mind."


Puzzling, isn't it? Hard to imagine a college male not on drugs (which our narrator never mentions in this scene) doing something like that, so excessively. And then writing about it so coyly. Puzzling, unless you buy my assumption, which depends of course on more evidence than merely a purported man's unmanly voice, of a grand conspiracy. I see plenty of conspiratorial clues in the high school portion of this bildungsroman.


Our narrator claims to have been the brains of a tightly knit group of fellows calling themselves DIOTI (don't ask) that on several occasions broke into their high school to pull highly sophisticated, labor-intensive, and, in one instance quite dangerous, pranks. Again, nuh uh. Not credible. No self-respecting group of high school dudes, including a football player, would suffer such a preening, punning, horn-rimmed dork as their brains in a dangerous undertaking. Not a chance these pranksters did what the book claims. Not a chance they were guys. They were girls. Brilliant, literary, highly imaginative girls, and they've played--are playing--one helluva mind-jiggling, thigh-thumping, literate-world-embracing prank. Middle-aged now, these ladies continue cranking out literature highly regarded by high literature's golden gatekeepers. Why, at this rate they might wind up winning a Pulitzer, even the Nobel. And if they do win one or the other, or both, their figurehead, DIOTI's token male whom the world knows as "Jonathan Franzen," whom DIOTI no doubt took unto its collective bosom primarily for his improvisational acting talents, will gladly and gracefully deliver whatever statements and/or speeches of gratitude the women of DIOTI create for him to hail the socially realistic "New Sincerity" glories of humanity, which will not merely endure, but will prevail, etc. etc.


But...you know? Come to think of it, I really can't imagine anything even remotely stupider.