One and possibly two good things came of my not knowing then that Jonathan Franzen had given Leaving the Atocha Station a two-eyebrows-up recommendation. The good things are sequentially related. First, solely because Maureen Corrigan praised Ben Lerner's debut novel as "one of the most compelling books about nothing I've ever read," I read it. Then (a word smarmy, smug Jonathan Franzen preemptively scolds any serious writer for using) because I so liked Leaving the Atocha Station, I've since, upon learning of his endorsement, decided to break my lifelong shunning of anything by Franzen and read one of his goddam books. 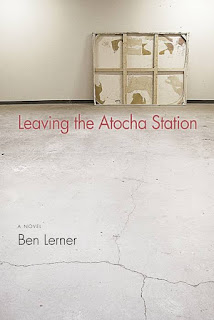 No doubt it was sheer cosmic cooperation back in 2011 that shielded me from knowing the novelist New York Times literary assassin Michiko Kakutani reduces to choking, self-pitying sobs whenever he so much as begins to associate something with her had deigned to bless Leaving the Atocha Station. Nor can I rule out the possibility knowing one of Kakutani's favorite whipping boys had shone his tepid countenance upon Leaving the Atocha Station wouldn't have preempted my welcoming such Corrigan exuberance as “flip, hip, smart, and very funny” and “unlike any other novel-reading experience I’ve had for a long time,” and then (haha, Franzen, you pusillanimous pecksniff) going on to say Flavorpill, a self-described “daily guide to [high] quality cultural events in New York City, Los Angeles, San Francisco, Chicago, Miami, and London.," had anointed Leaving the Atocha Station as “the coolest indie press book going around right now.” Franzen schmanzen, I mean who doesn't want to be seen as cool by those who count? And Lerner was already a National Book Award finalist in poetry. Solid literary creds, probly why Franzen wheezed and scrabbled his way onto the Lerner bandwagon--they even look a little alike. Had I known this then...nah, I'd have read it anyway. I've always pretty much trusted Corrigan (despite her having once praised a Franzen novel--every human's entitled, we are told, to occasionally err). I shall probably always detest Jonathan Franzen, on strictly intuitive principles, but, then (yeah, hahahahaha) he was right about Lerner, so...


So what's so hot about Leaving the Atocha Station? I'm giving you some links to professional opinions. In a New York Times review novelist Gary Sernovitz insightfully compares Lerner's novel with Hemingway's debut, American expatriot classic The Sun Also Rises. Sernovitz calls Leaving "a bildungsroman and meditation and slacker tale fused by a precise, reflective and darkly comic voice. It is also a revealing study of what it’s like to be a young American abroad." (I figure anyone who uses a word like bildungsroman as easily as, say, then, is no one to mess with.) And Sernovitz adds that Adam Gordon (Lerner's answer to Hemingway's Jake Barnes), "a poet, having bluffed his way into a fellowship in Madrid, makes friends, struggles with Spanish, smokes hash, wanders around, writes poetry, doubts poetry and has two low-energy love affairs."

No bullfights, no stoic, macho triumphs or beautiful final lines like "isn't it pretty to think so." It does have the kind of spectacular drama a Jake Barnes would have waded into, flinging subtly charged monosyllables at all the right moments: the terrorist bombing of Madrid's main train station, but Adam Gordon can't summon enough concern to give it much of a hoot. It's even doubtful the Atocha bombing has more than a coincidental name-recognition link to the book's title, which the pro critics say more than likely relates to a nasty little poem by the hugely celebrated (among the entendring patriciate) post-post-post-post...(not sure how many we need here)...modern poet John Ashbery. Here are the first few lines should you think I'm being unfair with the "nasty":


Catch the drift? I'm no poet, obviously, and knowing this connection, the Ashbery one, and that Lerner himself was a celebrated poet presumably of that ilk, might have helped with the insipid Franzen's endorsement to steer me away from this novel. So glad I was ignorant of all that, and while I seriously doubt I will ever read any of Lerner's poetry--even the collection he's archly titled I Hate Poetry (the poems therein I suspect intended for academics, dilettantes, and other post-post-post, etc. modern poets)--I would with hungry anticipation read another novel of his were he to write one.


Leaving Atocha Station carried me back to my own youthful wanderings in Paris and Barcelona pretending to be a writer and romantically presuming to fathom life and trying desperately to be cool. The essential difference between us (me and Adam Gordon) is that Gordon is brilliant. He understands his narcissism and uses it to what he hopes is his advantage. This means he can laugh at himself, like when he attends an upscale party and realizes he's woefully outclassed:


As we entered the party I reminded myself to breathe. There were a lot of handsome people in the sweeping whit-carpeted living room with minimalist furniture and monumental paintings on the carefully lit walls.


Various people greeted us and Teresa detached from me to kiss them and I was acutely aware of not being attractive enough for my surroundings; luckily I had a strategy for such situations, one I had developed over many visits to New York with the dim kids of the stars: I opened my eyes a little more widely than normal, opened them to a very specific point, raising my eyebrows and also allowing my mouth to curl up into the implication of a smile. I held this look steady once it had obtained, a look that communicated incredulity cut with familiarity, a boredom arrested only by a vaguely anthropological interest in my surroundings. A look that contained a dose of contempt I hoped could be read as political, as insinuating that, after a frivolous night, I would be returning to the front lines of some struggle that would render whatever I experienced in such company null.


The goal of this look was to make my insufficiencies appear chosen, to give my unstylish hair and clothes the force of protest; I was a figure for the outside to this life, I had known it and rejected it and now was back as an ambassador from a reality more immediate and just.

Coffee House Press, Lerner's publisher, includes blurbs on its website from many review's of his book. One I especially like, from Open Letters Monthly, says, “. . . Leaving the Atocha Station is as much an apologia for poetry as it is a novel. Lerner’s ability to accomplish both projects at once is a marvel. His sense of narrative forward motion and his penchant for rumination are kept in constant competition with one another, so that neither is allowed to keep the upper hand for long. Leaving the Atocha Station is a novel for poets, liars, and equivocators—that is, for aspects of us all. It is also a poem, dedicated to the gulf between self and self-ego and alter ego, “true me” and “false me,” present self and outgrown past.”


Wish I could grasp good writing that way and discuss it as intelligently. Wish I could write prose like Lerner's.


James Wood in The New Yorker