Bad news in Texas is good news for Annie Price, the leggy, intrepid Houston Times investigative reporter whose exposés broke up a dangerous secessionist plot and quashed a rich rancher's campaign for governor. Bad news good for Price despite the cost of a colleague's murder and almost her own, such being the calculated risks for clarion snoops of her stripe. 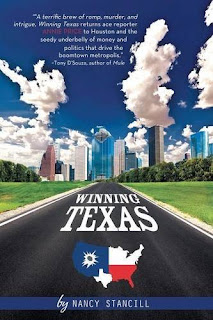 That was four years ago, described with nail-chewing suspense in Saving Texas, prequel to Winning Texas. Their author, former investigative journalist Nancy Stancill, has worried bad guys for newspapers in Houston, Charlotte, N.C., and Newport News, Va.
This time there's bad news for Price as well as the other kind of bad news, the good bad kind. Although she's been promoted to investigative editor, her newspaper is sinking like the Titanic—the deck is already awash under her feet, and the water's rising. But this is the kind of bad news daily newspapers are facing everywhere, with plunging readership and advertising revenue forcing owners to cut operating costs. This includes freezing pay, leaving vacancies open, and laying off staff. Price's team of reporters is stretched so thin she's forced to grab her notebook and hit the pavement herself when, while eating breakfast, she hears on the radio that a floater has turned up in the Houston Ship Channel by the Valero petroleum refinery. “Floater” is police parlance for water-borne corpse.
She heads down to the channel, her mind spinning with anxiety and excitement:

She'd never outgrown a reporter's stage fright, even now as a fairly experienced editor. She was spending too much time at her desk editing other people's stories. Would she still be able to coax enough details out of the police? Could she frame her story fast enough to be competitive? Would she get all the details right? Timing was everything on the police beat, especially now that Houston's radio, TV and newspapers all had fiercely competitive websites. She was definitely rusty and she'd always performed better on longer stories with more expansive deadlines. But she knew that once she got on the scene she'd stop worrying, and her skills would take over.

To her relief the lead detective on the scene is an old friend. They go for coffee. He fills her in on the skimpy available facts, which she phones in to the newsroom. For Annie Price the game is literally afoot once again. 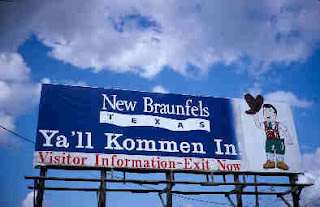 Stancill bases her fictional material on real happenings. In Saving Texas, the secessionist movement, Nation of Texas, resonates from a long tradition of secessionist feeling in the Lone Star state. Annie Price's reporting drives it underground, but it's creeping back in the sequel. This time the ex-CIA operative who's secretly behind Nation of Texas targets a new group that's promoting German-Texas, also inspired by circumstances outside the novel. According to the Texas State Historical Association, “after Anglos, Mexican-Americans and African-Americans, the ethnic group with the largest impact on Texas has been the Germans.” Probing by Price and her team turns up key figures in the German-Texas movement, being sold ostensibly on the idea of encouraging businesses to emphasize their ethnic culture as an attraction for tourists to the Central Texas Hill Country, location of the largest German settlements.
As with the Nation of Texas movement, German-Texas has some questionable undertones, including a plan to arm members of the community supposedly as an adjunct to understaffed police departments. One of the movement's biggest donors is a man who owns a chain of strip clubs. A Houston Times reporter, one of Price's team, is beaten to death behind one of these clubs after trying unsuccessfully to interview the owner. Someone slashes the tires on Price's car parked behind her apartment. Another member of her team leaves to take a TV anchor job, and, as if in spite, moves in on Price's former fiance. Her personal life takes an unexpected hit when, intending to surprise her new lover at his apartment with the key he'd given her, she finds him in bed with another woman.
Of course she's battling a drinking problem—the traditional occupational hazard, but... But she's intrepid, remember? Did I mention the “sinking” newspaper? Price can't help wondering if the Houston Times will still be there to print the story she's working on, if in fact she and her shrinking team can manage to live long enough to crack the case. The paper's owners have already jumped ship, notifying their employees in a grim newsroom meeting they've sold out to a hedge fund that intends within several weeks to shift the entire news operation to its website. This would mean reducing the already downsized staff to little more than a handful of reporters and editors. Would Price even have a job?
She can't let this stymie her, though, intrepid newsie that she is. Do she and her two remaining reporters get the story? Bet on it. Is there still a Houston Times to print it? Barely. Will there be a sequel to Winning Texas? Stancill promises us there will. It's a credible promise, too, as, like at the end of Saving Texas, a couple of really bad guys are still on the loose. There's even a chance Annie Price will finally make it to the altar with one of her on-again-off-again boyfriends, this one looking like a sure thing. If so, will her two cats mind? Probably, but isn't that what cats do?
[find more Friday's Forgotten Books reviewed at Todd Mason's amazingly eclectic blog:
http://socialistjazz.blogspot.com/]
Posted by Mathew Paust at 4:35 PM