THIS JUST IN: CONCRETE ANGEL WAS VOTED “BEST FIRST NOVEL” AT BOUCHERCON FRIDAY NIGHT! (6 May, New Orleans)
Perverse, it would seem, to publish this review of Concrete Angel, about a monster mother, so near the Sunday devoted annually to honor mothers everywhere flowers and greeting cards are sold or received. The timing was not on purpose. My mother died some years back, taking with her the incentive to remember such calendar events. Nor was Mother's Day likely on Patricia Abbott's mind when she decided to dedicate to debut novels this Friday's “forgotten books” feature on her widely popular blog. 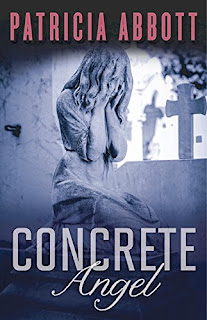 What is intentional is my review of Concrete Angel for this feature. Concrete Angel happens to be Abbott's own debut novel, published nearly a year ago. I read it then, and re-read it yesterday. The first time was a jaw-dropping experience. Yesterday was the same jaw-wise, but from a different vantage. This time the characters revealed much of themselves I'd missed before, before I knew how it all would end. This time they pulled me so deep into their lives I'm afraid I might have given voice to my fears, muttered warnings, trying to get my fictional friends out of jams, to see the dangers ahead. I should probably wait another couple of years before reading it again, give my imagination a rest, or I might end up inside Concrete Angel for good with no way out.
Yet another cosmic convergence of timing brought me back to Concrete Angel to sound this unintended discord amid the harmony decreed for mama's special day. Last week I brought several of John le Carré's novels home from the library's used-book sale, and immediately read A Perfect Spy. Unbeknownst to me as I started reading, the primary supporting character was the eponymous spy's monster father.
Villainous parents, of course, have played prominent roles in our fictional dramas since the days of Sophocles, and no doubt earlier. What keener way to engage the inner adolescent in anyone than to tickle memories of that tug-of-war between love and independence that arrives inevitably with awakening from innocence? In Concrete Angel twelve-year-old Christine's travail with this filial rope enters a lethal arena when her divorced mother shoots a man to death in their apartment while her daughter's asleep in the next room. Mother persuades daughter to take the rap, claiming daughter, awakened by noise, mistakenly thought the man mother had invited to the apartment only hours earlier, had entertained and then taken to bed, was attacking her.
The ruse works. The authorities buy it, and the only legal consequence is court-ordered counseling for the girl. Even Christine, bewitched by her mother's powerful, manipulative personality, almost comes to believe the imaginary version of what happened. In fact, Christine's mother had emptied her revolver into the man as he tried to call the police after catching her going through his wallet.
Occurring only weeks after Christine's parents' divorce, the murder caps what up to then had been an abnormally tight relationship between mother and daughter. Christine, from her earliest memories, had assumed the role of confidante, passive accomplice, and protector to an obsessive/compulsive, thieving con-artist mother. The shooting punctures Christine's albeit uneasy comfort zone in this bond. It arouses her survival instincts, allowing her to see her life more objectively and to recognize, by increments, the intimate toxicity of her mother's presence.
Christine bides her time. She's inherited, if not the pathology, her mother's toughness and cunning, traits similar to those of le Carré's spies. And Christine does become a spy, but her only target is her mother. It takes six more years before the girl, now eighteen, knows it's time to make the break. Her incentive is to save her younger step-brother from succeeding her as their mother's unwitting partner in crime. She sees it already happening, their mother taking the cutely dressed boy with her as a diversion while she shoplifts and buys merchandise with fake identification and bad checks. It comes to a head when the gun is turned on Christine after she confronts her mother with documentary evidence of her lifelong crimes.
Obviously Christine survives, at least long enough to narrate much of Concrete Angel. And hers is a surprisingly upbeat, wryly amused voice. Her mother amazes her in retrospect, the daughter admiring in a detached way the beauty and charm of this agile, quick-witted, thoroughly self-absorbed woman. It's as if she's describing some wild jungle cat, some force of nature, the way her mother sees herself.
“No one can cure me because there’s nothing to cure. I just like my junk,” she says when confronted with her obsessive need for things. On another occasion, when her husband suggests another in a succession of professional treatments, she offers this snarky observation: “Acquisitive women must rank at the top of the list of faddish psychiatric disorders.” She blinked her eyes twice. “You only have to think of how many synonyms there are for greedy to get the gist.”
Despite Christine's general tone of savvy insouciance, her loneliness and mounting despair appear with sharp poignancy in this reflection as she struggles internally with the separation she's coming to accept as inevitable: Whole sections of my life— our lives— were forbidden topics. No, more than forbidden. They’d virtually disappeared... There was no one in my current life who wanted to hear about my past. There was no past; we lived in the moment. Mother had reinvented us time and again. And would forever, I feared.
Patricia Abbott's next novel, Shot in Detroit, is due out in June. It should come as no surprise I've pre-ordered it for my Kindle.