Back when you were so much older, as the saying goes, and that wild-haired, skinny troubadour taunted you in his nasty, nasal, tone-deaf voice that you didn't know what was happening did you, it annoyed you a tad, didn't it? You laugh, of course, now that you are younger and able to accept there are many things you don't know and never will and don't give a big cahoot about knowing. Many things. 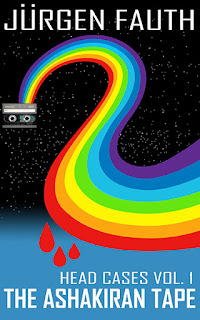 There are things, though, that you do give a big cahoot about knowing. One of these is the singular recording everyone seems to be looking for, that some would pay big money for, kill for. The things you want to know are, regarding the tape, what is on it and where it is. But this, the tape, really is only of secondary size among your cahoots, at first. The big one at first is how to get back your stolen Phish concert tickets. You eventually discover a connection, between the tickets and the tape, and once this revelation comes to you, the tape immediately ascends as the subject of your biggest cahoot.
At this point, were this an earlier day and you a sly, dangerous, knockout dame, you'd hire a tough private eye—say, Sam Spade—to find the dingus--the tape—and get your tickets back to boot, before you bumped him off. But this is not an earlier day. It's right now, and you're not any kind of dame. You're Quentin Pfeiffer, aging Dead Head/former Phish Follower/married-soon-to-become-father trying cautiously to pass the rocker torch to his wife's guileless niece and her callow boyfriend by taking them to a Phish reunion concert at Long Island's Jones Beach. This is where things go haywire in a strobing progression so incrementally ominous that if you were not already enjoying a half-decent karmic equilibrium you might feel a need to start calling yourself “Dude.”
Pfeiffer abides without such accouterments, although for our (and the typesetter's) benefit The Ashakiran Tape's narrator calls him simply “Q.” The sly, dangerous, knockout dame in this adventure calls herself Ashakiran, “Goddess of Peace, but you can call me Ash.” She introduces herself thusly to Q and the two youngsters after they rescue her from a tall, lanky “sketchball” who pulls a knife as she tries to fight him off over some sort of bag at the impromptu pre-show hippie bazaar on Shakedown Street outside the concert venue. Are you beginning to feel the bern...I mean buzz? Things are not always as they seem, in life, of course, and especially on Shakedown Street when Phish is playing.
Here's what we are permitted to see as Q and his wards meet the damsel they'd saved from the beast when she comes to thank them after the sketchball dashes away into the crowd, eluding the concert security foot patrol: “You were a-mazing,” a husky voice said from behind. They weren’t alone. The dreadlocked girl had somehow managed to follow them. “All of you, just amazing!” she said, her voice raspy from, Q guessed, years of heavy smoking, and not just weed. “I don’t even know how to thank you!”
Q looked her over and saw that she wasn’t nearly as young as he’d initially thought. Something about her clothes and the coiled strength on display when she was fighting with the lanky guy had made him misjudge her age, but her face revealed the truth, weathered and furrowed by, he imagined, hard living and some less than savory adventures on the road. Her eyes could’ve belonged to a much younger woman though, as if, over the years, a tough shell had slowly grown around something tender. It was a face like a coral reef.
Hardly “Miss Wonderly” of Spadeville. Maybe more like “Maude” of Lebowskiland. Better yet, a Suzy Creamcheesy amalgam of the two. And there's the fat arch-villain, “Greg,” obsessed with getting the tape he'd promised to name after Ashakiran when she promised to steal it for him. A fat and pompous villain as single-minded as Kasper Gutman seeking the bird “that dreams are made of,” or Lebowski his vacuous, porn-queen, fake-abducted wife.
And there's a murder. And it has to do with the Ashakiran tape, reputedly of a private jam session Phish had with Jerry Garcia. Listen in:
“You’re telling me this tape you’re after is Phish playing with Garcia?...I don’t believe a word. Why have I never heard about this?”
Greg shrugged. “I was at the Shoreline shows, and I saw Trey and Page there myself. There were always rumors. But Garcia wouldn’t make a big deal about it, and the guys in Phish probably thought it would sound like bragging, and bragging of the wrong kind. ‘Ooh, we got to jam with Jerry!’ They wanted to be their own thing, not Grateful Dead junior. So nobody ever talked about it.”
“And there’s a tape of this?”
“I’ve been looking for it ever since I first heard about it, fifteen years ago...”
The stuff of acid-spun dreams, greed-glory, mystery, murder most foul, and innocence ravaged and somewhat salvaged.
The Ashakiran Tape is subtitled Head Cases Vol.1. Would there be others. Would that be far far out.

[for more Friday's Forgotten Books see the listing on Patti Abbott's unforgettable blog]
Posted by Mathew Paust at 11:45 AM