THE LOBBYISTS: How Influence Peddlers Work Their Way in Washington – Jeffrey H. Birnbaum

Jack Abramoff 's describing himself as “America's Most Notorious Lobbyist” was clever bait, and no doubt sold more copies of his memoir than had its cover instead whined “Victim of Dirty Rotten System.” It garnered more Amazon customer reviews than all the other serious books on Washington lobbying combined. I was looking for such a book, but I didn't take Abramoff's bait. 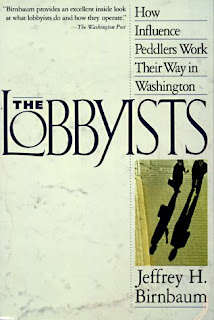 His name rang a bell from some years back, when he got busted and hung out to dry, so his “notorious” hyperbole was redundant for me. A quick scan of the book's 111 reviews told me the alternate subtitle would have been the more meaningful. I chose instead a book with only a single Amazon review, a book neither whining nor trumpeting notoriety. It's the work of a respected journalist purporting merely to explain the system: The Lobbyists: How Influence Peddlers Work Their Way in Washington.


As I started reading The Lobbyists it struck me I might be scratching a dangerous itch, exploring a question of the sort that had occupied my aviator father whenever he learned of an airplane crash: was it caused by mechanical failure or pilot error? I don't believe he ever explained the significance of this difference to me in so many words. I was a boy, but I wonder now if he was sure he could explain it satisfactorily even to himself. It boiled down to control, I believe. Flying was as close to a religion as my father ever came. Flying itself had to be safe, with as few elements left to chance as possible. The burden fell almost entirely on the pilot to manage the aircraft. If the pilot didn't do his job, he said, the plane “will fly like a piano.” The faith part was twofold—the pilot had to believe he was doing everything right, and he had to trust that his airplane would not without actionable warning turn into a piano.


Reading The Lobbyists I began to understand Jack Abramoff's appeal to so many as villain, not victim. Because he is right. The corruption he blames is thorough and entrenched. So much easier to impute one whose luck ran out than to admit our government is flying like a piano. But this is what then Wall Street Journal reporter Jeffrey Birnbaum forces us to do. The Lobbyists is framed around an account of one of the nation's toughest budget fights, pitting a new president's “read my lips: no new taxes” campaign pledge against our government's worst ever fiscal deficit. Birnbaum spent over three years doing research and interviews, including a year embedded with some of the nation's most powerful lobbyists. His report reads like suspense fiction. The reality of what happened heightens its drama but brings a disheartening prospect. He delivers this blunt conclusion at the starting gate:


Washington has become a club in which the line between those inside and those outside the government is not clearly drawn. Corporate lobbyists have so suffused the culture of the city that at times they seem to be part of the government itself. One result is that corporate America, once a perennial sacrificial lamb when it came to government crackdowns, has become something of a sacred cow. Not only are lawmakers and policymakers reluctant to make changes that would hurt businesses, they even have a tendency to try to help them, as long as budgetary pressures do not interfere. In 1990, Congress passed, and President Bush signed, the biggest deficit-reduction bill ever. But of its approximately $140 billion in tax increases over five years, only 11 percent came from corporations. The rest came from individual, taxpaying families.


Let me repeat those last two sentences for emphasis: “...of its approximately $140 billion in tax increases over five years, only 11 percent came from corporations. The rest came from individual, taxpaying families. This disparity hardly seems new, at least as it plays in our current presidential primary rhetoric. But back then it cost Bush a second term as president. Pundits cited the Clinton campaign's in-house slogan “It's the economy, stupid,” as a reflection of the popular anger toward Bush's presidency and its knuckling under to corporate lobbyists. Clinton capitalized on this anger:

Public awareness of— and disdain for— lobbyists reached a new height with the presidential campaign of 1992. Ross Perot never tired of bashing “alligator-shoed” lobbyists. And Bill Clinton quickly copied him with his own brand of populism. In his acceptance speech at the Democratic National Convention, candidate Clinton said of President Bush, he “won’t break the stranglehold the special interests have on our elections and the lobbyists have on our government. But I will.” Influence peddlers, and the special interests they represented, came to symbolize everything that was wrong with Washington, and Clinton’s election confirmed that the public wanted the system to change.

And Clinton acted on his pledge, imposing new lobbying bans in his administration and pushing new restrictive legislation. But the bans were “riddled with loopholes and affected few people. Experts agreed that lobbying would remain a potent force. The 'stranglehold' of lobbyists would not be broken by President Clinton or anyone else.” Clinton knew this as well:
...despite the president’s populist rhetoric and legislation, he continued to work closely with lobbyists. One of the most important functions in the White House was to coordinate the support of lobbyists and their clients on behalf of the Clinton policies. There was a whole department devoted to the purpose. Clinton himself reached into the ranks of lobbyists to populate his administration. The top White House lobbyist, Howard Paster, was once a top corporate lobbyist; and several members of the cabinet, including Commerce Secretary Ronald Brown and Trade Representative Mickey Kantor, were also professional lobbyists.

A dizzying cast of characters populates The Lobbyists besides the professional influence peddlers of its focus. Most dismaying to me was recognizing among them many names of former government officials and high-ranking staff in both Congress and the Executive Branch. Even former members of Congress were representing corporate interests in the lawmaking process. It was sometimes hard to keep them straight—in the government or working as lobbyists, with some occasionally going from public to private payroll and then back to public. Many government staffers freely admitted they put in a few public years becoming marketable before turning to lobbying to make serious money selling their name and access to former government employers.


Birnbaum avoids the hyperventilating tone of an exposé, presenting his details for the most part with the practiced poker face of a veteran newsman. He leaves it for us to respond with gasps at the unmistakable role the almighty dollar plays in this all-important game—the obligatory campaign fund-raising, speaking honoraria, gifts, free lunches and dinners, and all-expenses-paid trips and getaways for members of Congress and their families. All are technically legal, for the most part, according to laws the lawmakers themselves make. It's a technicality everyone involved, of course, hates to see celebrated in the news and on social media, especially during an election year. More prudent to shift the ignominy onto a hapless scapegoat like Jack Abramoff.

[for more Friday's Forgotten Books see the listing on Patti Abbott's unforgettable blog]
Posted by Mathew Paust at 10:56 AM