As serendipities go this was a dilly. A dipsy doodle of a dilly, a chance coincidence that has gifted me back half a century to a novel that lodged itself more pervasively throughout my psyche than any other. Reading that last sentence scares me a little as I'm not often so definitive, preferring instead to hedge and dillydally leaving as many doors and windows—escape hatches--open as I can without appearing blatantly chickenshit. But I've given this some thought, and I cannot think of another novel that has stayed with me as has Some Came Running. 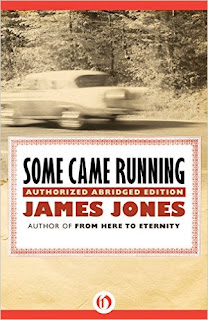 And I have read a lot of novels.
Funny thing is I didn't know how deeply and thoroughly Some Came Running had embedded itself until yesterday, when I started reading it again. It will take at least a week or more for me to finish it, again, but I knew within the first couple of sentences of my second read in fifty-some years how important this masterpiece of James Jones's is. To me. I rarely read novels more than once. And those I have, for the most part, have shown their age—or have reminded me too poignantly of mine. With this in mind, remembering how much I had enjoyed Some Came Running the first time around, I approached a reread with the caution one might feel on the verge of meeting a long-ago good friend after much life has burnished and reshaped memories that could evaporate in a blink.


I started reading, and those first two sentences ignited a thrill of recognition that coursed up my spine, awakening a lucid remembrance of the yearnings I'd once known and bridging that awful time-cluttered gulf between then and now:
Of course, he knew the town when the bus slowed coming into it. He had known it nineteen years ago when he left it, and he would know it again nineteen years from now, if he should ever happen to come back a second time.
I was a few months shy of joining the Army when I first read those words. I'd flunked out of college and lost my draft deferment. Besides, JFK had challenged me to do something for my country. It seemed the romantic if not pristinely noble way out of my dilemma.
Some Came Running was one of several novels a friend had recommended as “really fun.” I normally resist reading books others recommend. Not sure why this is, or why in this particular my friend's recommendation got my attention. Maybe it was the idea of reading for fun, a poke in the eye of my English major. As I recall there were four or five books on his list. I read and agreed with his take on them all.
I'd read Jones's first novel, From Here to Eternity, and enjoyed it, but had put off reading Some Came Running, possibly influenced by disparaging remarks about Jones's writing Norman Mailer made in an Esquire piece around that time. I was big on Mailer then. Still am. His writing continues to dazzle me. But none of it—and I've read everything he published—was able to reach inside my soul and take up residence there the way Some Came Running did. And he was right, Mailer was. Jones came nowhere near the craft brilliance displayed by Mailer or Styron and others of his celebrated contemporaries. I've since come to see that art ultimately trumps craft, subordinates it to the intuitive drive that seeks connection of one soul to another by whatever means, a drive so strong that expressing it may require defying convention, which, if it works, leaves its craft visible only as afterglow.
In this light Jones was an artist. Yet, the voice in Some Came Running strikes one as artless. Not literary miming artless, but genuinely so. I know it's real because it's my voice, the one in my own head. Jones spends a lot of time in his characters' heads, voicing their fears, hopes, embarrassments, delights, angers, schemes, all in the fluid way people accommodate themselves in the privacy of their innermost thoughts. Some Came Running is a mostly subjective novel, and this, I think, plays a large part in its effectiveness. It engages ego as well as id. Voyeurism at its most intimate.
It's been half a century, but I'm right back where I was when the novel first seduced me. I'm in Parkman, Ill., with the other characters, able to follow wherever they go, joining their soul searchings, their drunken romps and knowing the truths of their bedrooms, their every thought accessible.
The ebook edition I'm reading is an abridgment published last year. Under the supervision of Kaylie Jones, the author's daughter, some 250 pages were cut from the original. When first published in 1957 Some Came Running came in at 1,266 pages--”a leviathan,” Kaylie Jones says in a foreword to the abridged version. The following year the movie starring Frank Sinatra, Dean Martin and Shirley MacLaine prompted a heavily cut 624-page paperback version, which is the one I read.
I saw the movie years after I read that book, and recall being entertained but finding little in it that touched the complex emotions the reading had deposited in my memory. And yet, it was the movie that brought me back to Some Came Running. Last week on her blog, author/film reviewer Patti Abbott posted a link to “Gwen's Theme” from the movie. It's a sad/sweet, haunting orchestration that summons feelings of longing and regret, and hope. What the movie as a whole wasn't quite able to do, its music alone accomplished in a few tender moments.
Posted by Mathew Paust at 10:58 AM