Flannery Forgotten? (A Good Man is Hard to Find) 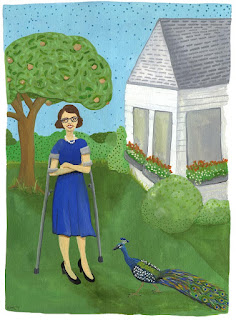 Imagining being forced at gunpoint to nominate someone for the title of Ultimate Forgotten Crime Writer, only one name comes to mind: Flannery O'Connor.


“You ignorant cretin,” the literary gunsel likely would snarl, waving his delicately engraved Mauser pocket pistol in my face as other literati circled around, agape. My attacker would add, voice rising to include the onlookers, “How did you get in here, anyway? Surely you weren't invited?”


“Yeah,” a voice would thunder from within the gathering herd, “Forgotten, hell! I'm focusing my seminar this term on her work.” A soprano shrills above the swelling rumble of crisply sophisticated mutterings: “Crime? How dare you disparage Miss O'Connor as a genre writer! Shame on you.” Another voice, a baritone: “Get the bricks! Let's stone this dumb bastard!”

Hoping my predicament is just part of an extremely lucid nightmare, I will myself to fly, to rise above these predators and sail safely away. It often works. Not this time. My feet seem riveted to the plush carpet. My thoughts of escape veer abruptly into a struggle of alternatives. Cry? Laugh maniacally as if I'd put one over on them? Peer steadily into the gunsel's eyes and in a Bogart growl, calmly—except for an occasional twitch of the right side of my face--ask him how many ebook downloads of A Good Man is Hard to Find were sold in the past quarter? 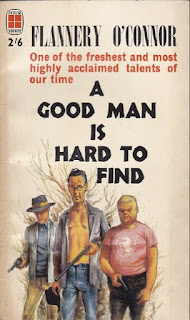 I decide to go with the Bogie approach. I do a couple of quick face twitches and rock my head back until my eyes are fixed on the gunsel's. They blink but lose none of the indignant triumph they'd gained with the unanimous support of everyone in the room but me. I open my mouth to speak. My throat is too dry. To buy time I twitch the face a couple more times and sip some of the Zinfandel from the glass I'd forgotten I was holding. I swallow the wine, do one last twitch and try again.


“You all are making asses of yourselves, except this young man.” Silence. My head reels. What? This isn't Bogart's voice. It's a female voice. It has a soft timbre, yet it's strong. A no-nonsense genteel voice. Southern maybe? My eyes follow the heads in front of me as they swivel and stop. Several of the formally dressed partiers nearest me step back, including the gunsel, who drops his arm until the pistol barrel points at the floor. This drifting away of the pressing crowd opens a lane in which I see standing a small woman in a simple blue dress.


Her brown hair is styled in an old-fashioned do that resembles a furry winter cap like they wore in Fargo—furry flaps over each ear with another over the forehead. Our eyes meet. I can't tell what color they are, but they gleam with bold intelligence. She's smiling shyly, but the eyes prevail. She's evidently one fierce number, and everyone around her picks up on it. Out of the corner of my eye I see the hand holding the little Mauser drop it into a tux jacket pocket. I look up and see the gunsel's face is flushed, evidently with embarrassment.


The woman's mouth opens and I hear words. I miss the first few until I realize they're directed at me. “You're right about being forgotten,” she says, her voice clear and confident. “Folks don't read these stories anymore for entertainment. I guess that's a shame, but at least they're reading them in classrooms. That's a kind of life, I guess. To be remembered for.”


“No need to apologize,” she says, voice even softer. She's reading my mind. “Of course I'm a crime writer. Not the kind some of you”--her head pivots to take in the crowd--“were thinking. Genre, did you say? That some kind of niche? Heaven forbid.” She shakes her head, lips pressed together in dismay. “These stories were never intended for any niche. That's why they weren't all that popular back then even.”


“But--” I try again, unsuccessfully. 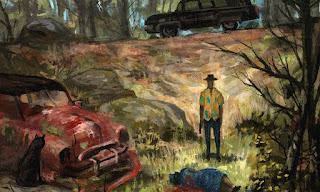 “But,” she says, awarding me a toothy smile, “using today's jargon I suppose you could call these stories crossovers. That is, if you were looking to bring them back for a general audience. When I say crime I mean everything from blasphemy to murder, the whole cotton field. You want noir? Dark? Ha. I'll put Good Man up against anything you got. Mystery? Every one of them takes on the Christian mystery. Ever' last one o' them!” Her voice cracks. She sips from a tumbler of water.

“Some said...probly still do, 'specially in them classrooms...some said the Grandmother is evil, or the Misfit is evil. Why, that's for you to decide, you the reader. That's the mystery. The Grandmother's facing death. She touches the Misfit just before he shoots her. Touches him on the shoulder and says he was her child. And he shoots her. And then he says she'd o' been a good woman if it had been somebody there to shoot her ever' minute of her life. That sound like the devil talkin'?


“The Grandmother was a selfish, hypocritical old woman right up to then. Up to when she knew she was about to die. Was that her moment of grace? I know you're probly not no Christian, but that don't matter. If you are, that's the mystery. If you're not, it's still a mystery. She broke through her selfishness at the end. Saw the Misfit as worth savin'. How did that happen?”


I have to speak. A thought has just come to me. I have to tell her what it is, even though I sense she is more dangerous than the fool with the engraved pistol. “Ma'am,” I say, my voice breaking. I sip some wine. “Excuse me, ma'am, but are you familiar with what they call the Stockholm Syndrome?”


“The Stockholm Syndrome. It's what psychologists say happens when victims identify with their abusers, feel friendly toward them.”


“I see. So you're suggesting the Grandmother identified with the Misfit from some kind of psychologic perversion? Do I have this right?”


I've screwed up. She's giving me the stinkeye. All I can do is gape, trying to smile. I nod my head, timidly.


Her face, scrunched in thought, relaxes, and she lets me off the hook with a small smile. “I hadn't thought of that. Never occurred to me, but I suppose it could have been. Anything's possible, of course.” She glances around at the others, the smile gone. She continues, “You recall she died with a smile on her face, though. It was pretty evident up to then she didn't want to die. She was groveling, pleading, coming undone, if you will. If her gesture at the end was a desperate one from some kind of psychologic twist in her mind to keep from being killed, and he shoots her anyway, would she be smiling?”


The crowd, almost as one, murmurs agreement. I see my glass is empty, and set it on a small nearby table. When I look back up, I can't find the lady with the funny hair. I look around. Evidently she's left.
####
Find other Friday Forgotten Book reports on Patti Abbott's fine blog.
Posted by Mathew Paust at 12:51 PM