The McBain Curse (with The Last Best Hope and Widows)

I'm onto something, I think. I think I'm onto why a certain number of the Amazon “customer reviews” for Ed McBain's novels are so negative. There are always a few negative ones posted by readers so disenchanted by whichever McBain novel they've just tried to enjoy they must go on record. One star, two, maybe even three. This is always the case. Always. It's always the case.

The rest, the great majority of the customer reviewers, award five stars, with a smattering of fours. The fours I think are by readers intending to appear smart and discriminating. They simply will not be stampeded by emotion into awarding five stars for a genre novel even if they secretly loved it to death. Four stars is as high as they'll go--ever--unless to oblige the author, or the book is so obscure they're really awarding the five stars to themselves, for coolness.
Aside from the tiny faction of cranks who can always be found at the bottom of a review list in the one-or-two-star strata trashing whatever the book, because it's what they do, the negative reviewers I'm talking about, the ones I think I'm onto, I think were genuinely nonplussed by the book they're damning with scant stars. They were dismayed and disappointed, they felt cheated, condescended to, culled and excluded. They chose an Ed McBain novel expecting a good, methodical cop story by a world-recognized master of the form.


Those who knew a little about this type of novel, might have expected what is known as the “police procedural” approach, especially with McBain's best known work, his 87th Precinct series. Rather than the classic whodunit, a procedural traditionally follows the police as they attempt to prove how the crime was committed—a “howdunit.” That's what I thought my first 87th Precinct novel would be. Not a mystery but a howdunit. I was hoping to follow the cops in the Eight-Seven Squad, as they called themselves, as they set about finding and securing the evidence that would nail the bad guy.
This isn't what I found in my first 87th Precinct novel. I seemed to have stepped into a place where everyone somehow knew each other, and I was odd man out. Like those recurring dreams where I walk into a classroom for the first time, on final exam day. I felt all of those negatives I listed above—dismayed, cheated, culled, etc. Had the Internet been invented yet, had Jeff Bezos been long enough out of diapers and running Amazon by then, I just might have left one of those one-or-two-star customer reviews expressing my dismayed befuddlement over whichever 87th Precinct novel I'd read, or started to read. I have no idea which one it was. All I remember is it wasn't what I thought it was going to be, and I never read McBain again. Until last week.
Last week I read The Last Best Hope and Widows. I enjoyed them immensely. Both of them. Five stars for each. And now I think I know why McBain didn't work for me when I first read him, and why he does now. It's his voice. It's overwhelming, his voice. Narration in the two McBain novels I read last week and the one I just started (I'm a slow reader), There Was a Little Girl, is a stream of consciousness that starts out seemingly above the action but soon slides into one or more characters, who might break into direct speech for a sentence or two and then go internal, into thoughts, and then the aloof narrator is back as one of the characters, as if the mind of the voice is inside the character's head. Time sequences shift abruptly, from the present to the past. One character's talking, then another picks up in mid-sentence from sometime in the past. The switches happen so quickly and among so many different characters and voices—narrator, voice, internal, direct, in, out and out and about. What amazed me is when I realized McBain is a ventriloquist in print, with multiple “dummies.” His voice assumes the personality, vernacular and speech patterns of whichever character is speaking or whose head we're in.
If I didn't know better I'd wonder if McBain was really Jonathan Winters or Robin Williams—more likely Williams, because of the speed. The sensation of dropping into the midst of such apparent chaos can be daunting. It was, at first, last week as it came back to me why I'd avoided McBain for so long. But I had learned a few things in the meantime. Had an idea what was going on. I stayed the course and soon got the hang of it. The transitions are seamless and often instantaneous without any cues or extra space between voices or scenes. Speed bumps are only for breathing.
This has the effect of grabbing and pulling us inside as a captive audience with little if anything left to the imagination. Widows, in fact, is a whodunit, but we're not given the luxury of doing much of our own puzzling, as, say in an Agatha Christie or Rex Stout mystery. Not with the detectives sharing their every thought, every aha and misgiving with us along the way. At the same time, the “procedural” aspect of solving cases is more psychological than forensic. The Eight-Seven is more Colombo than CSI.
I'm thinking also McBain didn't work the first time for me because of my absorption then with Hemingway, the 180-degree difference in styles. Wondering now what McBain might have done with a piece like Big Two-Hearted River, which seems by 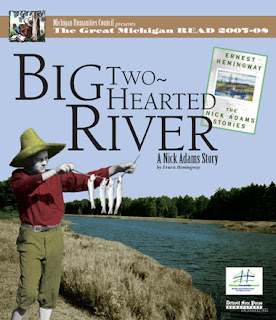 comparison with, say, Widows, more like an outline for a story. It's quintessential Hemingway, though, and what appears on the page are merely parts of the whole, arranged so artfully they trip the reader's imagination into filling in intentionally omitted details. McBain leaves little room for reader participation. He provides a verbal swarm of sensory and cognitive input that takes over pretty much completely. One might as well just sit back and enjoy the show.

McBain is especially good at reproducing the way people actually communicate, what they really say and how they say it. This carries a risk, because nothing can bring narrative to a screeching halt faster than speech filled with ya knows and likes and umms and ahhhs and ers and more ya knows and most of the other nervous tics and habits people display unconsciously in conversation, both formal and informal. One device McBain uses to bring a feel of authenticity to communication among his characters is repetition of certain words and expressions. He repeats words and expressions the way people ordinarily do to clarify or to emphasize what they're trying to convey. Here's an example from Widows:
“Girls like this, they can get in trouble, this city,” Monroe said.
Carella wondered Girls like what?
“You get a young, pretty girl like this one,” Monoghan said, “they don’t know what this city is like.”
“What this city can do to you,” Monroe said.
“This city can do terrible things to young girls,” Monoghan said.
This from The Last Best Hope:
“...the guys have already moved to Florida.”
“Is that what they said? That they were moving down here? Or just coming down for a visit?”
“It sounded to me like it was a permanent move.”
“How do you mean?”
“Well, they said they were going into business together. In Florida . Going down right after Christmas to start this new business. That’s why they were so relieved we didn’t turn this into a federal case.”
“No charges pressed, right?”
“Well, Christmas.”
“So you think they came down to Florida right after Christmas, is that it?”
“Is what they said they were gonna do.”
“Did they say where in Florida?”
“Just Florida.”
“Not Miami, or St. Pete, or…”
“Just Florida.”
The action in The Last Best Hope is split between the good guys and the bad. It's more a caper story, on the order of, say, Frederick Forsythe's Day of the Jackal. As readers we are inside everyone's head as the bad guys work toward bringing off a hefty museum theft and the good guys struggle to determine who is who and what in hell is going on. It can get confusing. It did, in fact, and I cannot explain why I didn't much mind. The Eight-Seven's Det. Steve Carella has a supporting role, so I knew the good guys were in good hands.
The danger in presenting characters in close detail, especially the main ones, is that we might not like them or that we'll grow tired of the voice that animates them. McBain avoids this pitfall, at least in the novels I've just read. With Hemingway the voice remains impersonal. We're given little about Nick Adams, no physical description and precious few clues as to his background, who he is. The Nick I know is pretty much my creation, drawn mainly from how I interpret his behavior in the moment. In fact, he's pretty much me.
Hemingway baits us with a peek here and a glimpse there, enough to bring us into his world, turn us loose and let us find out for ourselves what's there, and we get a sense it's ours. I come away from Big Two-Hearted River feeling refreshed, with the tang of hickory smoke lingering in my clothes and the taste of campfire coffee on my tongue.
I emerged from the two McBain novels I read last week as I would from a theater—familiar voices still carrying on in my head, a satisfying sense of all's well that ends well, and a grin on my face.
So I'm thinking now it was my fault I didn't take to McBain back when I was taking to Hemingway. They were completely different writers. Each achieved mastery in his own approach. The curse that kept me away from the Eight-Seven Squad wasn't McBain's. It was mine.
Posted by Mathew Paust at 3:13 PM